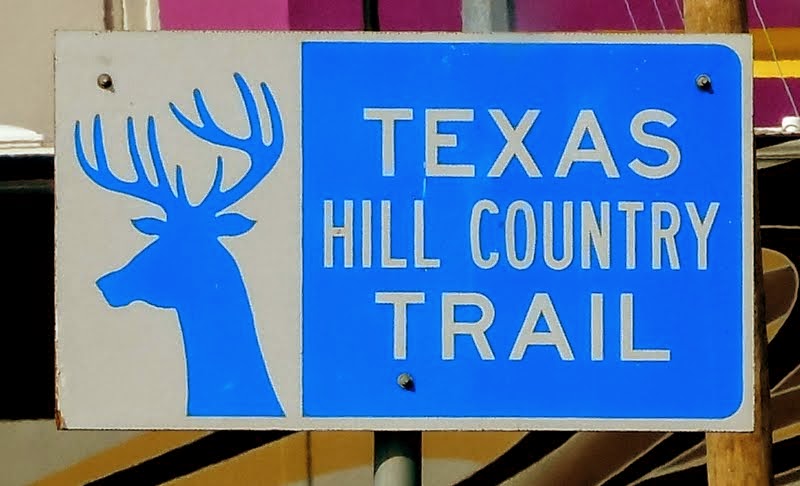 From Austin we made our way through Texas Hill Country to Fredericksburg. We wanted to visit the quaint German-influenced town, tour the National Museum of the Pacific War and take a day trip to the LBJ Ranch.

Those who know us know we don't often travel with an itinerary and rarely have campground reservations ahead of time. Call us "non-committal" if you like but that's the way we like it -- not always, but most of the time. Anyway, upon reaching Fredericksburg and finding our first choice campground filled, we tried our second through sixth choices -- and they were full too!

It took less than 3 frantic minutes to find a nearby town with campground space available. All we had to do was get out of the touristy city of Fredericksburg. We went to Johnson Creek RV Park in Ingram, Texas where the campground is part of a working pecan ranch. The roads are paved, the pads concrete and grass actually grew between the spaces.  We committed for a week. It was a bit farther from the sights we want to see, but the lower price, quiet surroundings and star-filled night sky sure made up for the distance.
Johnson Creek RV Park is a small, family owned property and it has some unusual touches and excellent amenities. We enjoyed our stay there.


Our day trip to the LBJ Ranch was the second time we'd been there. Living in Houston during Hurricane Rita, we evacuated our home and found ourselves driving more than 24 hours, in traffic from hell, to get a place to sleep.  More about that in another post though.
The LBJ ranch is located near (if not in) the town of Stonewall about half way between Fredericksburg and Johnson City. The Johnson's donated the property to the National Park Service, retaining a lifetime right to live there. It is divided into several sections identified as State Parks and National Historical Parks.  We first stopped in at the State Park to gather the information necessary to take the driving tour over the ranch.
President Johnson had strong attachments to places and heritage. He was born on this Texas hill country property, he lived here, died and was buried here. That's the way he wanted it. Lyndon Baines Johnson died at age 64, just four years after leaving the Presidency. His health deteriorated rapidly after retirement and his father had died at a young age. Many said he knew he wouldn't live to be an old man.

After stopping by each of these sights, we drove onto the vast LBJ Ranch property which, does remain a working ranch today -- complete with livestock.
After the death of Lady Bird Johnson in 2007, the Texas White House tour was completed and made available to the National Park Service. Until that time, after LBJ's death, Mrs. Johnson continued to live here. At this point in the driving tour, visitors can see the President's airplane, tour the hanger, see the automobiles and the home of the Johnson's.

The interior of the LBJ home, known as The Texas White House, cannot be photographed. Our tour included a visit to the President's office, living and dining rooms and a walk through the kitchen. The house was surprisingly simple and absent grandiose appointments. The laundry room contained a Maytag washer and dryer set just like the one my mother had in the 1960's. We entered the private bedrooms of both Lyndon and Lady Bird. She decided, after many interruptions in the middle of the night, that she needed her own, uninterrupted sleeping quarters. Neither bedroom was anything more than plain and simple.

The tour takes visitors through the very intimate parts of the Johnson home, including the President's bathroom where there is a telephone on the wall next to the commode. An "Air Force One" towel hung on the towel bar. We saw the First Lady's bathroom too.  Both closets were open and contained their clothes, shoes, hats and other items we have all seen in photographs.  It was a strange thing to see the President's personal belongings. It seemed as though they might walk in to see us looking at their private lives.

The bed where the former President died is there -- complete with the white bedspread. The tour guide explained that President Johnson laid down for a rest after getting up early to meet with his ranch foreman. Mrs. Johnson was in Austin. Lyndon Johnson died alone and unattended.

After our tour of the Texas White House, we finished the driving tour of the ranch and made our way back to the campground at Ingram.
Email ThisBlogThis!Share to TwitterShare to FacebookShare to Pinterest