White Sands National Monument and Beyond

A great natural wonder lies at the northern end of the Chihuahuan Desert in the Tularosa Basin. It is a great, glistening white natural wonder of wave-like dunes of gypsum sand. At well over 250 square miles, this area is the largest gypsum dune field in the world. It can easily be seen from space.

That's why we've come to Alamogordo and that's where we're headed today... 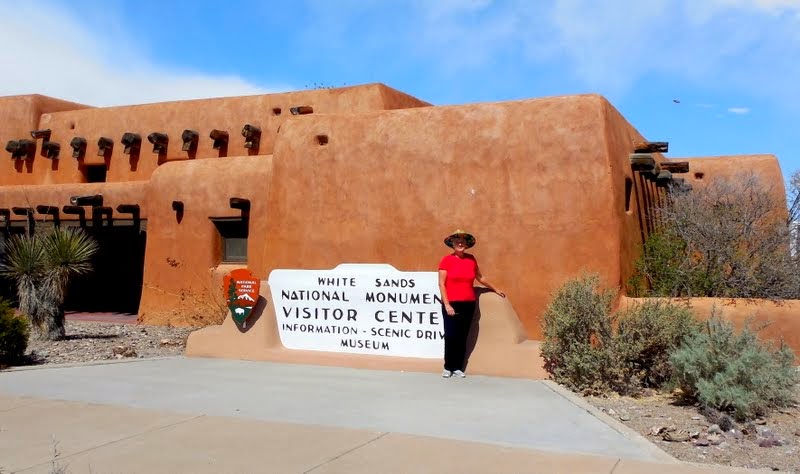 The White Sands Visitor Center is said to be an historic adobe building so we strolled through it, looked a few souvenirs, books and listened to a little bit of the orientation film.

Whit Sands National Monument is surrounded by the San Andres Mountains to the west, Holloman Air Force Base on the east and White Sands Missile Range to the north and south.  Visits to White Sands are not allowed when missiles are being tested but those times last only a couple of hours.

To visit White Sands National Monument, we took the Dunes Drive from the visitor center about eight miles.
About the gypsum (directly from the brochure here). The common mineral gypsum hydrous calcium sulfate is rarely found as sand because it is soluble in water. Rain and snow in the mountains dissolve gypsum from the rocks and carry it into the Tularosa Basin. River would usually carry dissolved gypsum to the sea, but no river drains the Tularosa Basin. The water, with the gypsum and other sediments is trapped in the basin.

﻿
A little more about White Sands Missile Range (also directly from the brochure). It was first used as a military proving grounds after World War II for testing rockets captured from German armed forces. The 4,000 Square mile range is still an important site for testing experimental weapons and space technology.
We explored the entire drive by car and then stopped on the way back for a closer look at  dunes that were most interesting to us.

The day was warm and happily without wind which surely would make a visit to White Sands pretty miserable. By late afternoon we returned to the campground, passing several pistachios farms along the way.  There are several farms here that offer guest tours.

Boot Hill RV Park at Alamogordo was home to us for only three nights. The gravel campground was tough on Lexie's tender little feet. On the fourth morning, we pulled up stakes and headed north on Highway 54 to Carrizozo then west on US 380 where we crossed the Valley of Fires. The scenery was pretty spectacular!

The Valley of Fires is 270 miles altogether, along a route of barren scenery of grassy prairie, stark mountains and sandy desert. This part of the long Tularosa Valley has buckled, twisted basalt lava, part of an extensive flow up to 165 feet thick.

We passed extensive overgrown lava flows that were dotted with yucca, cacti and other desert plants.

Today's route took us around Albuquerque and almost to Flagstaff before turning north.  More beauty to see as we drove toward today's destination which should have been Winslow, but instead was Page, Arizona. The day was much too long but we enjoyed it. 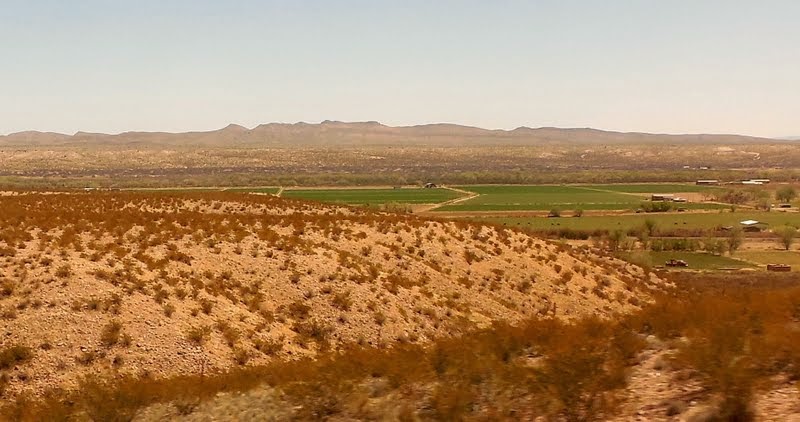 Much of our late afternoon travel was through the Navajo Nation.  Late in the afternoon, we learned  our tentative plan to stop in Page, Arizona  on our way to Utah was thwarted. Campground full.  We made another telephone call and found availability at a place called Wahweap Marina and Campground on Lake Powell.  We hadn't done any research on this place, but we'll head there and see what's there to see.  Come along, won't you?
Email ThisBlogThis!Share to TwitterShare to FacebookShare to Pinterest