For the next few days, we're staying at Bauer's Campground in Glendale, Utah which we think is a pretty good base location for visits to Zion and Bryce Canyon National Parks. The north rim of the Grand Canyon won't be open until May 15th, we learned recently, so it's uncertain if we'll see it on this leg of our journey. As usual we didn't do any research before we came so everything is a surprise.

The days are warm, but I wouldn't say they are "hot" -- and the nights... well the nights can get downright cold as is evidenced in the photo above.  Sprinklers make ice and it is a beautiful sight against the deep green of the fields here.

Our day trip to Zion National Park will not cover the entire park.  Here's why: From April through October, access to Upper Zion is available by shuttle bus only. Our campground  is too far away to leave the dogs in the coach at the campground and the car would get too hot to leave them in it while we shuttle to and fro. So we will be content to travel (with the dogs) in our car along scenic Zion Park Boulevard and then south to Springdale, Utah. We packed a lunch to eat along the way.

Coming from Glendale, we'll be taking the road less traveled of Zion. It's an escape from the crowds.  The east gate of Zion is open all the time and we encountered no traffic backup into the park.

We passed through two tunnels in Zion National Park. The first, in the picture below, was short and easy. The second, known as the Zion/Mt. Carmel Tunnel, was not an easy ride for me. It's a 1.1 mile stretch that was begun in the late 1920's and completed in 1930. At the time of it's completion, it was the longest tunnel of it's type in the United States.  It was built as part of the Zion-Mount Carmel Highway to create a direct access route to Bryce Canyon and Grand Canyon from Zion National Park.

Along about 1989, a study of the many accidents and near accidents in the tunnel uncovered a not-surprising fact that today's larger vehicles couldn't maneuver the curves while meeting oncoming traffic without high risk of collision.  Solution:  Traffic control and escort through the tunnel for large vehicles.  I would have gone directly into hyperventilation if we'd taken big Endie through it. 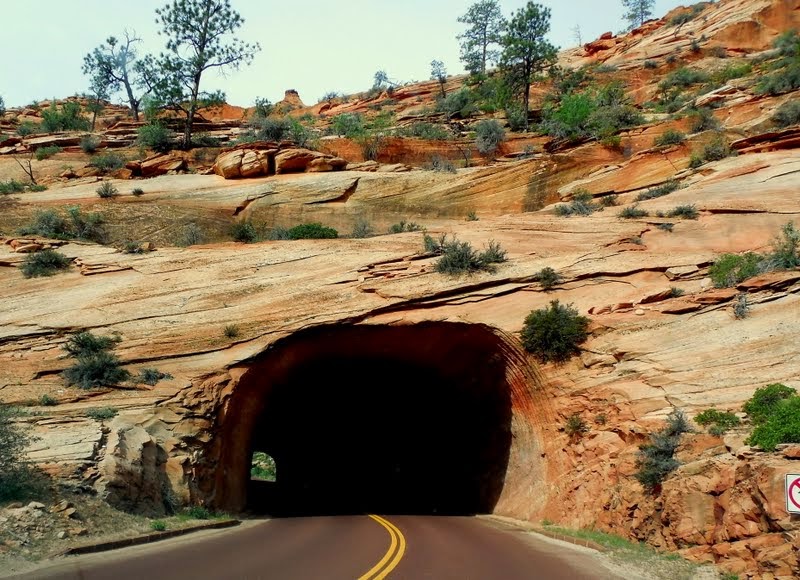 Zion is the oldest and most visited of the national parks in Utah and has some pretty spectacular scenery. The brochure boasts "deep sandstone canyons, striking rock towers and high mesas and plateaus".  My photos below attest to that claim. 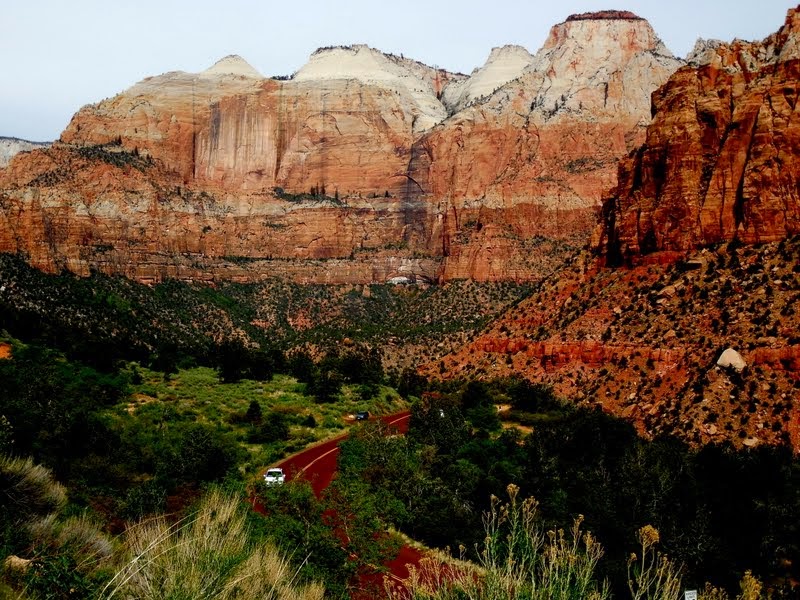 These pictures were taken along the many "switchbacks" on Zion Park Boulevard. Even the roadways are picturesque in shades of red, just like the cliffs we're here to see. 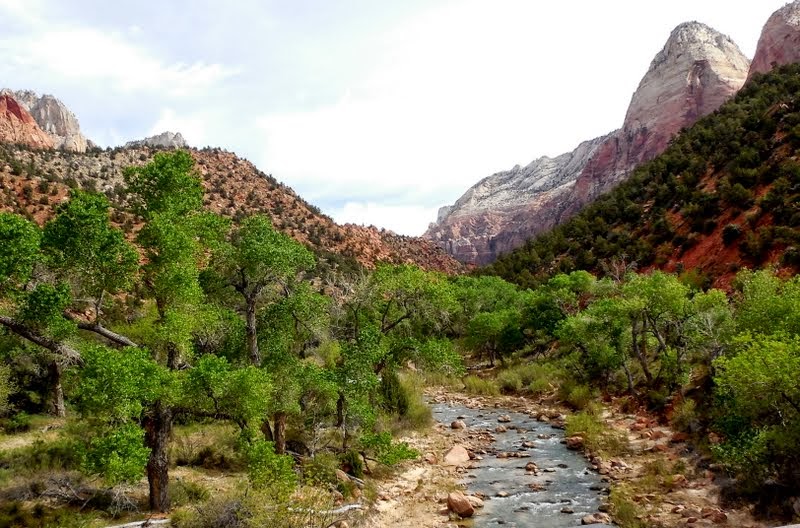 To our surprise, and dismay, upon reaching the southeastern gate to Zion, we found miles of cars lined up at the entry gate. Without a way to U-turn, we knew we too would be in the great line of visitors to be checked into this gate. We opted to take the large circular route that would lead us through several small towns, into another part of Zion National Park, through Dixie National Forest and back to Glendale.  It was a good decision as we found the best yet to come!

Route 9 would take us through Springdale, Rockville, Virgin and LaVerkin and Hurricane before we took I-15  north to Zion Kolob Canyons.
Zion's Kolob is home to unique finger canyons, soaring cliffs of red Navajo sandstone and deep pocket canyons. The colors were even more intense than those we'd seen in the larger part of Zion National Park. The deep red roads continued here too. 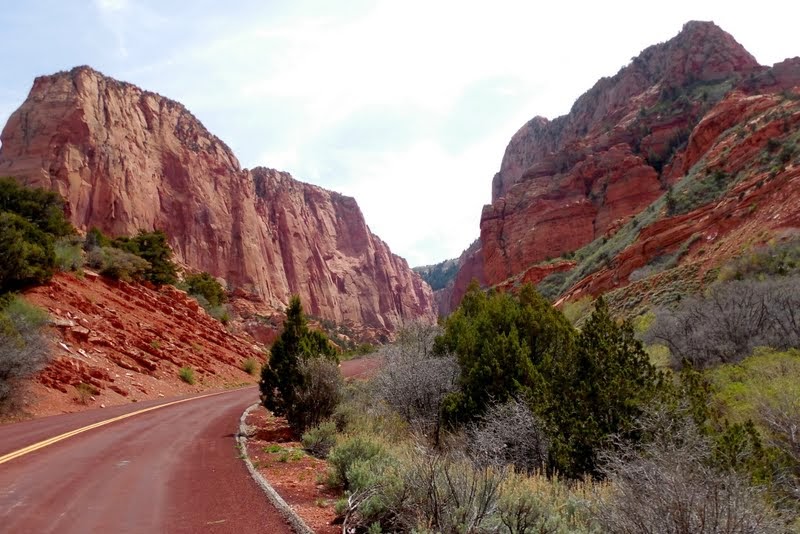 Through the four mile drive into the Canyon we crossed a major fault line which, it is said, is responsible for the creation of the great plateau from which Zion was born. An enormous natural cutaway of the Markagunt Plateau, the spectacular "finger canyons" display the oldest and youngest rocks in Zion, as well as its tallest peak, Horse Ranch Mountain, at 8926' elevation.


Anasazi, meaning "ancient ones" were the first to inhabit the Kolob Canyon area. It's unknown why they disappeared but the Paiutes next settled here and they still consider this a sacred place.

Kolob was explored by the Spanish but the Mormon pioneers settled the area in 1852. They harvested timber, raised livestock and prospected here.  In 1937, the Canyons were set aside for protection as a national monument. It was added to Zion National Park in 1956. 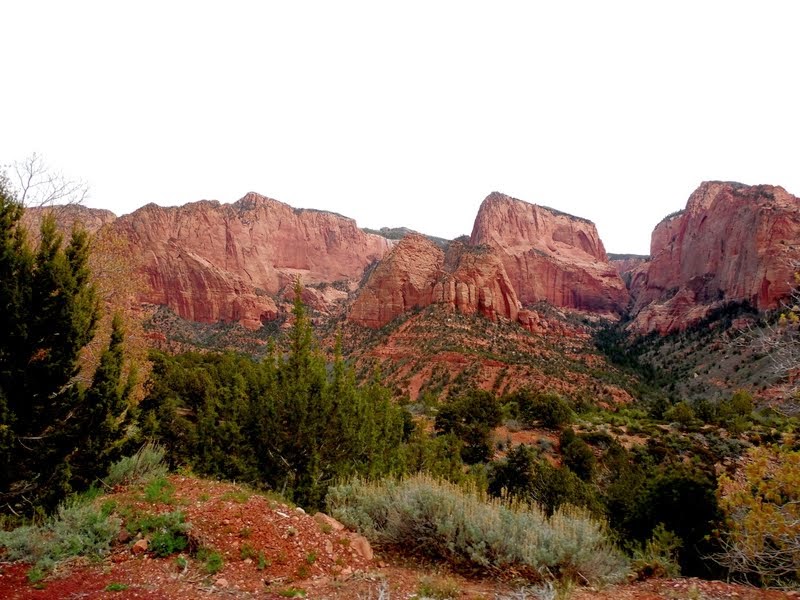 Our route through Zion Kolob traversed a lovely ridge line and we climbed some 1,000 feet to the Timber Creek Overlook. From here, there's an absolutely breathtaking view of the Kolob Terrace. 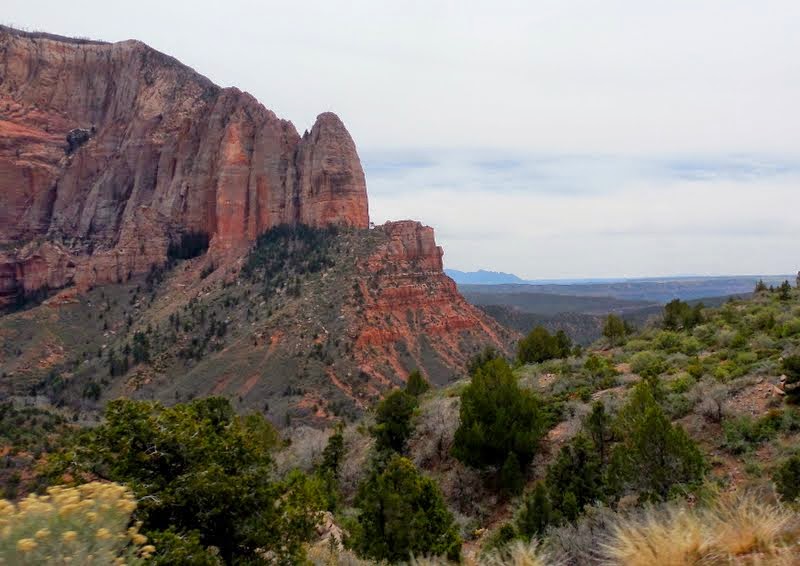 There are many hiking trails, some as much as 15 miles, through Kolob Canyon. We could see many of them from our perch along the roadway.  I couldn't help but wish we could take a nice long hike through this beautiful park.

But alas, the tour of Kolob Canyon ended and we returned to I-15 north to Cedar City.

From Cedar City, we took part three of our four part drive back to Glendale. This was Highway 14 through a part of Dixie National Forest, past Navajo Lake and through Duck Creek Village. The grades were severe and there was plenty of snow remaining for us to see.

We are considering a day trip to Bryce Canyon in the next day or so. Hope you'll come along if we go.
Email ThisBlogThis!Share to TwitterShare to FacebookShare to Pinterest