Glitter Gulch. Sin City. Lost Wages. Whatever name it's called, LasVegas was never our our list of places to visit. We're too stingy (or maybe too smart) to gamble and can't stay awake for the entertainment at night. Our alcohol consumption is minimal and the sight of drunken people disgusts me.

So why did we even stop here? Because we were nearby, we've never been here and it's right along I-15 --going our direction.  Being a fan of old movies and a nostalgic person, Wayne was interested in seeing some of the first landmarks, including Vegas Vic, now part of the Fremont Experience, Caesar's Palace, and some of the newer buildings. Seeing the strip would be worth a day or two even though we're really tired of being dusty.

The Fremont Experience was our first afternoon's destination. We lucked upon a shady parking place, put the dogs into the carriage and walked up a filthy sidewalk into the pedestrian mall along several blocks of Fremont Street that make up Fremont Experience.  It dawned on me that the streets never even got rinsed because it never rains here.  I was reminded of the dirty streets of Key West and the French Quarter in New Orleans -- and it rains there at least.

We hadn't walked 50 yards under the giant canopy of the Fremont Experience before a slender young woman wearing only a pair of pasties, a G-string, high heels, an orange wig and black velvet cape spotted Lexie and Ozzie in their stroller. She ran toward them with arms outstretched. She stooped and loved on both dogs and told me about her childhood pets. She was from Texas, had no family and had been homeless in Arizona for seven years before finding her way to LasVegas. She lives on tips paid for posing in this outrageous get-up. Her lips and short fingernails were the same orange color as the wig she was wearing. Her language was colorful and she was quick to pull the cape over her exposed front when she saw anyone trying to snap a picture without paying.

I wished her well and tried to walk away but she walked with us. What a sight we must have been, a couple of retirees (and certainly dressed like it too), pushing a dog stroller with this very-nearly-naked woman walking and talking like we were old friends.  But finally we did break away but saw her again within a few minutes and she threw up her hand and smiled.  I'll probably not forget that Fremont Experience. No, I did not take a picture of her.


The second day was spent exploring the new LasVegas Strip and we began in the gargantuan Caesars Palace complex of hotels, restaurants, gaming parlors and shopping areas.  It's an impressive property. 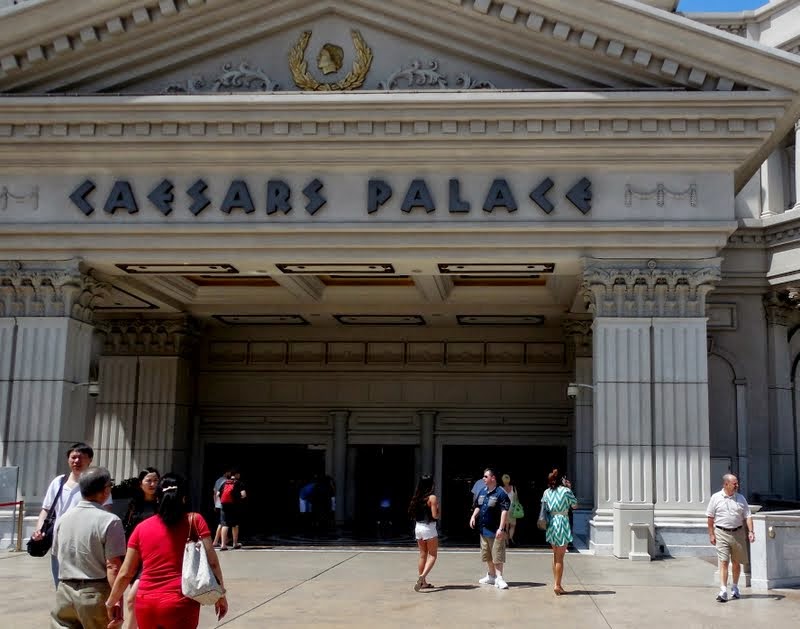 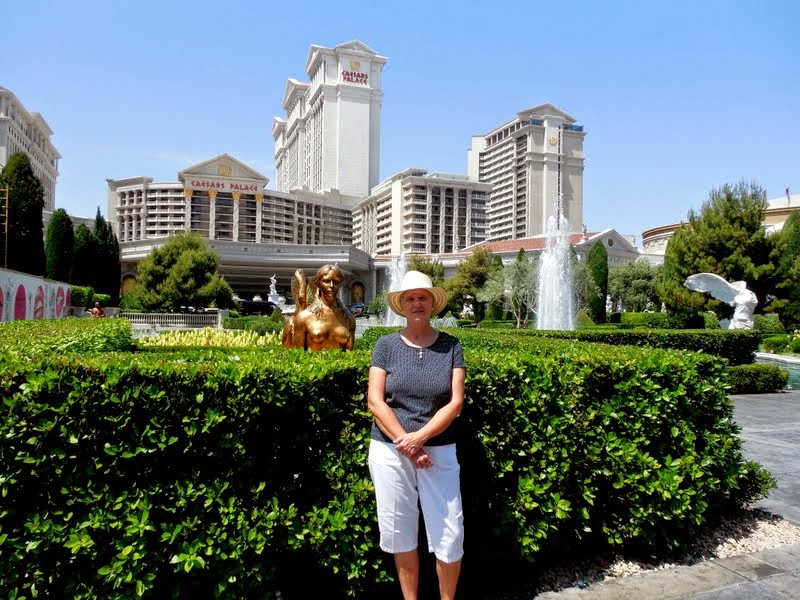 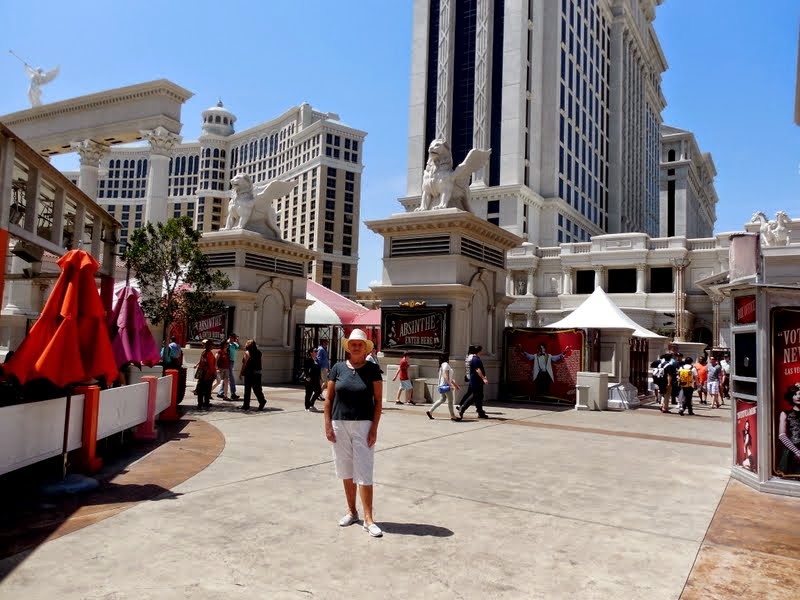 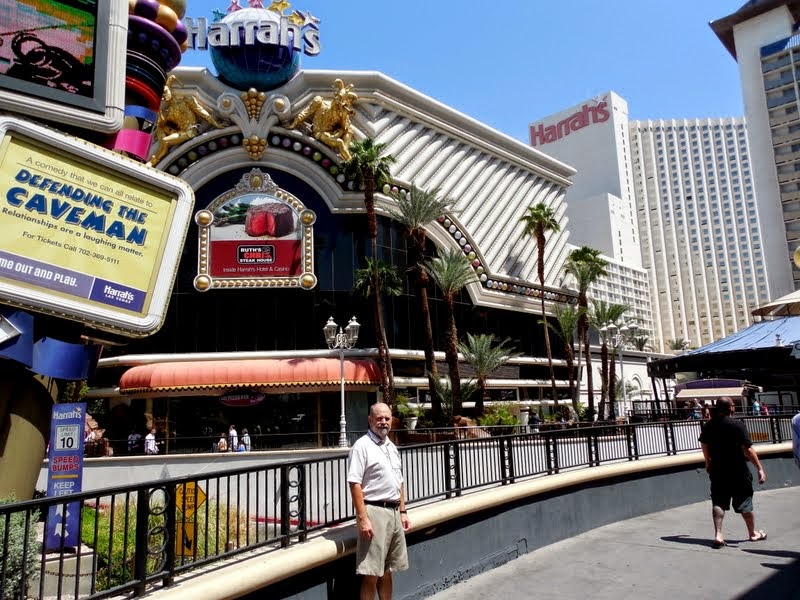 There are some pretty cool things about the LasVegas strip. In particular, I like the way traffic is managed. There's no street parking -- only moving vehicles use the pavement.  Pedestrians cross mostly on overhead walkways, though there are a few street level crosswalks.  Covered parking is free at any of the strip hotels and that's nice too.  Especially in this heat.

The LasVegas transit system is a thing of beauty too.  Take a look at Mega Bus; it's clean, quiet and has huge clear windows and it looks like everybody rides these things. 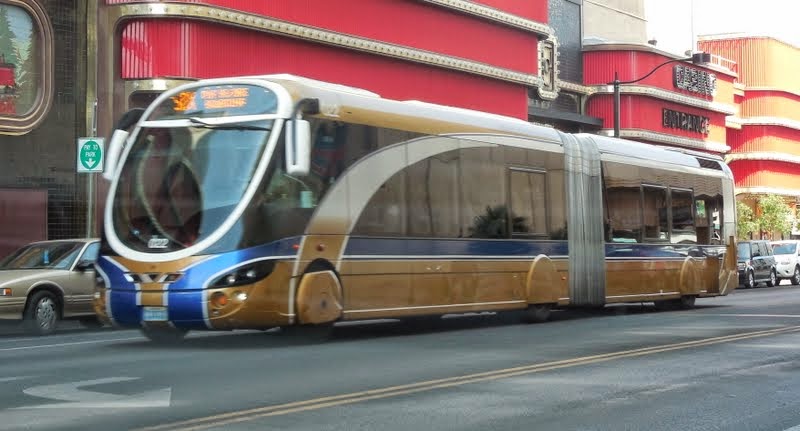 Our last full day at LasVegas was Easter Sunday and the Hitchin' Post campground kicked off the holiday with a "Jello Shot" hunt.  Hummm. We didn't participate but saw lots of people scouring the place for the treats. In the afternoon, temperatures soared to around 90 degrees and the jello shots continued. Wayne wanted to take a dip in the salt water pool before taking a cool shower but changed his mind when a loud, clearly drunk woman's vulgar obscene language deterred him.  A couple of hours later, as we walked the dogs, the "now even more drunk" woman was walking and swearing and, in a fashion most unlike Wayne, he told her to "shut up".  Well.... that really opened a can of drunken worms as her man friend, who was equally as drunk, jumped into Wayne's face and began with threats.  It was quite a sight. In the end, the drunken man pushed Wayne and the woman's vulgar language became even louder and more vulgar.  After several minutes and plenty of threats, the drunken couple walked away as did Wayne and I.  It was a memorable experience and I still can't understand why Wayne thought it a good idea to lecture a drunk on volume control.  At any rate, I reported the incident to the campground management and suggested they rethink the "jello shot" Easter hunt next year.

But it is LasVegas, after all.

In the end, we didn't take a gondola ride, see the nighttime fountains, volcano eruption, see the view from atop the Stratosphere or even the neon mob museums.  But we did visit LasVegas and because I've written about it here, it's clear that "what happens in Vegas" doesn't really "stay in Vegas".