Heavy and frequent rainstorms are expected to move into the area tomorrow so we took a nice long sightseeing drive south from Convent on River Road east of the Mississippi River today. Having seen so much of New Orleans during the years we lived in Baton Rouge we won't revisit there but instead, we'll head south to the parish line. Incidentally, Louisiana is the only state in America that refers to the geographical areas equivalent to counties, as parishes.

Less than 2 miles into our ride, we came upon a very nice setting and caught a glimpse of a small painted sign for the Oaks of St Joseph.  A chain was stretched across what appeared to be an old entryway. This looked like it could have been a plantation setting but no home was at the end of the tree lined lane. Instead there was a statue. Directly across the street we could see several beautiful old buildings neatly kept on a lush green garden. Several signs indicated that "Visitors" were "Not Allowed"  ... interesting.  We wondered out loud why they didn't just close and lock the gates instead of leaving them open with a sign posted.  Hum.


A nearby historical marker described this place as Manresa House of Retreats apparently a Jesuit retreat for spiritual development of the laity since 1931.

In earlier times this was Jefferson College property but the institution failed. The buildings were later used as Louisiana College but it also failed.  The presidents house (not pictured) and the gate houses (perhaps the two buildings on either side of the photo) date back to 1835 and the main building (I'm guessing the large building in the center) was built in 1845. Federal troops used the property 1862 to 1864 during the Civil War. St. Mary's Jefferson College operated on the property from 1864 'till 1927.  In 1931, the Jesuits bought the property and have conducted retreats here since that time. Some 5,000 laypersons and priests use the facility every year.

Just down the road from Manresa House of Retreats we stopped below this Mississippi River bridge. We walked to the crown of the levee to see the river, but found a garbage filled overgrown area between the levee edge and the main body of water. About that moment we became concerned that drivers above us could throw garbage out and directly onto us so we hurried back to the car... 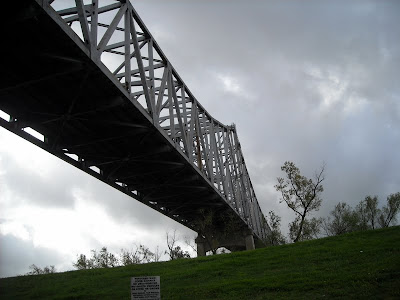 The following photos show some of the scenery along River Road south from here for the next several miles. 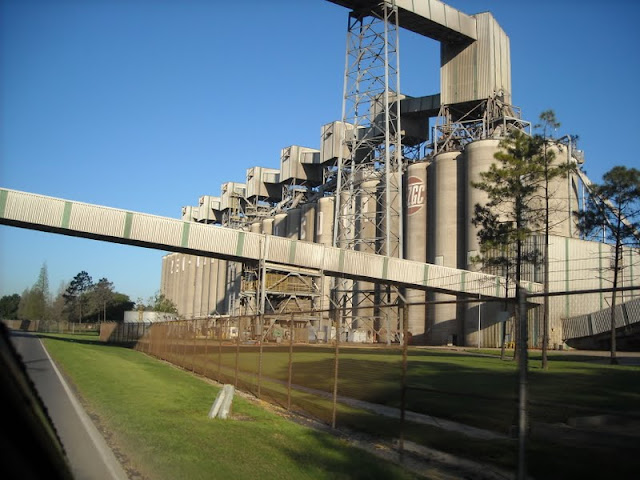 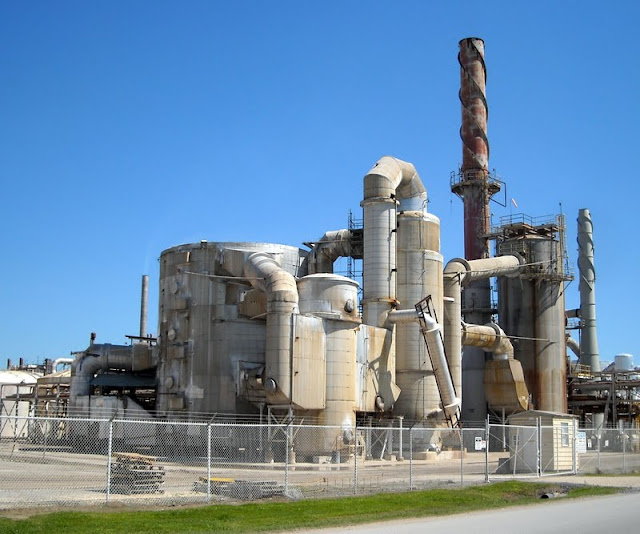 The ride from the bridge to the next stop wasn't a great distance and was only interesting from a curious point of view as the industry is so strange looking.  Any way, we came upon another of the famous old plantation homes along the road.
San Francisco Plantation House boasts itself as the most opulent plantation house in North America. It is a Creole, open suite style mansion. Like most other Louisiana plantations, it is surrounded by Live Oak trees.

The story of San Francisco Plantation is that the land was part of a huge "land and slave" purchase by a free black man who speculated on the property, selling it to a man named Marmillion for $100,000; a whopping $50,000 more than he paid.

Edmond Marmillion added yet more land and slaves, and operated a sugar production facility during the 1850's.  His wife, Antoinette (same as me) and six of the couple's eight children, died of tuberculosis within 20 years.

After his wife's death, Marmillion's sights turned to making a tribute to his family by providing a home for his two surviving sons. He completely renovated the sugar plantation home.  It would include five hand-painted ceilings, ornate painted door panels, marble and elaborate wood grain throughout.

Edmond Marmillion passed away a year after the renovations were complete and the next half century left the plantation in a constant state of turmoil among the two surviving sons and relatives.

After a great flood in 1927, the Army Corps of Engineers began building the levee system along the Mississippi River. The levee took the luscious front yard and gardens that were originally part of San Francisco plantation and very nearly claimed the home itself. If not for the lobbying efforts of local residents, this and many other of the plantation homes along the river would have been sacrificed to the levee.

In the late 1970's the home was purchased by Marathon Oil, who owns it still today. A huge restoration project was begun just after that purchase. It was about this time that the house was placed on the National Register of Historic Places. 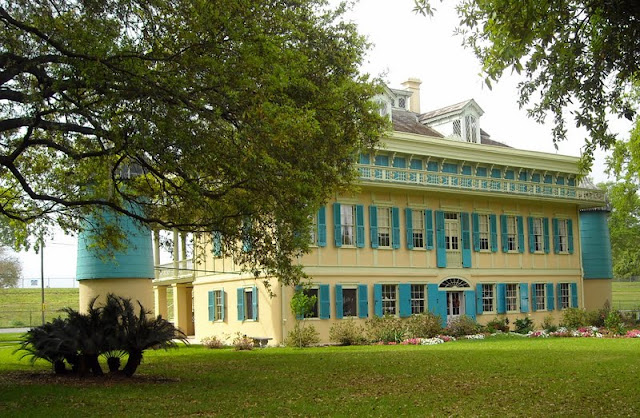 San Francisco Plantation was the last of the beautiful sites along today's ride.  Here's the remainder of the sights we saw. 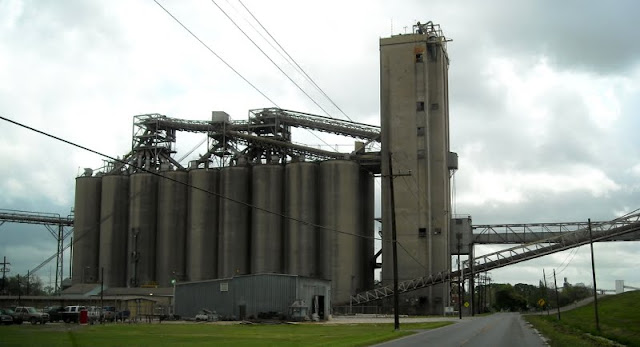 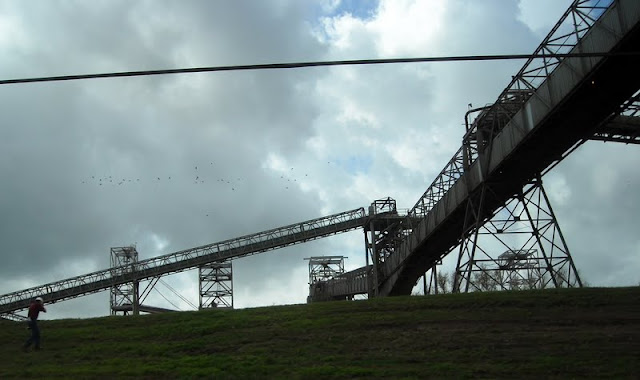 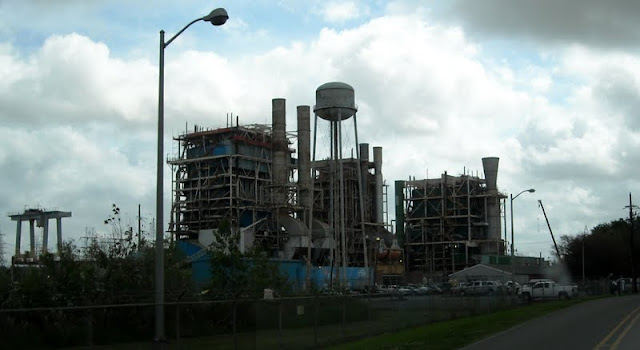 By this time, we were famished and stopped for a bite of lunch at a 'hole-in-the-wall' diner.
After lunch we came upon what I call "America's Most Dreadful Bridge" -- the Huey Long. Happily, it's under construction, I certainly hope they are widening it.  We traveled across this bridge back in the 1990's and I think that crossing is the cause of my dreaded 'bridge phobia' of today.

We found our way back to Poche Plantation Campground along I-10 and I snapped a few more pictures of interesting Louisiana scenery.