First Monday Trade Days in Canton, Texas is actually held on Thursday, Friday, Saturday and Sunday BEFORE the first Monday of each month. Trade Day hours are: Sunrise to Sunset.

In the 1850's , the trade day was held on Monday. That's when the circuit court judge stopped in Canton to hold court.  People from the surrounding areas came to town to watch court proceedings and take care of business. They brought livestock, produce and farm equipment to trade.

In the very early trade days, horses were the most traded animal at Canton's First Monday Trade Days, but in the 1940's with tractors replacing horses on farms, pigs became the popular trade item.  Later it would be hunting dogs. At one time the name of Trade Days was actually changed to "Dog Monday".

Currency was not used in the early days of the sale as participants literally traded goods instead of buying.  During the 150 year history nearly everything imaginable has been traded.  At one time two couples met at Trade Days and eventually decided to trade spouses and took their request to the County Clerk to make it official.  I don't know if the trade actually took place...

I'd heard about Trade Days at different times during our travels, but got a little more information from Tammy when we were at The RV Shop last week.  I did some research as we got into Texas and got the scoop.  We would be arriving at just the right time to take in this monthly spectacle.

Here's a sampling of what we saw...

In addition to the more than 100 acres of trading space, Trade Days has space for more than 2,000 campsites -- with hookups.  The price is reasonable but we didn't know all this going in so we are not patrons of the camping grounds.  Wish we were though.


Lexie and Ozzie ride very well in their stroller; Ozzie watches all the goings on while Lexie mostly naps. They did get out several times for walks and a bowl of water (Wayne sees to all this).  Only one episode really scared us.  When a big Yellow Lab walked past real close, Ozzie got excited and literally leaped out of the stroller.  I think he was as scared as I was because he stood real still, tucked his tail between his legs and waited for me to pick him up.  Of course, the Lab was totally uninterested in Ozzie and never even noticed that he had jumped out...
﻿ 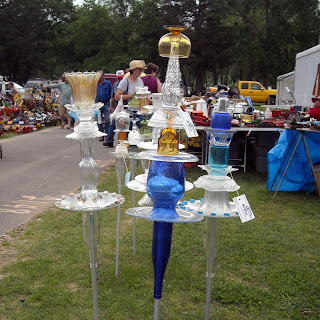 Although we looked through hundreds of booths, we didn't find a thing we couldn't live without so after four hours of roaming among the grounds we left with only having bought two hot dogs, soft drinks, chips, an ice cream cone and a fried peach pie. We ate them all right on the spot.