A large group booked all available spaces at Lakeside RV Park in Livingston for the weekend so we pulled up stakes and relocated to Convent... about halfway between Gonzales and LaPlace, Louisiana. Convent (pronounced Couvent in French) is the seat of Saint James Parish and is in the heart of Cajun Country.  The town, first called Baron, was settled around 1722. Convent is situated on the east bank of the Mississippi River and is just 16 feet above sea level.

We are staying at Poché Plantation Campground and this is our campsite:


The current owner of Poché Plantation calls it a "full service resort" and advertises a Bed and Breakfast along with the large but somewhat cluttered, overgrown and dusty campground.  Throughout the area, statues, art oddities and tree carvings like these are seen... 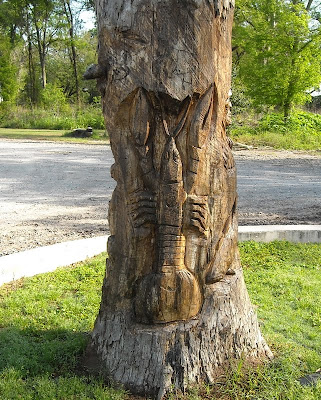 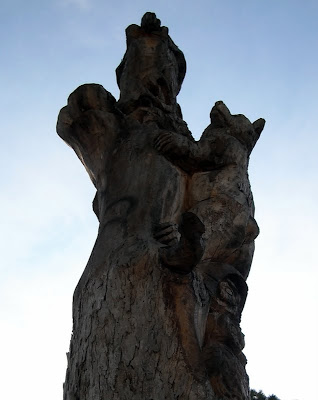 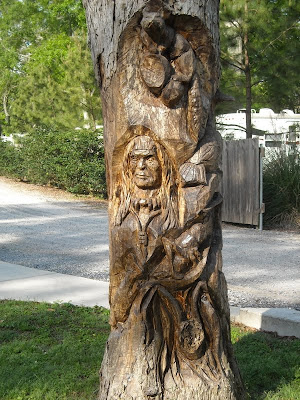 About Poché Plantation Home...
Poché Plantation is architecturally unusual with Victorian Renaissance styling. Most plantations in this area are more along the Greek revival style. Poché Plantation is located along Highway 44 directly across from the levee of the Mississippi River. It's on the National Register of Historic Places. 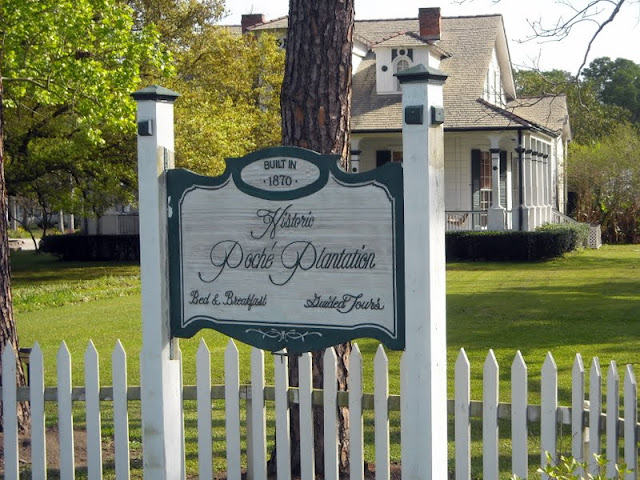 Judge Felix Pierre Poché built the namesake plantation home in 1867. Until that time, the land was a 160-acre sugar cane plantation. Poché maintained the plantation as a residence until 1892 when he moved to New Orleans and sold Poché Plantation to Judge Henry Himel.

Poché was an attorney, Louisiana Supreme Court Justice and co-founder of the American Bar Association. He was distinguished in his lifetime for work in the courtroom and as a diarist on the battlefields during the Civil War. His famous diary and it's detailed description of the world of a Confederate in Louisiana during the Civil War made him a controversial figure. Judge Poché wrote his Civil War diary in French. The diary which has been translated and published has long been an important resource for Civil War scholars. It is exceptional because there are only a handful of Confederate diaries describing the Civil War in print.

Locals have deferring opinions of Felix Poché. Some speculate he was a Northern spy.

As campground guests our visit here includes a tour of the mansion at which time, we met the current owner, who boasts he bought the property at absolute auction in which he was the only bidder.  Mark is a Louisiana native whose diction is undoubtedly authentic Cajun.  It took some time to get accustomed to his fast speaking dialect and understand everything he said.  He has a wonderfully refreshing humorous style, claims no serious knowledge of the history of the plantation home and kept us all in stitches during the tour.

The second floor of Poche Plantation is available to guest to rent for a weekend and the price seems fair at $249. We snapped a couple more pictures here...


The mansion tour lasted nearly two hours and we were ready for lunch when the group finally broke.We retrieved Lexie and Ozzie from the coach and headed out for a sightseeing drive and lunch. 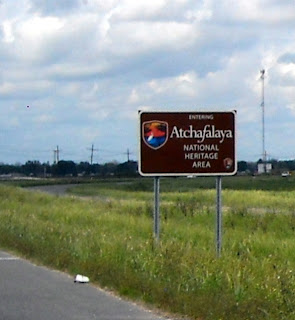 Tomorrow we'll try to see the church and cemetery down the road.