We enjoyed twenty days in Auburn before deciding to move along.  Seventeen days were spent in Chewacla State Park after staying the first three in "Camp Chaos" on Auburn University property.  To our surprise the state park was only sparcely populated during the week and most visitors were just overnighters. 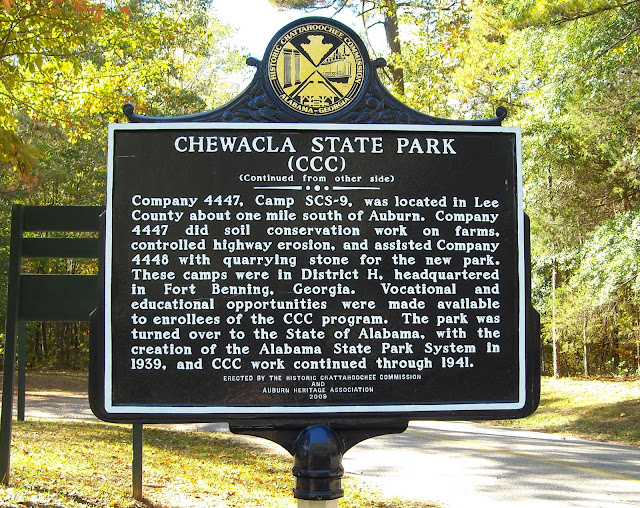 Wayne enjoyed getting several chores out of the way while we were in the area.  The trips to Eclectic alone were enough to make great memories. Additionally, he managed to find a place for his Glomeratas.  He gave them to the alumni association. I'm glad to get rid of the added weight.

Another chore crossed off the list was the transmission fluid level in Blackie.  After learning about the potential problem caused by flat towing, we did a great deal of research and had to deal with ignorant service technicians at the local Ford dealer.  They argued that lowering the fluid level would void the warranty.  We found both on an online technical service bulletin and in the standard owners manual, the lowered fluid level was recommended by Ford.  Fortunately, when he took Blackie back, armed with this information, they made the adjustment.  Now we'll just keep our fingers crossed that we've done it all correctly.

So after the three week stint in the lovliest village, we checked the extended weather forecast to find rain and cold weather were about to blanket the southeast.  We chose to drive to our new destination on the rainest day.

We had tentatively planned a trip to FamCamp Military Campground down on Tindale Air Force Base in Panama City.  When Tom and DJ checked on sponsoring us there, it was learned that the campground was closed to sponsored guests during the high season.

We decided to go on to Eufaula, Alabama to enjoy a stay at one of the Corp of Engineers campgrounds for a few days....
Email ThisBlogThis!Share to TwitterShare to FacebookShare to Pinterest