Hearst Ranch, the gargantuan estate of William Randolph Hearst is at San Simeon, about 25 minutes from our Morro Bay campground. Next week, we plan to spend a few hours touring the property, but today, we took this picture as we drove by on Cabrillo Highway.
After making our plan to visit Hearst Ranch and tour the castle in a few days, we stopped for a bite of lunch before continuing the ride north along the coastal highway.

We've been told that northern elephant seals are spending time on the beaches about seven miles up the road. That will be our next stop today.

These are extraordinary mammals, spending as much as ten months each year diving to depths of 5,800 feet for as much as two hours at a time. They migrate thousands of miles twice a year to this rookery where they breed, give birth, molt and rest. The one-month molting period for northern elephant seals is April through September.


I could have never guessed there would be so many seals in one place. Clearly, they number in the tens of thousands. They come here from the middle of March until September to molt -- that is to grow new hair and skin, shedding the old.

While the northern elephant seals are in the rookery, they fast – no food or water for the duration of their stay. Fasting necessitates a quiet life, lots of sleeping, not much moving around we were told. Surprisingly, there was lots of movement the sunny afternoon we were there.

A non-profit central California group, Friends of the Elephant Seal, is dedicated to educating people about the elephant seals and other marine life and to teaching stewardship for the ocean off California. Their website is informative and their work is important. The group has a live video camera for watching the seals in real time.  I've added the link below.

To see live activity of the elephant seals at San Simeon via E-Seal Cam click here.

The north-south California roadway we're traveling today runs alongside much of the Pacific Ocean coastline. It is known by several names... CA 1, Pacific Coast Highway (PCH), Cabrillo Highway and the Shoreline or Coast Highway.

The highway is famous for beautiful scenery -- some of the most beautiful, in fact, in the entire country.  The first section of this highway to open was the part that runs along the remote area of Big Sur. That piece of highway opened in the 1930's. We won't get that far north today though.

The photo below is an example of some of the spectacular rolling mountainous terrain on the east side of the highway as we drive north. It's evident we're getting out of drought-stricken Southern California. 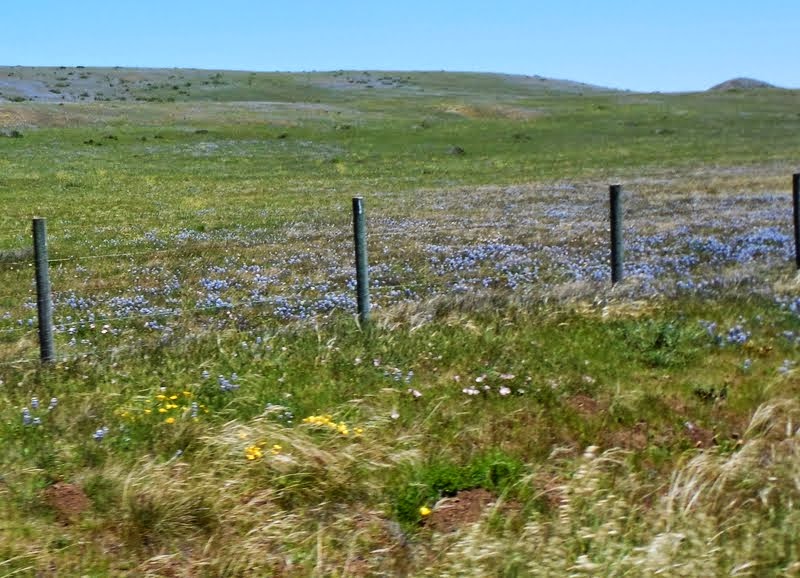 Point Piedras Blancas is just a few more miles north on our ride. The Light Station there is worthy of a "look-see" but unfortunately for us, it is not open today. The gate is locked.

Doing a little research, I learned that tours are given two mornings per week during this time of year. It takes about two hours and costs $10 per adult.  Pets aren't allowed and for safety, guests are not permitted atop the station.

Here are the lighthouse facts:  Built by the U.S. Lighthouse Service in 1875, Piedras Blancas originally stood 100 feet, but now is just 70 feet tall. The lighthouse was particularly important to ships finding their way into and out of San Francisco Bay during the gold rush, I read, but the gold rush was over by then, I thought. Anyway...

The Piedras Blancas Light Station property is now managed by the Bureau of Land Management as an historic park and wildlife sanctuary. The BLM is raising funds to restore the property. Three complete lighthouse levels, the watch room and the lighthouse lantern must be replaced. The $10 million dollar price tag for refurbishing Piedras Blancas Light Station will not be paid by government funds, they say.

Ragged Point and Beyond

Our coastal ride along California Highway 1 continued through Ragged Point and beyond the Monterey county line.We crept around hairpin turns, up and down the hills making very slow time. Ozzie and I tend to get car sick and we got close.  Here are a few of the pictures. 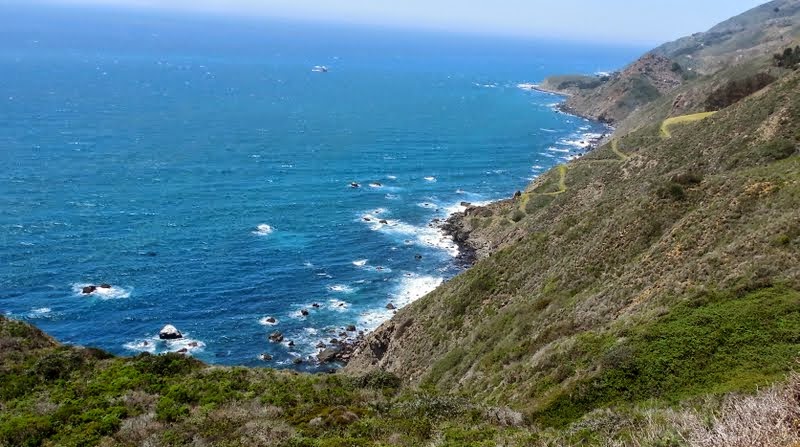 The views were pretty cool but finally we found a suitable place to turn the car around and head back to the campground at Morro Bay.

Back to Morro Bay

Our 94 mile (round trip) drive ended shortly after we rounded a curve approaching Cayucos and saw the familiar Morro Rock. Still at least twelve miles away, it was the first sign that we were nearly back to the campground.