A visit to the unbelievably ornate Hearst Castle was our agenda item today. Its construction is one of the most ambitious architectural endeavors in American history. The castle is located at San Simeon, about 25 minutes north of Morro Bay on California Highway 1, Cabrillo Highway. We've allowed four hours for the drive, tour, grounds visit and the movie that's included in the ticket price of $25 per person.


The story of Hearst Castle reaches back to 1865, when George Hearst, father of newspaper magnate, William Randolph Hearst, purchased 48,000 acres of California coastline ranch land. A self-made millionaire, George Hearst bought the land with wealth he acquired by mining California silver as a young man.

George Hearst died in 1891 and his wife, Phoebe died in 1919, leaving the property to their only child, William Randolph Hearst. Hearst Ranch had grown to more than 250,000 acres by that time. For most of his life, W.R. Hearst enjoyed camping excursions on this central California coastal hilltop.  In his late 50's though, he began to dream of a way to create a more comfortable, permanent retreat.

...So in the 1920's, Hearst began a twenty-eight year collaboration with a San Francisco architect to begin construction of a home.  By 1947, twenty-eight years after it was begun, Hearst and his architect, Julia Morgan had built La Cuesta Encantada—Spanish for “Enchanted Hill.” Later, the home would come to be known as Hearst Castle. There would be 165 rooms with nearly 130 acres of gardens, terraces, pools and walkways. Despite all that was built here though, the project was never completed... probably never would have been even if William Randolph Hearst had lived beyond the time of his death in 1951.


Everything at La Cuesta Encantada, The Ranch, Camp Hill, Hearst Castle, of whatever you call it, was built to the specification of William Randolph Hearst. His goal was to showcase his massive art collection and share his good life with  friends, most of whom were Hollywood elite, politicians and sports figures.  It is certainly unique, inside and out.


The Hearst Corporation donated  La Cuesta Encantada to the State of California in 1957 and it is now a state historical monument with tours available to the general public.

We opted for the "Grand Rooms" tour to see the opulent social rooms used by Hearst and his guests. This was the recommended starting place for "first timers".

In this room guests would gather before dinner for cocktails and social time.  W.R. Hearst was a stickler for using time wisely, demanding that guests socialize and enjoy time spent on the ranch.

Hearst frowned upon sleeping late and insisted all guests be involved in what he called the property's "amusements". During the early evening gatherings, guests exchanged accounts of their day's adventures.

The Hearst Castle dining room name, "Refectory" comes from the term for monastery dining halls. Its high windows, bright silk banners, and gleaming silver candlesticks convey the atmosphere of a church from the middle age.


The "head" of the Hearst's dining table was "wherever I (Hearst) sit", according to our tour guide.  Hearst typically sat at one of the center places and arranged seating of guests around the table.  Those he chose sat close to him, but those he found to be boring were moved farther away.  Some of his favorite and most frequent guests included Cary Grant and Charles Chaplin.

Below, a close-up of the typical place settings, complete with mustard and ketchup bottles -- just the way W.R. Hearst liked it. He is said to have liked the "informality" of it.  Weird given that he liked living in a castle. 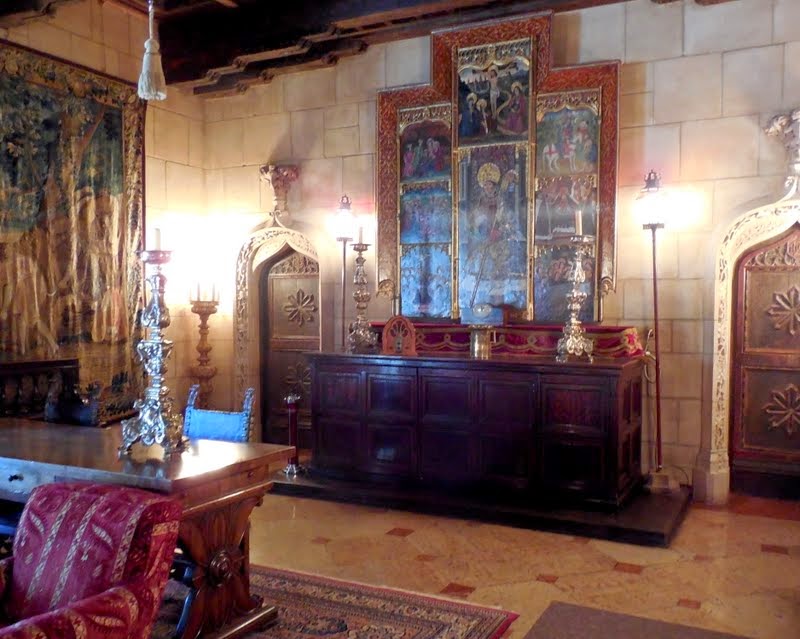 The billiard room is decorated with a 15th century Spanish ceiling. The ceiling tiles are hand painted. The tapestry is from the 1500's. 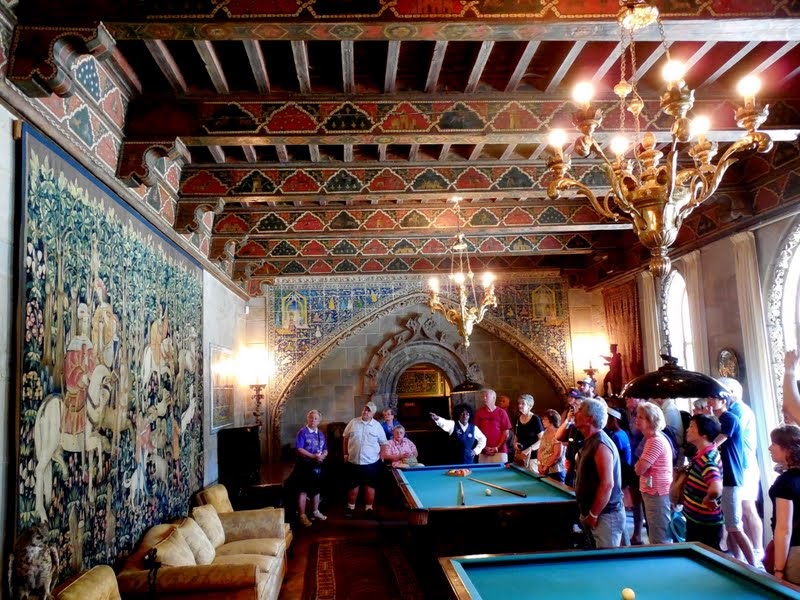 Anyone who knows us, knows Wayne and I are fans of old movies so our visit to see the Hearst Castle Theater was especially interesting. This is where W. R. Hearst and his guests gathered after dinner to watch newsreels and movies.

The theater seats are covered in soft velour with individual arm-rests and an ottoman. There were warming blankets for the guests who wanted them.  Hearst, a fan of dachshunds, had dogs available to sit in the lap of each guest while they watched movies.  At the end of their visit, the guests could take the dog home with them, if they wanted.

Tickets to Hearst Castle include visits to the pools, gardens, walkways and views of the grounds.  Once the interior tour is complete, guests are encouraged to roam around outdoors for as long as they like, taking one of the buses back to the visitors center whenever they like.

The day of our visit was unseasonably warm, but not so hot that that we didn't enjoy being in the sunshine.

I think there are four residential buildings on the grounds with a plan to have built at least six before W.R. Hearst's death.  I'm not absolutely sure which of the smaller building is which but have tried to identify them in these pictures.

The outdoor pool was designed and enlarged two times by Hearst. It is made of marble and serpentine tile and adorned with fine art.


Neptune Pool had been completely drained for plumbing maintenance and statuary work.

Construction on the Neptune pool began in 1924 and it was completed in 1936 (12 years!)  Three swimming pools were actually built here but each was "thrown out" before this one was finalized.

William Randolph Hearst reportedly told someone that these tennis courts were the "most used amusement" on the property. The courts are sunken and lighted. Wayne is standing outside and above the courts near the center.  A group of glass blocks were installed on the tennis court floor to allow better light to reach the space below.... which is the Roman Pool. 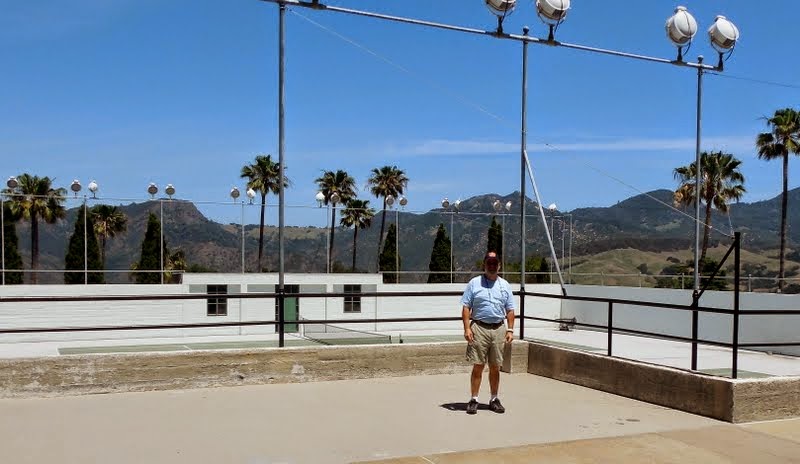 This pool was modeled after the baths of ancient Rome. It is completely tiled and is surrounded by statues of gods, goddesses and heroes. The entire facility is under the tennis courts.

The five mile ride to and from Hearst Castle is only by way of group bus. The view as you travel is narrated by Alex Trebek.  The ride takes 15 minutes each way; begins and ends at the Visitors Center, not far off California Highway 1.


All this and I didn't even cover the Hearst private airport, the zoo (world's largest private one), the working cattle ranch, wine cellars or the Hearst / Davies love affair -- all of which are included in the tour.

I wanted to remember what a $10 hot dog looks like. Room temperature, this delicacy came with "all the trimmings" --  overcooked potato chips, a dill spear and a three-day-old bun.