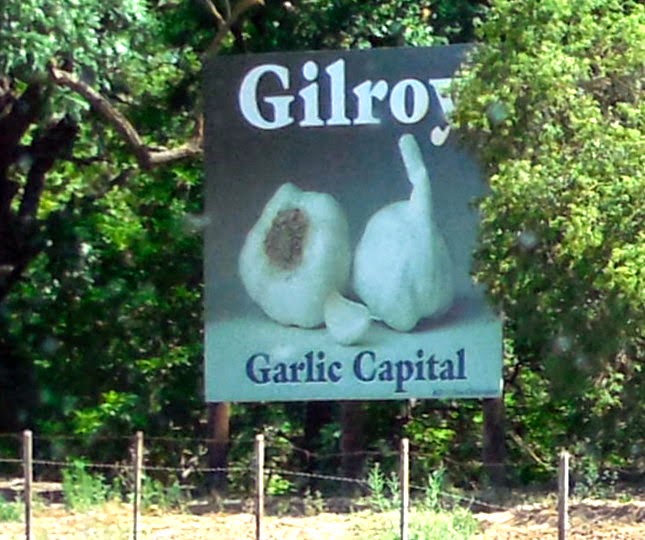 "Betabel" is the Spanish word for sugarbeet and that is the name of the campground we're calling home these days. Right smack in the heart of this California "salad bowl" there are dozens of vegetable stands along the roads. Our campground is in San Juan Bautista, California, north of Salinas, south of Gilroy (Garlic Capitol), on US 101.

Betabel RV Park is pleasant and comfortable. Our site has trees on both sides, giving shade throughout the day even though the temperatures haven't been hot enough to worry about it.

I like it here and would stay on longer except that we've already made reservations for the next stop at a campground that is reluctant to make changes.  In a few days we'll be moving along.

Day trips made for more beautiful California coastal sights of which we never tire.  Our car often takes on the look of a rolling dumpster though as we carry the dogs, coolers, bags of food, blankets, extra jackets (you never know when you'll need 'em). The rear compartment is already loaded with bicycles, a dog stroller and a dog bike cart.  Reminds me that I'll need to tackle that job later today...

Locals call this the "bay area" but it actually is the "central coast" and there are lots of sea otters, harbor seals and bottlenose dolphin here. 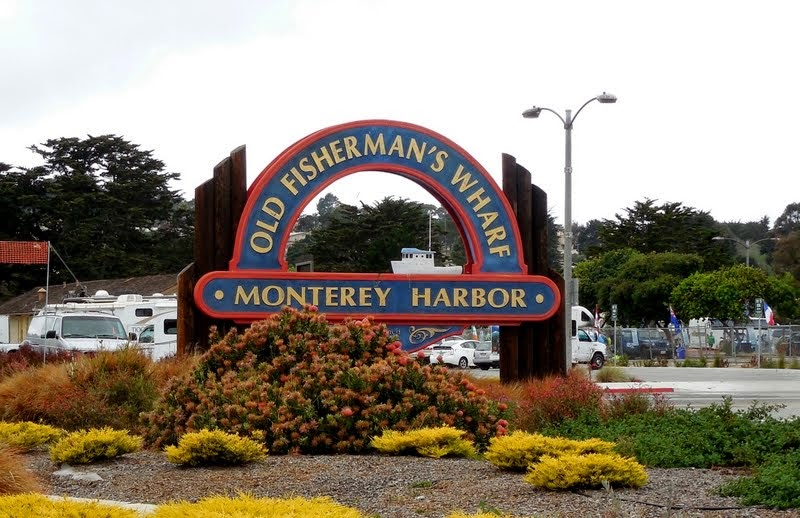 The Monterey Bay area is along the migratory path of grey and humpback whale and it's another breeding area for elephant seals, but we saw none of these mammals the day we visited.  Certainly nothing could compare to the thousands of elephant seals we'd seen at the San Simeon Rookery.

Novelist John Steinbeck drew inspiration from his life's events around Monterey's Cannery Row where the lowly sardine is honored.

We stopped for an outside patio lunch in Pacific Grove the day of our coastal tour. Wayne's fish tacos were much tastier than my fish and chips, which were, I think, Gorton's from the box with fries cooked in the same oil. Oh well, it happens sometimes.

The Monterey peninsula drive along Oceanview and Sunset Drives to Spanish Bay brought some nice scenery of rocky shoreline, wildflowers, parks and pretty skies with fog in the distance. 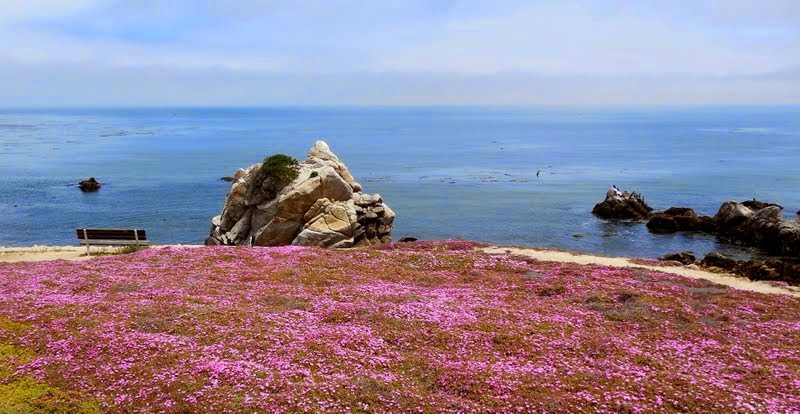 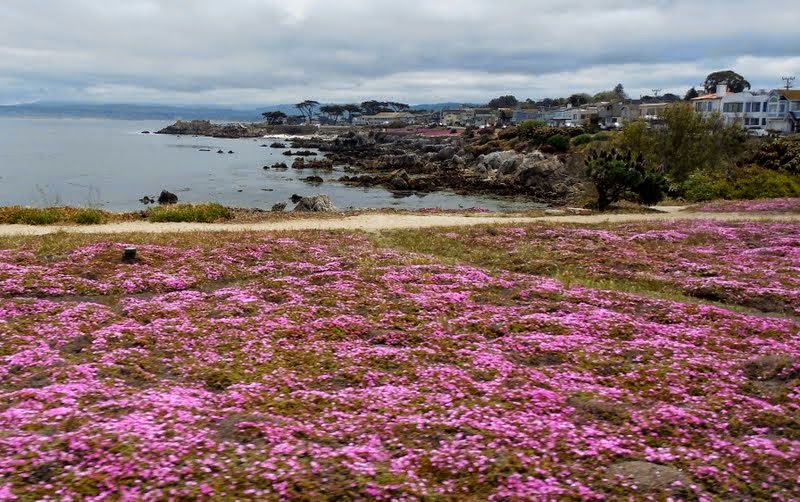 Our attempt to drive around Pebble Beach and perhaps get a glimpse of "The Lone Pine" from 17 Mile Drive was thwarted by a toll booth where we turned around instead of paying the $10 fee they collect from non-resident vehicles.  There's plenty to see without it so we moved along to Carmel.

I don't remember the name of this little Carmel area municipal park/beach but we took Lexie and Ozzie for a little walk here. Ozzie loved running in the sand, even on the leash. Lexie was afraid of the crowds of people, especially the children.


Kelp grows in abundance here, like that we saw in the water from the wharf at Morro Bay. They call it a "kelp forest".  Views from directly above down into pools like the one in the picture below clearly shows why.


Point Lobos State Reserve was on Wayne's list of places to explore but we were turned away as we had Lexie and Ozzie with us. Dogs are not allowed in this reserve...even if they stay in the car. Dad-gum-it.


The ride along Cabrillo Highway (CA 1) from Carmel all the way south to San Simeon is known as Big Sur. Local publications call it "The Greatest Meeting of Land and Sea" and I certainly agree. Here are a few pictures...

Bixby Bridge, about twelve miles south of Carmel, is one of the world's highest single-span concrete arch bridges.  It is 279 feet high and 714 feet long. Big Sur tourist information says, "Its beauty is matched only by the ocean waves crashing on the rocky coastline below". I'm sure it gets its share of photos taken too.

Point Sur is currently a Coast Guard station but for many years it served as a light station. The last lighthouse keeper family vacated the property in 1974.  A great navigational hazard, Point Sur was without a lighthouse at all until August 1889.


From what I've read, shipwrecks were uncommon at Point Sur but a few were lost there. While shipwrecks resulted in the loss of life and revenue, they were a somewhat bittersweet happening for Big Sur coastal inhabitants.  Shipwrecked cargo floated eventually to the shoreline bringing much needed supplies. Big Sur was not an easily accessible place, after all.

Perhaps the most spectacular wreck here was in February 1935. The aircraft carrying airship U.S.S. Macon crashed from wind shear in a storm. Fortunately, of the 83 persons aboard, all but two were rescued.

The day of our trip we didn't even know about the Lighthouse, Coast Guard Station or the history of this piece of land.  I looked it up online later that evening. The Point Sur website is worth checking for the details and a video.

Big Sur: The Greatest Meeting of Land and Sea

Highway 1, the Cabrillo Highway along this stretch of coast is designated an American National Scenic Byway. The Santa Lucia Mountains drop dramatically into the Pacific providing spectacular vistas.

Our ride that day took us almost 30 miles south along the coast. Then, without warning, we found ourselves deep in California Redwoods and the town of Big Sur.  Not much there... but it is truly an outdoorsman's paradise. 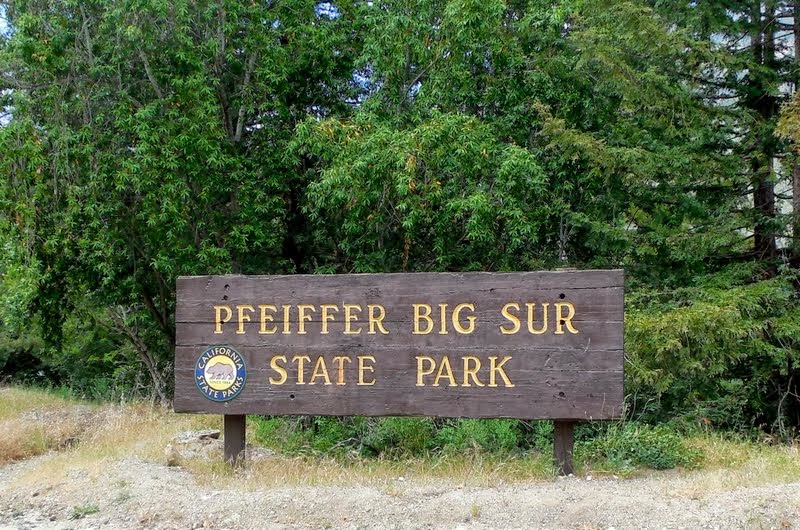 This weird looking school bus was parked at a turn-around spot just north of the town of Big Sur. The couple in the photo had also stopped here and we joked with them about which of us should buy it.

I never even asked their name but we enjoyed a nice conversation and learned they are on holiday from Cornwall in the UK. They said California's coastal weather was much like what they have at home. They are traveling south to many of the same places we've been on this trip (yes, recommended they give a stop in at Morro Bay).  Their flight back to England will leave from Las Vegas. Hope they don't pick up a flu bug there like we managed to do.

And with "goodbyes" to these anonymous new friends, we turned the car northward and headed back to the campground.

Another day we visited Santa Cruz which didn't "move" us and then the tiny town of Capitola which we did like but didn't photograph, unfortunately.
Email ThisBlogThis!Share to TwitterShare to FacebookShare to Pinterest