At Home In Pleasanton 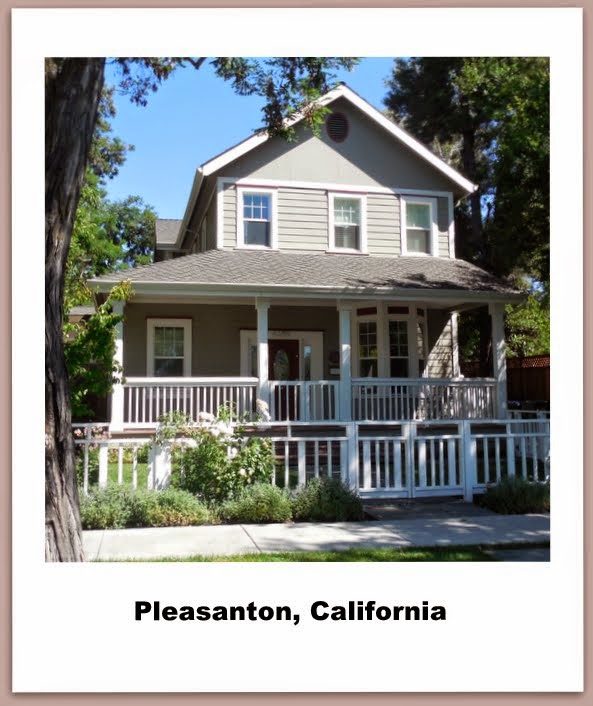 Be warned. This is a long post and with lots of pictures.

San Francisco is among Wayne's favorite cities. When we visit, we stay at the Alameda County Fairground RV Park in  in Pleasanton. It's about 25 miles east of Oakland. Pleasanton was 63rd in Money Magazine's list of Best Places to Live in 2010 and it is among the wealthiest cities. The bad news: our site is costing $50 per night instead of the $38 we paid three years ago.

We are having a difficult time staying our of "unseasonably high" weather. Afternoon temperatures here are soaring into the 90's. This will make us appreciate day trips into San Francisco's cool, breezy conditions.

The old standards and some new landmarks were on our list of stops today.

A California seismic safety project has been completed on Oakland Bay Bridge.

For the past six years, a "round-the-clock" construction project has been underway on this bridge. In Sept 2013 a new span opened to public traffic.

You can  watch the bridge's construction from start to finish in a time lapse video. It is remarkable... and beautiful.

The Ferry Building at the Port of San Francisco dates to the days of the great American Gold Rush when hundreds of ships were drawn to San Francisco Bay. When World War II began, San Francisco became a staging area for troops, supplies and equipment. Here is one of the best pictures I've ever taken of this area.

Something else we love about San Francisco is seeing the Cable Cars, Streetcars and Trolleys. For a long time I was confused as to the difference and used the names interchangeable. Here are the differentiating facts about the public transportation:

Cable cars run on steel rails with a slot between the tracks. An underground cable runs inside that slot at nine miles per hour and it pulls the cable cars. Cable cars are completely mechanical with no means of independent locomotion. In order to move forward, the underground cable is grabbed by a grip on the cable car that works like a pair of pliers.

Cable cars were invented in 1873 and built specifically to climb the hills of San Francisco. Several American cities had cable cars, but today, San Francisco's Powell-Mason, Powell-Hyde, and California Street lines are the only ones operating in the world.


Streetcars also run on steel rails, but with no slot between the tracks, and no underground cable. Streetcars are propelled by on board electric motors and require a trolley pole to draw power from an overhead wire. 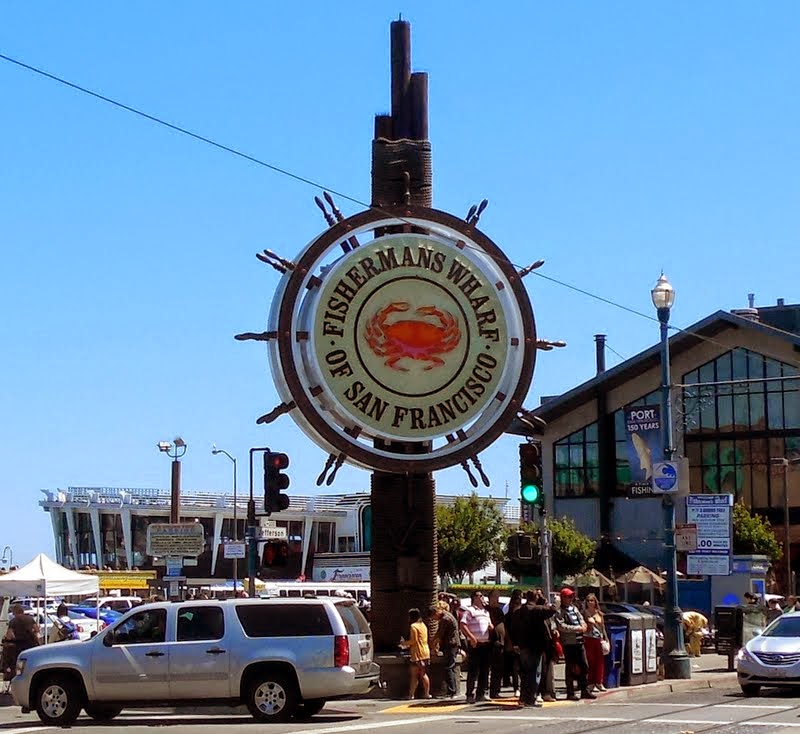 We could not visit San Francisco without spending an hour searching for a parking place and then walking all over Fishermans Wharf.


I almost always learn something new about San Francisco when we visit. This time I learned that most of the boats berthed at Fishermans Wharf belong to new generations of the same fishing families who made their livelihoods on the waters of San Francisco Bay in the very early days.


A good bit of our time today was spent around Fisherman's Wharf. We ate lunch at one of the sidewalk restaurants whose name simply escapes me now... but the food was good, if a bit pricey. I had lobster bisque while Wayne enjoyed his favorite -- an oyster poboy. 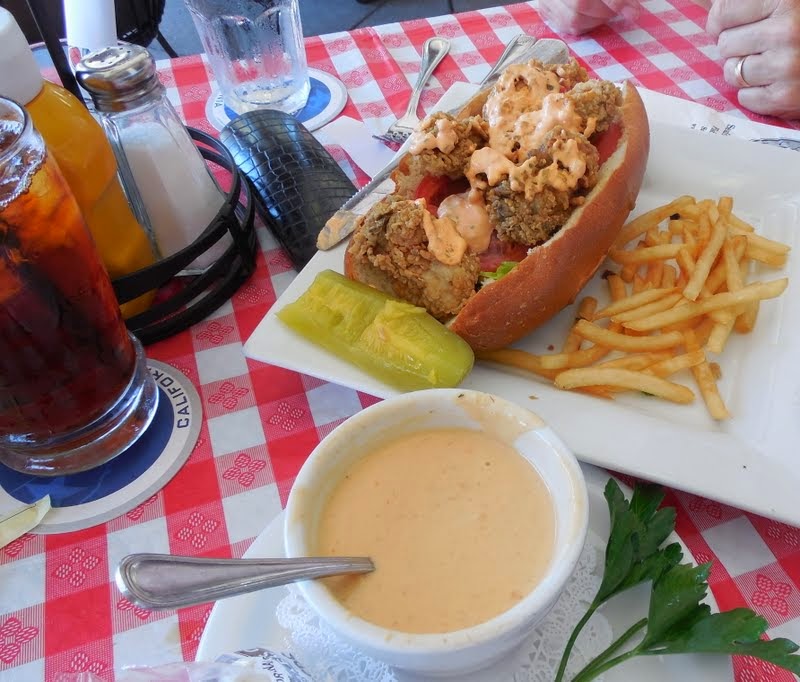 This landmark building sign is seen in many San Francisco photos. Everybody who loves chocolate knows and appreciates Ghirardelli.  History:  Domingo Ghirardelli bought this entire block in 1893 to use as headquarters of his chocolate company.  Sadly, in the 1960's the Ghirardelli Chocolate was bought by of all things... a macaroni company!  Horrors!

The Buena Vista Cafe is located on Hyde Street, across the street from the Powell-Hyde Cable Car's last stop at Fisherman's Wharf.  The cafe serves breakfast, lunch and dinner but they are famous for Irish Coffee. Wayne absolutely loves the place... and the drink.

Here's the story of Buena Vista Irish Coffee:  In 1952 the owner of the Buena Vista challenged a customer to create the "Irish Coffee" drink so well know in Ireland. The two men collaborated, experimented and did a lot of drinking but could not hit on the coffee / Irish whiskey mix they wanted. One of the major difficulties they encountered was getting the cream to stay atop the coffee. The restaurant owner even made a trip to Ireland to find an answer... to no avail.

The two men finally asked San Francisco's mayor, a dairy owner, for help and he began experimenting. It was discovered that cream, aged 48 hours, then frothed to a precise consistence, would float atop hot coffee.  Success! A six-ounce clear goblet was selected for serving the elixir and the restaurateur instructed that the Irish Whiskey be poured across a spoon as a final touch.

That is the way Buena Vista's famous Irish Coffee is made today.

Transamerica Pyramid is the tallest building in San Francisco though it isn't always clearly seen because of the city's terrain. Its construction was complete in 1972.


The fabulous Mark Hopkins, located at the crest of Nob Hill, opened in December 1926. At that time San Franciscans proclaimed it to be "architecturally perfect, flawless in its erection, comprehensive in its accommodations...strikingly representative of the best there is in modern hostelry" ---

Wayne had the good luck to have stayed in the Mark Hopkins many years ago. I've never been a guest. 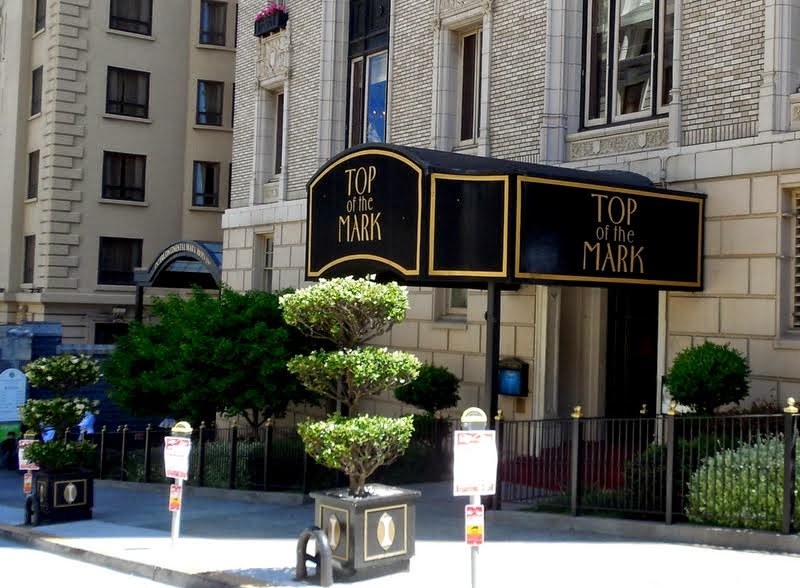 The top floor (19th) of the hotel, in 1939, was converted to a cocktail lounge and was made completely of glass. It gave patrons a 360 degree view of the city and the bay. It became known as the Top of the Mark.


During WWII the Top of the Mark was a favorite place for servicemen to enjoy a last drink before shipping out.


Another beautiful Nob Hill hotel is the Fairmont, completed just before the earthquake of 1906. While the structure held fast, it was heavily damaged inside by fire. The services of famous Hearst Castle architect Julia Morgan was retained to manage repairs to the building. It's guest list is long and impressive. 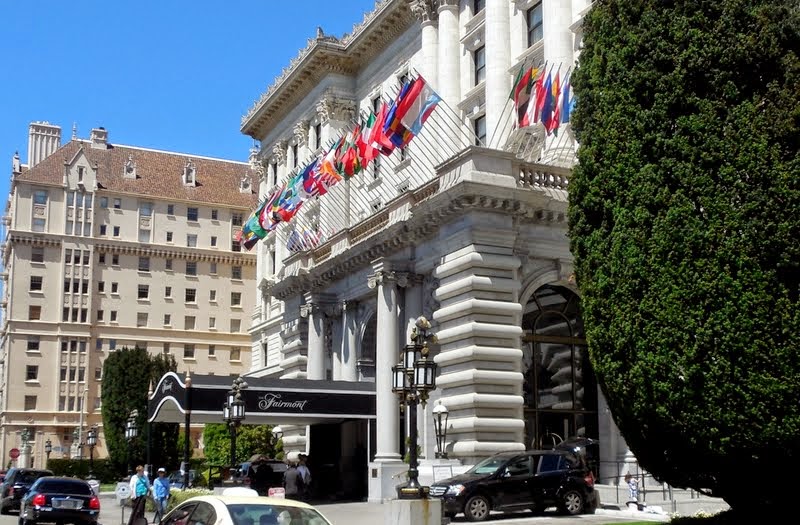 There are so many beautiful sights and views and memorable photos in and around San Francisco. 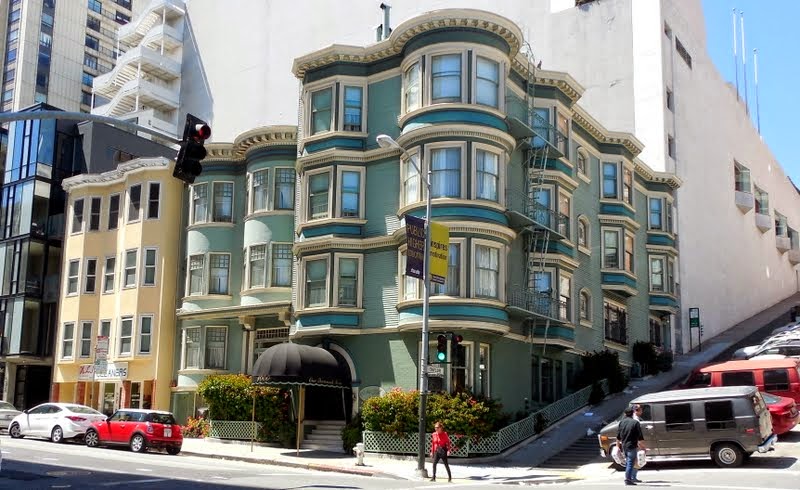 The building in the photo below is the second San Francisco City Hall. The first was destroyed in the 1906 earthquake.  It has the fifth largest dome in the world, and it stands 42' taller than the dome of the U.S. Capitol. The building's interior and exterior have been in dozens of movies.

So much is said about this bridge that I'll just post pictures and a few useless factoids...

An entire late afternoon was spent exploring the "other" side of the Golden Gate Bridge -- Sausalito and Marin County.

Another afternoon, we wiled away a couple of hours around Fort Mason and the marina. We found some interesting stuff here too. 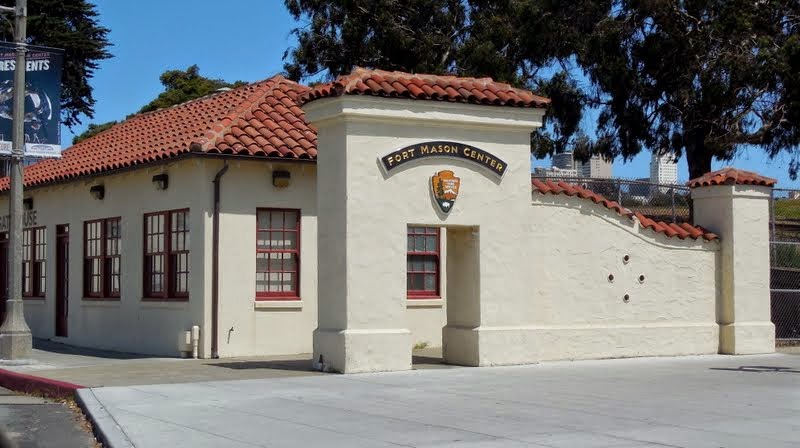 The Brigantine Galilee's stern is on display at Fort Mason.  As an island packet ship in the late 1800's, the Galilee broke records when she sailed from Tahiti to San Francisco in 19 days -- a trip that took 22.5 days on average.

In the early 1900's the Galilee charted the earth's magnetic fields. The ship's bow is on display in Benecia at a shipyard there. 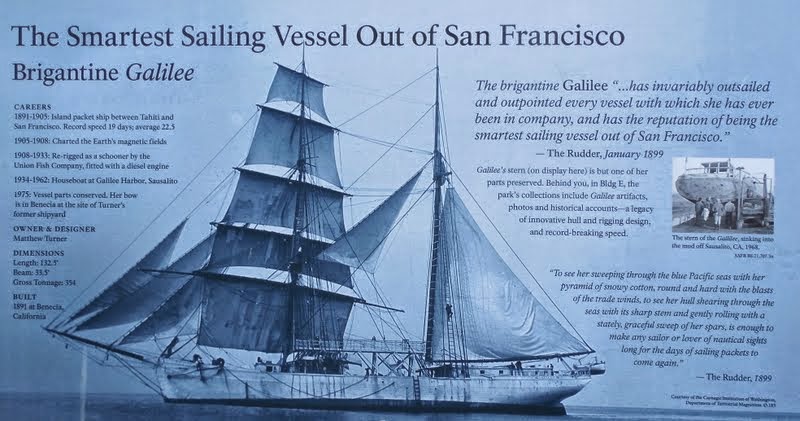 This really good view of 22 acre Alcatraz Island and the old prison there was taken from the dock of Fort Mason.  See the History Channel's video of the prison.

Another morning we took a side trip to the California University's Berkeley campus. Here's Sather Tower, built in 1914.