Devils Tower and My Close Encounter 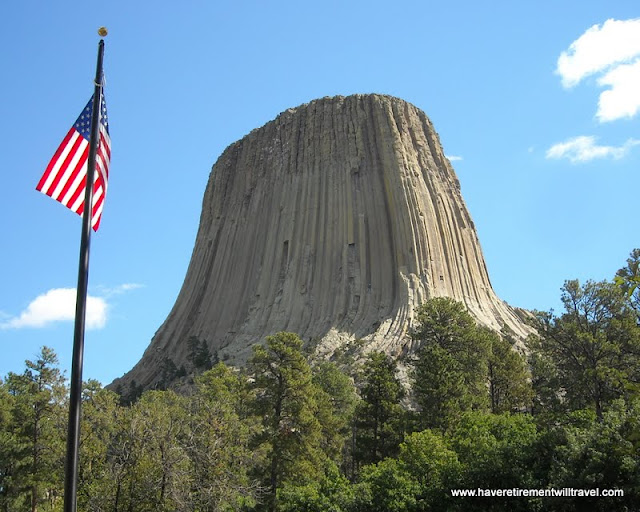 The nearly vertical monolith stands a mere 1,267 feet but sitting at an elevation of 4,250, the top reaches to some 5,000  feet above sea level. It's impressive chunk of rock.

Part of the Black Hills, the 1,347 acre Devils Tower park is covered with pine forests and prairie grasslands.

While we're at Sundance, Wyoming, we'll take in a visit to Devils Tower.


Our first glimpses of it were breathtaking and we stopped at every pullout to snap pictures. 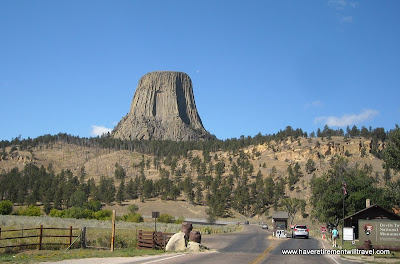 On behalf of Lt. Col. G.A. Custer, Col. Richard Dodge named Devils Tower when he led a military expedition to confirm reports of gold being discovered in the area. 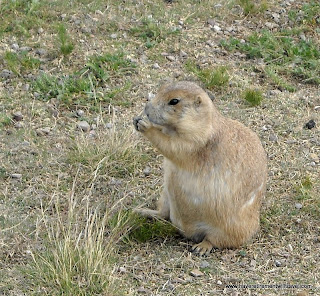 Prairie Dog Town is a large "field" (to a southerner) brimming with these little critters,  easily numbering in the thousands....

The prairie dogs are so accustomed to seeing people that they know no fear. Some of them came right up to us looking for a handout.

Feeding the prairie dogs is discouraged over and over again on the signs. We complied, of course. 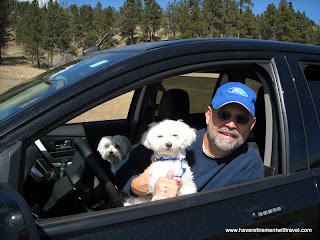 Wayne really loves to see (and hear) Ozzie's reaction to other animals.  Recently, he learned that Ozzie (and Lexie) do not like horses when we were in a campground with a few horses in a nearby corral.

Ozzie watched the prairie dogs but didn't bark at them. Lexie paid no attention whatsoever.

Once Wayne and Ozzie were sufficiently satisfied looking at the prairie dogs, we drove on to Devils Tower.

Stephen Spielberg's 1977 movie, Close Encounters, referenced Devils Tower as the shape inspiration for Richard Dryfuses' character's encounter with aliens.  While visiting here, I had my own "close encounter" that nearly ended in disaster ... or so it seemed.
My Close Encounter - It started innocently enough, but quickly went wrong. Wanting to walk a few hundred yards on the path that circumnavigates Devils Tower, I set out on a short hike right after lunch, promising Wayne that I'd be back in less than 30 minutes.

I intended to walk just a portion of the 1.3 mile Tower Trail that goes around the base of Devils Tower.  Unknowingly, I was on the much longer Red Beds Trail. I didn't know it... not for awhile.  The trail began as a wide path among the trees.  The walk was serene and pleasant so I went a bit farther than originally planned, checking my watch every few minutes to be sure I wouldn't be gone too long. I stopped to take pictures. 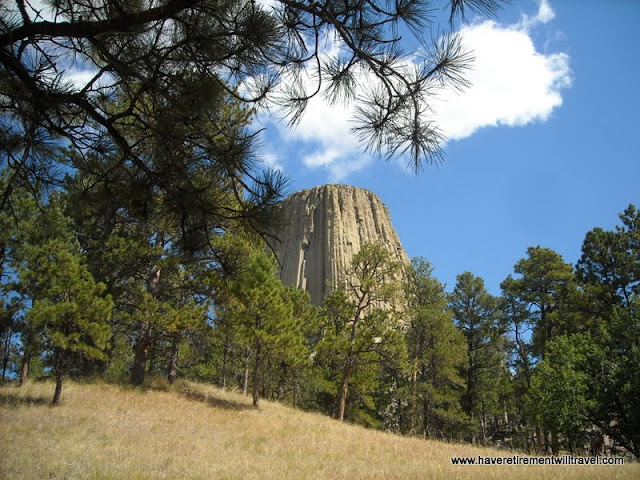 A few minutes into my "walk," I met a couple, about my age, who said the red rocks overlooking the Belle Fourche River and a beautiful green pasture was ahead of me.  Knowing I was already approaching my time limit, I dared to walk on, taking more pictures. 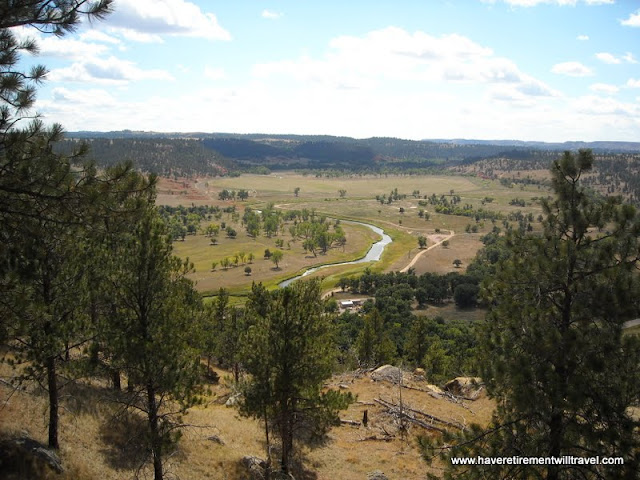 A bit farther I came upon another couple who said the hike ahead of me was easy and said it wasn't far to the red rocks. I kept going....  already having walked well into a half hour. I feared Wayne would be worried about me but I still had plenty of energy.

I kept going, walking faster and taking pictures -- even propping the camera up to take a picture of myself under a giant, curving rock.


I convinced myself to keep up the fast pace and keep going -- all the time hating myself for causing Wayne to worry.  By now I figured I was about half way and wouldn't be any better off to turn back than to go forward. The walk continued.


The red rocks were at  the lowest elevation of this hike and I was tired. Real concern began to set in as, by now, I have walked almost an hour and I don't know how far I've come or how much farther it is to finish the walk.

Along about now, I'm not liking Devils Tower too much.  The path is narrow and uphill. I had to keep walking and my fast pace caused me to pant for breath.  The half bottle of water I brought is but about two ounces now and my mouth was dry from heavy breathing. 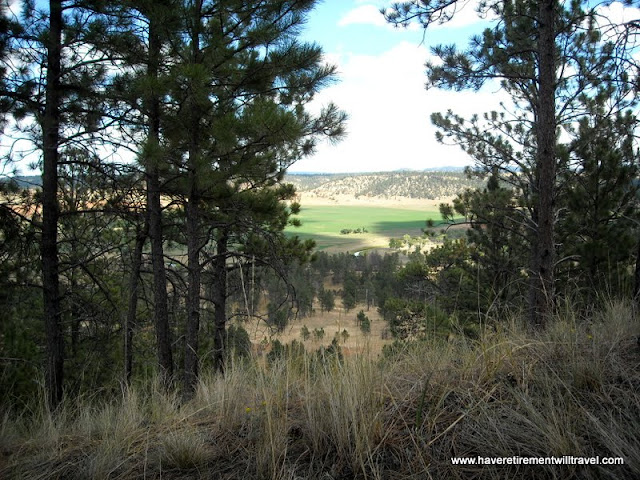 ﻿
This would be the last photo today except the one I took of my wristwatch so "they" would know I was still alive at that time it was taken. I finally gave in and stopped to rest. Somewhere beyond here I also stopped the relentless uphill pace that had my heart pounding so hard I could hear it ringing in my ears.

The terrain leveled off during last 20 minutes of my "walk from hell" and I finally made it back to the car where Wayne was waiting.  I apologized with all the breath I could muster and collapsed into the car seat.

My wonderful husband had not become overly concerned at my long absence. He had been watching climbers on Devils Tower and playing with the dogs. He knows me better than I know myself.  What a great guy.

I don't know how long I walked or the exact distance. I don't think it was really very far or for a very long time but I cast aside my better judgement and was reckless with Wayne's feelings. He forgives me. I promised never to do that again.