Wayne and I enjoy touring with Landon, Marcella and BJ so, even though we had been in Custer for almost a week, we waited to take in the touring attractions until our friends could be here with us.

On this morning, Marcella, Landon and BJ, in their Jeep, along with Wayne, Lexie, Ozzie and I, in our car, took a day driving trip into Custer State Park.  There are more than 71,000 acres inside Custer State Park -- we'll cover just a fraction of that in our visit today.  Our park fee covers us for seven days and that's a good thing as the park could never be seen in a single day visit.

Our first stop today would be at Mount Coolidge Lookout and Fire Tower atop a 6,023 foot peek.  It is used for communications and fire spotting.  A two-mile upward, narrow, winding gravel road offered a small challenge for our Ford Edge and was completely insignificant for Marcella and Landon in Rubi.
While at Mt Coolidge, Wayne discovered someone looking back at him through his binoculars.  Surprisingly, it was ole Crazy Horse -- some 20 miles away.  I zoomed in with my new camera, perched on the tripod, to see if I could get a decent shot.  This one was the best as the sun broke through at just the right time to shine on the stone carving.

Leaving Mt. Coolidge, we resumed the ride along the 18 mile Wildlife Loop. We drove through the grasslands and pine-speckled hills hoping to catch just a glimpse of the park wildlife. This might include bison, mountain goat, pronghorn, whitetail and mule deer, elk, bighorn sheep, coyotes, burros, prairie dogs, eagles and hawks. At this time we wouldn't have any way of knowing we'd get to see nearly all those animals today.

We were told a large group of buffalo might be seen in the southernmost area of the park as several hundred had already been herded into that area in advance of the Annual Buffalo Roundup. We took the road suggested and saw but a single bull resting in a field. 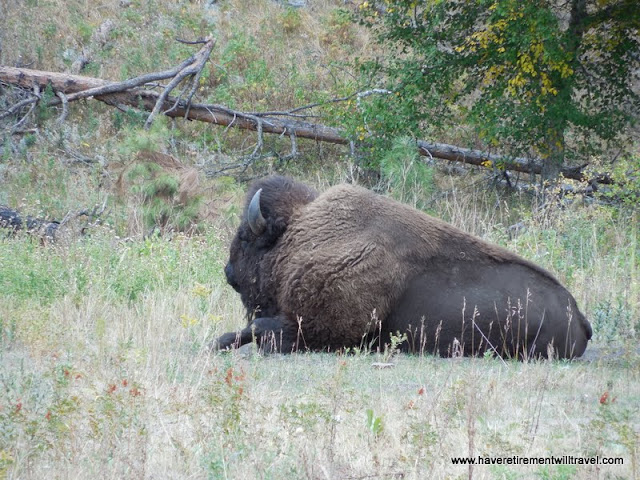 We drove on without seeing another buffalo although the road was heavy with dung.  The ride was interrupted by traffic congestion caused by a large group of burros who seemed to think they were operating a toll booth -- challenging each vehicle that approached -- almost as though they were daring each one to run the gauntlet.  These burros are beggars!   Here's a slideshow of just a few of the toll takers.


The burros here are not native to the Black Hills. They are descendants from the herd that, at one time, carried visitors in the park. Burro rides were stopped many years ago and the burros were released to live a life of leisure in the Custer State Park. They are now a major visitor attraction and they seem to know it.  Many people bring goodies (carrots, apples, crackers, etc.) to feed the burros from their car window.  Our visitors guide warns of the risk of feeding them, but frankly, if I'd had a carrot or apple in the car....

Then we saw them.  A great herd of buffalo.  Black dots all over the rolling golden prairie in the distance.  Hundreds, maybe a thousand, buffalo.

From where we were visiting the burro, we inched the cars onto the Red Valley Road, leaving the begging burros to others.  The herd of buffalo were within a hundred yards of the road edge so we got out to snap of few pictures.


The Red Valley Road intrigued us so after a few minutes (and another dozen photos), we drove on.


The ride took us out of Custer State Park and into adjoining Wind Cave National Park where we caught a glimpse of a coyote scurrying up a hill and a group of four mule deer who stared us down -- but never moved from where they stood.  They were at least 200 yards off the road.  I didn't get a photo of the mule deer or the coyote but Wayne got a good look through his trusty binoculars.
We eventually turned around and returned back down Red Valley Road this time finding the buffalo much closer to the road's edge where we were able to see these hefty guys up close. 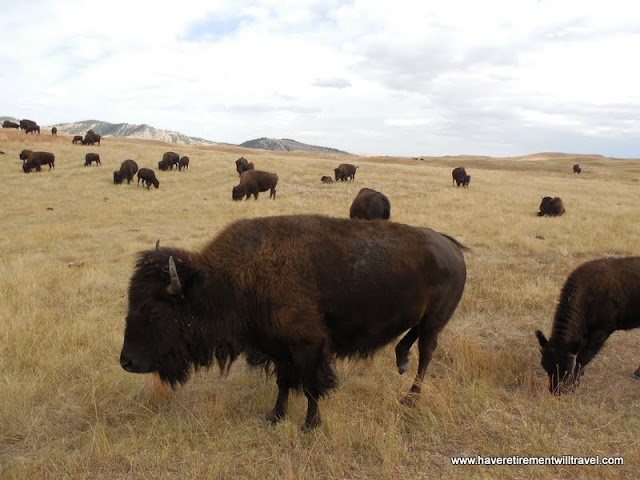 Custer State Park is home to as many as 11,300 head of North American bison, more commonly known as buffalo. These fellows can grow to 6 feet tall and weight more than 2,000 pounds. 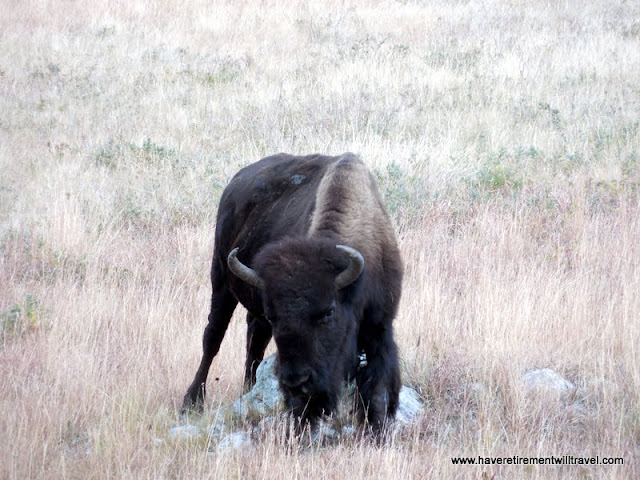 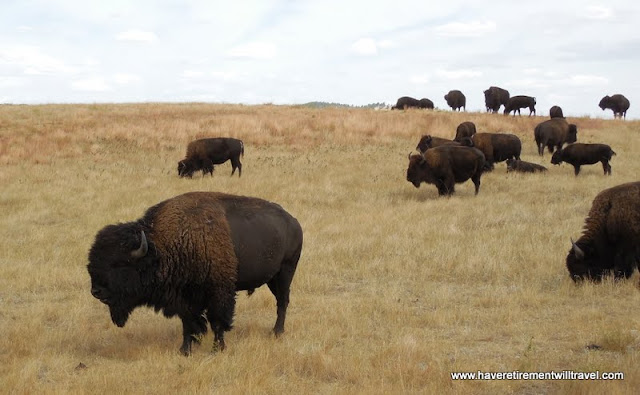 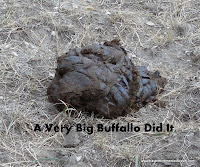 To keep the park's rangeland plentiful, the bison herd numbers are lowered each year during the annual buffalo roundup.  The animals are corralled, veted, numbered, branded and some are sold before releasing them back into the grasslands. Spring birthing season rejuvenates the herd size to 1,300 again.
More than 15,000 people are expected to come to the park next week to witness the buffalo roundup.
As usual, our day trip that was expected to take about an hour, was taking most of an afternoon.  There is always so much to see and we stop every few minutes to look, photograph, walk dogs, eat and generally just chat.   But we did finally complete the Wildlife Loop and were fortunate enough to see some of all the wildlife the park has to offer except the illusive mountain lion and mountain goats. Not too bad for a half-days work.

South Dakota's original bighorn sheep was the Audubon subspecies but it became extinct in 1922. A herd of Rocky Mountain bighorn was introduced to Custer State Park -- these are their descendants.


At the end of today's excursion, we opted to ride back into town (Custer) for a bite of early supper.  I decided to snap this picture of the "Welcome to Custer" sign.  This is a great little town -- heck, all of what I've seen in South Dakota has been great.  I think we'll just become residents of this fair state. 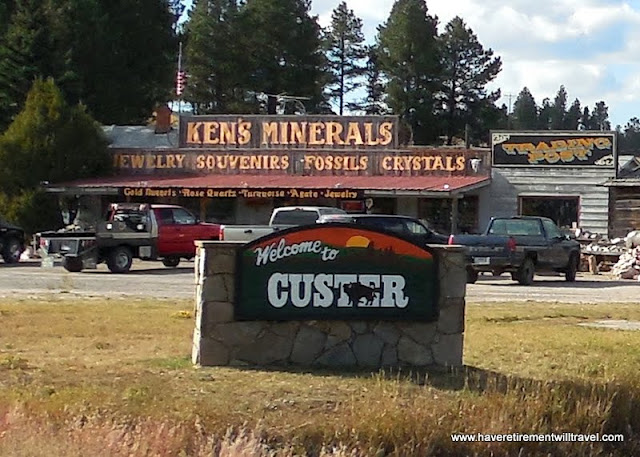 Our restaurant selection was one of our campground host's favorites. Jerry recommended it the day we arrived.  It's Buglin' Bull and it has a nice atmosphere.
There's certainly more to see in Custer State Park -- the Needles Highway, Iron Mountain Road and just outside the park, there's Mount Rushmore -- certainly not to be missed.   Join us for the next outing... we'd love having you along.
﻿
Email ThisBlogThis!Share to TwitterShare to FacebookShare to Pinterest