Monroe called to tell us he had some old pictures to show us so we took another drive over to Eclectic.  We met his lovely wife, who made us feel right at home and we ended up staying for several hours and learning just what an interesting life they have had.  And both are still going strong! He even rides a motorscooter!

To our surprise he had several pictures of Wayne's Mom and one studio photograph of her that we'd never seen.  It would have been taken when she was about 16. It was the picture of her that Monroe had with him while he was serving in WWII.

Monroe also told us about a "real life" event that occured in the home at 180 Main Street (the home of the wedding) in which a robber was shot and killed by the resident, a banker, who was being held hostage during a bank robbery. 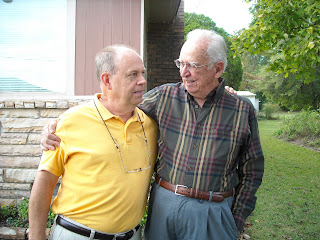 We finally left Eclectic around 4:30 with a stack of pictures and writings Monroe had given us.  It was a very good thing to get to visit someone who knew family members.

On the way out of town, I snapped a photograph of this huge metal pig that's mounted outside a barbque restaurant.  I think the restaurant was out of business, but I just couldn't get over this huge pig who had to be at least 30' tall... 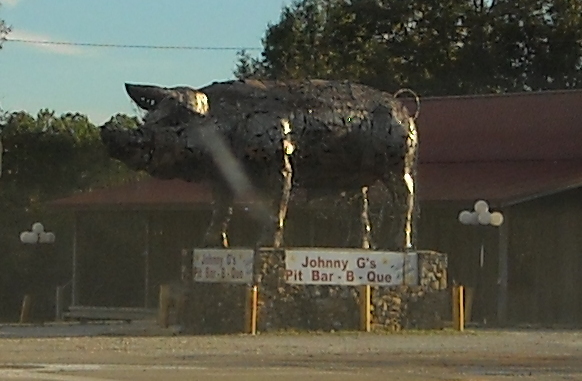