We left Nashville on Wednesday and spent the night in Calera at SunCoast RV, made our way south from there and arrived in Auburn by 2 p.m. where we set up camp in the usual place at the Fish Biodiversity Lab field.  The spot was not a good one as afternoon sunlight came in on the television set. Saturday's game against Arkansas was to be at 2:30 so it would be difficult to see it on our set. Fortunately we met a nearby group who invited us to join them for game watching. 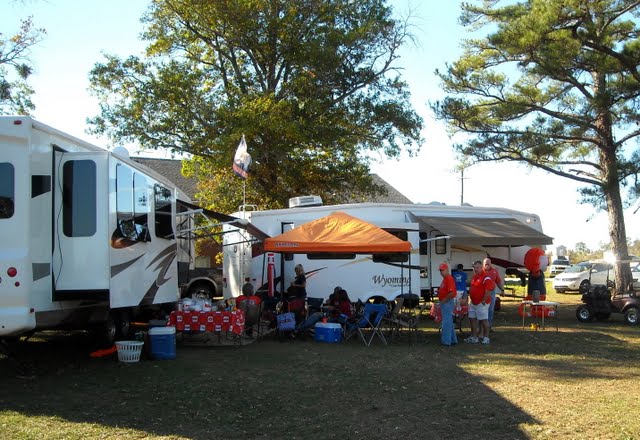 Several years ago we gave up most stadium game watching as we don't like being in crowds.  Day games are either too hot or cold and night games make us stay up too late getting back from the stadium.

On Saturday, as planned for several months, my dear highschool friend, Marilyn and her husband, Gene, joined us for gameday.  They rode the shuttle from near the tailgating field to the stadium. I think they had a good time.
﻿﻿ ﻿﻿﻿ ﻿
Email ThisBlogThis!Share to TwitterShare to FacebookShare to Pinterest