The Many Attractions of Colbert County, Alabama

From Heritage Acres RV Park, Tuscumbia, Alabama     With almost five weeks until our Gulf Shores rendezvous, we had time to kill after saying goodbye to Gary and Shelia, their children and grandchildren and Sue and Ricky on Saturday. We left Pin Oak Campground on Sunday morning. We gave some thought to stopping around Pickwick Landing for a few days but with the bitter taste of being without internet still fresh in our mouths, we opted to keep going until we could be sure we'd get a strong cell and internet signal.

I convinced Wayne to go to the Shoals area of North Alabama to visit the home of Helen Keller.  I had never been there even though I grew up in nearby Huntsville. I called Heritage Acres RV Park in Tuscumbia to be sure they had a place to accommodate our big rig. They did and we reserved two nights. The park was not much more than a gravel parking lot filled with year-round working age campers who appeared to live there. We settled in and shook a bit of the Natchez Trace dust off the step covers the first afternoon. I spent some time that night researching area attractions and selecting the ones I wanted to see and then putting them in a kind of priority list.

Early the next morning we were up and rolling. Last week's warm, sunny days have succumbed to overcast skies and much cooler temperatures. That's a good thing as we will take Lexie and Ozzie for this super full day of touristy trivia.

Our first destination is Ivy Green, the birthplace home of Helen Keller. I remember my sixth grade teacher's lesson about Helen's difficult early youth, circumstances surrounding "the miracle" itself and the important contributions Helen would go on to make in the lives of so many. The 1962 movie, "The Miracle Worker" reinforced and brought visual importance to what I already had learned about this great Alabama woman.

There were no other visitors to Ivy Green while we were there and we enjoyed the guided tour. Almost all the furnishings in the home are those used when Helen and her family lived there, including the locking sugar chest, dining table set, silver service and the dishes on the table.

The room in the picture below was never actually Helen Keller's bedroom but that of her grandparents and later her parents. Most of the personal items, the dresses, rug and quilt were Helen's.

Just the main house is included in the guided tour -- the smaller house, kitchen and cooks quarters, grounds and other outside buildings are seen at one's own pace.

The next two pictures are of Ivy Green Cottage, built in the yard near the main house by Helen's grandfather for Helen's mother and father as a bridal cottage. Helen was born here on June 27, 1880.

Either the room in the picture above or the one below is the room where Helen was born. At the time of her birth, her grandparents occupied the main home while Helen's family lived in this small two room cottage.

The building behind where Wayne is standing is kitchen and cook's quarters. It was not uncommon to live like this in the south where cooking went on all day, starting in the early morning and lasting into the evening. Meals were prepared here and brought into the main house for serving.


The picture below is of the actual well pump where Anne Sullivan first made communication with Helen when she was six years old. Miss Sullivan pumped water across one of Helen's hands while spelling W-A-T-E-R into the palm of her other hand.  This became known as "The Miracle" and by the end of that day, Helen had learned seven words.

Ivy Green isn't the only attraction in this area. There are so many significant things to see in the connecting towns of Muscle Shoals, Florence, Tuscumbia and Sheffield, in fact, that we would have to hurry to get through my short list in the one day we have planned.

Cypress Moon Productions Production company and recording studio is housed in this former Naval Reserve building along the banks of the Tennessee River in Sheffield. This is the old Muscle Shoals Sound Group. The building was deserted and the doors locked the day we drove by but tours can be scheduled. 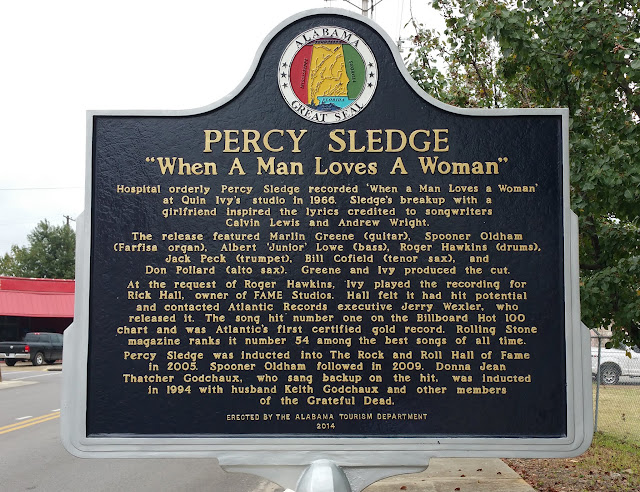 The Muscle Shoals Sound Studio Museum (photo below) was closed and in process of renovation. It is one of the most photographed locations in the area. The Rolling Stones, Cher, Bob Segar, Rod Stewart, Paul Simon, Art Garfunkle and others recorded some of the most popular American hits of the 1970's in this building. 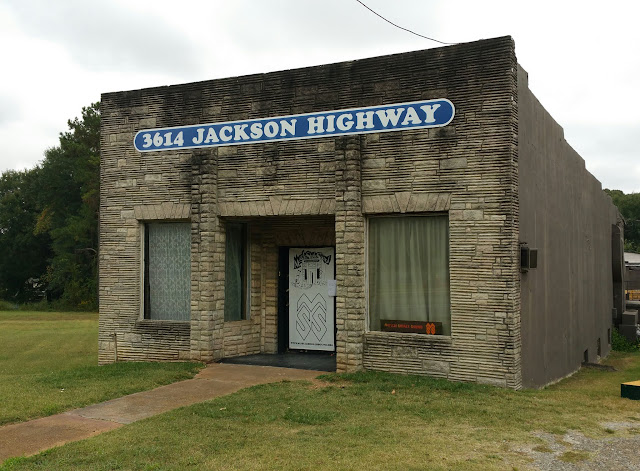 The session musicians who played backup music here were dubbed "The Swampers"  and referenced in the lyrics of Lynrd Skynrd's  hit song "Sweet Home Alabama". 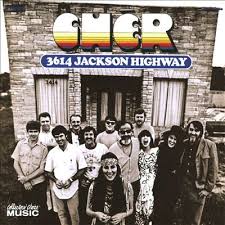 Pop artists Liza Minelli, Tom Jones, Little Richard and the Osmonds recorded here along with country music legends Mac Davis and Jerry Reid.
All these sights and history are just part of the story here. Wilson Lock and Dam, with one of the highest single-lift locks in the world is here. It dates back to WWI.  Other noteworthy sights include the Alabama Music Hall of Fame, beautiful Spring Park with it's famous Light and Water Show is free to the public, blues legend W.C. Handy's birthplace home and museum, a Frank Lloyd Wright designed house, silent movie landmark, The Ritz Theatre, Belle Mont Mansion, the tiny old Coldwater Stagecoach Stop, Tuscumbia's Railway Depot and so much more.  All these things we passed up though as we had one last important stop.... a dog cemetery.

Key Underwood Coon Dog Cemetery at Cherokee is "the final resting place for more than 300 of man's best friend" according to the Colbert County tourism brochure. Located deep in an area known as Freedom Hills, a fellow buried his faithful coon dog, Troop, back in 1937.  The rest is history. A "coon hound only" cemetery, headstones bear names like Patches, Preacher, Flop, Bean Blossom Bommer and Tex. Our friends, Marcella and Landon, told us about their visit a few years ago. I had to see it and to let Ozzie and Lexie wander among the small graves, rock and wood headstones and artificial flowers. 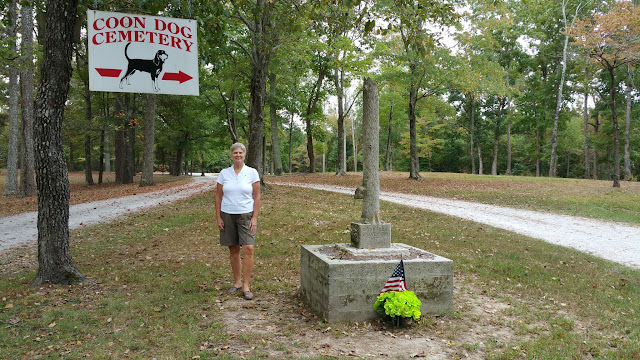 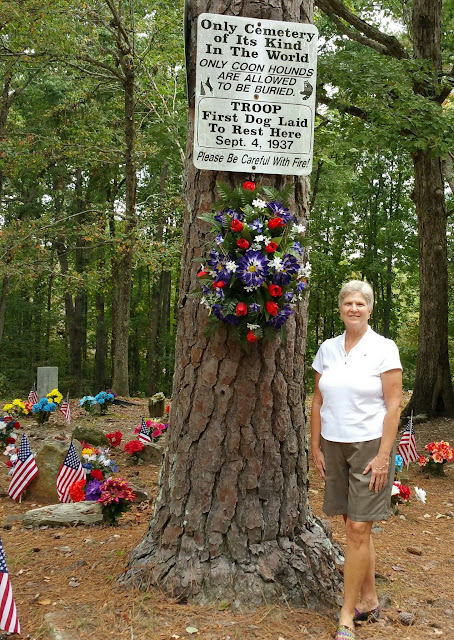 On our ride back to Tuscumbia from the coon dog cemetery, we happened upon a sign for the Rattlesnake Saloon that we had heard about from friends. The quick and dirty history of Rattlesnake Saloon is that a couple of guys wanted to add a saloon to an already built "lodge" on an old family farm, so in 2009, they built a lean-to shanty in the side of a hill. It took 49 days to construct and has been featured in magazines and music videos according the advertisement.

As luck would have it Rattlesnake Saloon was closed (our visit was on a Monday) so we have nothing to show for our visit.  Oh well.... maybe next time.
Email ThisBlogThis!Share to TwitterShare to FacebookShare to Pinterest