From Natchez Trace State Park, Pin Oak Campground, Lexington, Tennessee       We've zigzagged all across Tennessee this summer and we're not stopping now -- traveling from east to west Tennessee this time. Our destination is Pin Oak Campground in Tennessee's Natchez Trace State Park where we will join Wayne's brother, Gary, his wife, Shelia, friends Sue and Rick, children Mindy and Kelly, their husbands and children for family camping. This is almost the same crowd we camped with at Montgomery Bell State Park campground in late April and we look forward to it all.

The campsite we reserved was near Gary and Shelia and had nice afternoon shade but those shading trees also blocked our satellite view. With Auburn playing LSU Saturday evening, it's critical to have access to television. We relocated where we won't be close to the others at all but we do have certain priorities.....

Both Wayne and I have been looking forward to playing golf with Gary since before our April visit when he and I both came down with head colds and didn't get to play. On Friday, four of us found our way to private Pine Tree Country Club in nearby Lexington that allows out of town visitors to play. This would be our first of several rounds at this nice, friendly course. 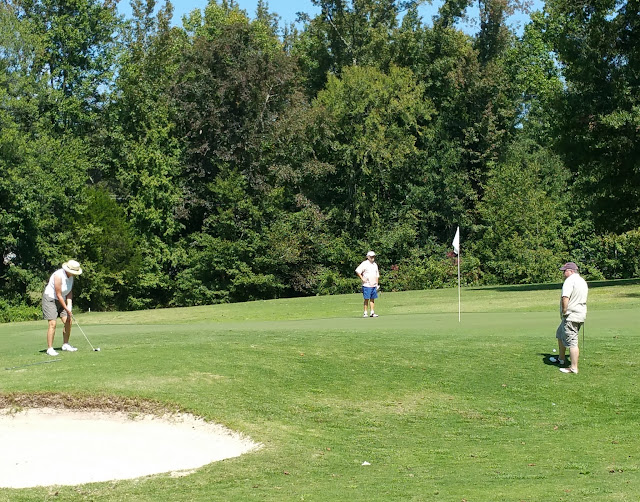 Gary's grandson, Grant, was our fourth. Because he didn't play golf, photography duties fell to Grant. Many thanks to him for making these golf day memories for us.

By the end of the day, Grant was hooked on golf. He will retrieve his dad's unused clubs when they go home Sunday and we will all play again next week. 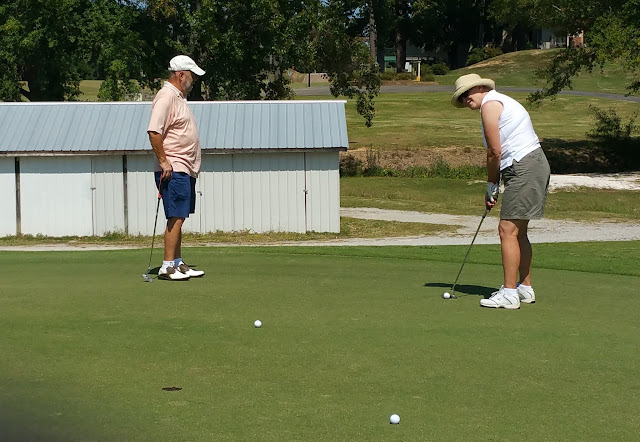 Wayne's golf game is improving but I still hit twice for every hit the guys make. Even starting from the Ladies Tees, I'm the drag on the group. Doesn't matter, I never get discouraged and continue to love playing. I just hope everyone doesn't get tired of waiting for me to hit.... and hit... and hit.

On Saturday, an afternoon hamburger cookout preceded the Auburn v. LSU football game. Our site had late afternoon shade but the sun beat down hot on us until well after halftime. Shelia brought along her snow cone machine and it was a hit as I watched the making of two dozen snow cones before I stopped counting.

Despite the preseason rankings, Auburn is not playing well this year. In the end, LSU was just too good and Auburn suffered the loss but it didn't dampen our family camping spirit.

Gary, Grant, Wayne and I returned to Pine Tree Country Club again Monday and on the way, stopped in at The Lunch Box, a downtown Lexington, Tennessee eatery. I forgot the names of the sandwiches we ordered but I remember that everything was deeee-luscious!

It's been a really long time since Wayne and Gary have enjoyed this much time together on the golf course and I could tell Wayne was loving it. The weather was nice, a bit warmer than I would have liked, but cooler than it could have been.

Gary spent the morning reviewing the basics of golf with Grant. Now it's time to put it all together....


I feared Grant would become frustrated with golf but we all reassured him that he wouldn't regret taking up the sport. He has such a wonderfully positive outlook. I've heard since that he is practicing every day and that Gary is taking him to the driving range on occasion. 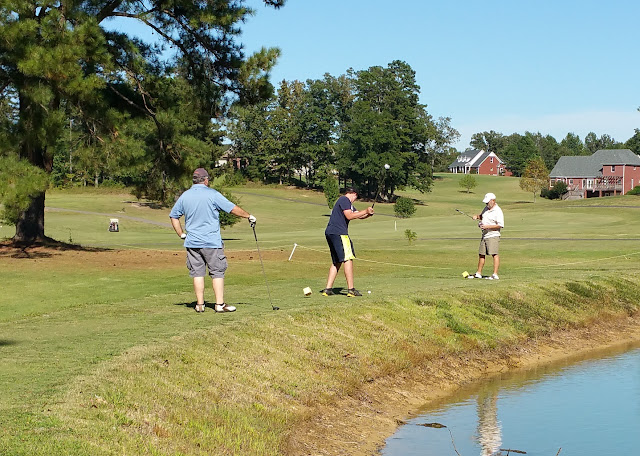 We returned to Pine Tree for a third and final round of golf later in the week. Grant and his family had long left the campground but we were joined by a new forth, Gary's friend, Rick.  I don't know if I made much progress in these three rounds, but I sure had a good time.

Shelia and Sue brought sewing materials, machines and ideas to the campground and were busy making Christmas gifts while we played golf. Here's proof. 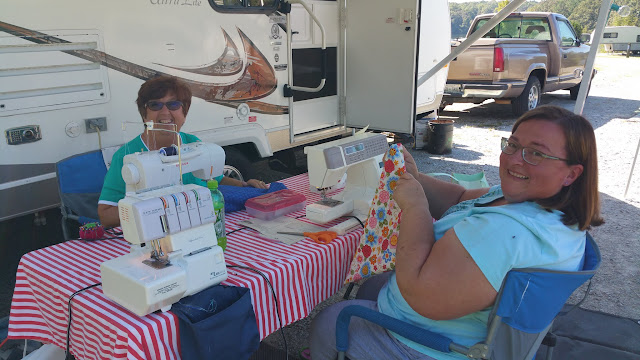 Last and yes, least.  It's been awhile since I posted pictures of Lexie and Ozzie so I snapped these to share...


Family vacation has been such a good thing. We're looking forward to the next time.....
Email ThisBlogThis!Share to TwitterShare to FacebookShare to Pinterest