We described the problem and the tech suspected a minor adjustment to the roller might do the trick. Yay!

But it was not what Dan, our tech, first thought. Oh no, it was worse -- naturally. Murphy's Law you know.

Fortunately, there were two options for a fix -- one complex and labor intensive that required removal of the entire bedroom slide, fix the roller and refitting the slide with 20+ hours labor. Our second option was to fix the roller, repair the damage to the slide bottom, mount metal slats to it with 8 hours labor. Guess which we chose.

Dan would do the repair Monday so we parked in one of the service campsites and had the weekend to knock around Knoxville. I sent a text to Sandy and Dave, who were still in Franklin, to tell them again how much we enjoyed our visit in Waynesville and to let them know of our decision to leave early for the repair. To my surprise, Sandy replied that they too, were headed to Buddy Gregg and would arrive Sunday. O happy day! We made a plan to meet them at Buffalo Wild Wings for Sunday afternoon football.


Sandy and Dave are having a satellite mounted to their new coach and they've discovered a leak to be repaired so they will be on a day or so after we leave. We enjoyed visiting with them again Monday morning. We also spent time browsing the new coach inventory at Buddy Gregg.  No "new coach" fever for us though.

We did a short downtown Knoxville visit Monday afternoon. Some of the highlights....

One of Knoxville's most ornate public places, the L&N Terminal building had stained glass and tile laid in designs of Oriental carpet patterns. It was built in 1905 and cost $107,000 to build. It's opening coincided with the opening of the rail line from Louisville and Cincinnati to Atlanta. The L&N Building had a prominent role in a Pulitzer prize winning novel, A Death In The Family, set in 1915. This and other Knoxville "walking tour" buildings are described at this Knoxville Heritage site. 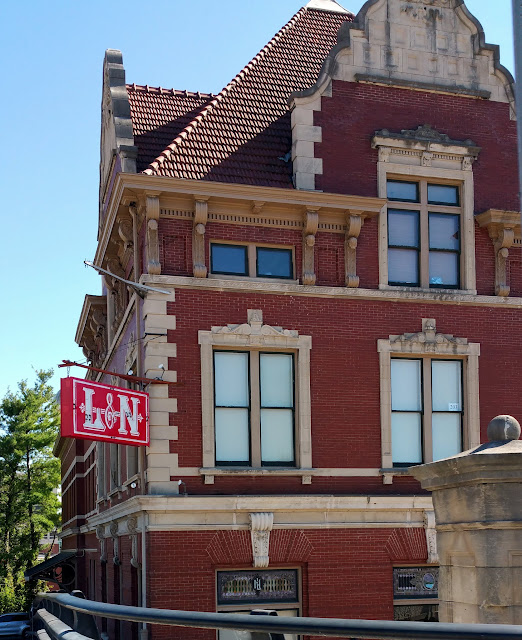 The gold colored tower in the next picture is Knoxville's Sunsphere, constructed for the 1982 World's Fair. It became the official symbol of the fair but fell on hard times after the thrill of the Fair. The Sunsphere is one of just two remnants of the entire event. The Sunsphere has closed and reopened for the public a few times. Details of it's history are at the World's Fair Park website.

The brick and blue glass building in the next picture has little significance to anyone, I'm sure, except Wayne. It was here, in 1965, that he had his physical examination for entry into military service. It was not a University of Tennessee property at that time, of course. 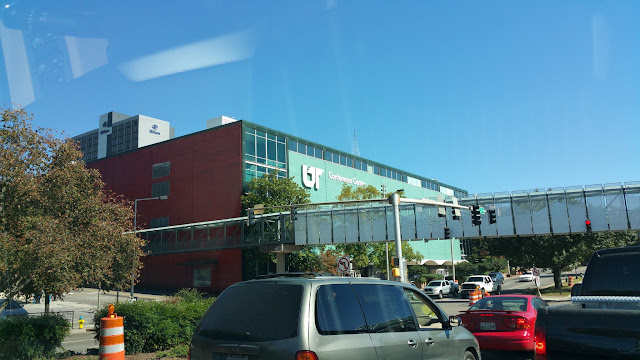 It took all day but our slide repair was finished at the day's end, just as Dan said it would be. The repair bill was just under $1200 and was mostly labor costs.  I can't say enough about the quality of Dan's service on this job. Always eager to explain what he was doing, Dan was also willing to hear our questions and answer them. He took dozens of pictures of the process and eagerly shared them with me.

Tuesday morning before we left, Dan returned to check on the slide operation. Several weeks later, I received a text asking if it was working to our satisfaction.  That's customer service!

In preparation to leave, Wayne discovered the curb side tag axle tire was low again. He's had several people look at the nagging problem and they seem to focus on the valve stem, but it keeps leaking. Buddy Gregg's Service Center does not do tire repair so we waited to get it checked in Crossville as we will be traveling right through there today.

It was middle afternoon when we pulled into Best One Tire Service in Crossville.  In just under two hours, the fix was made and we were ready to roll once more. Turned out a single nail had made a double puncture in the tire causing the slow leak that's been a headache for almost a year.

Already late in the day, we called Spring Lake RV Resort and assumed our rightful place in site #5 for an overnight stop. Next morning we were off and running again. We are headed to Natchez Trace State Park where we'll camp for about 10 days with Gary and Shelia, et ux at Pin Oak Campground.
Email ThisBlogThis!Share to TwitterShare to FacebookShare to Pinterest