Latest Discoveries About The New Truck

Yet another discovery about the new 2015 Ford F-150 Lariat we bought in July. The odometer operates while it's being towed.

This is the trouble with getting old. Wayne and I often don't know what we don't know. Since we researched the "odometer and towing" issue seven years ago and learned that our Ford Escape and then our Ford Edge didn't accumulate miles being towed, we naturally assumed the truck would be the same.  But that's not the case.

We looked down to see the computerized gauge after a recent trip and saw the truck was getting 999.9 miles to each gallon of fuel! Wow! That's some mileage! Oops. We began to wonder and sure enough, the miles are piling on while we tow the truck behind the motorhome.

That's going to cause one of two things for us.  Either we will get rid of it right away or keep it for a very long time.  Adding our motorhome tow miles to our "run-around-town" miles and this baby is going to become a high mileage vehicle long before it's time. If we keep it forever, that might not be such a big deal, but it's trade-in value is dropping with every tow.

Let's see now... we're going to southern California this winter and on to Alaska next summer..... Hummm.
November 2015 Update: Operator error caused the mileage problem. The owners manual was not clear about it but a final step in the towing set up is to touch the start button. In doing this, the mileage does not accumulate. 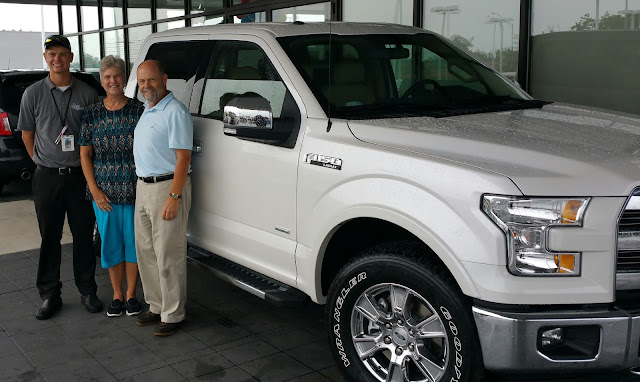 Houston, Texas
Franklin, Tennessee
...and that's before we retired to travel!