Fortunately we were able to secure a reservation at Creekwood Farm RV Park which was a pleasant place to spend the long Labor Day Weekend, notwithstanding the dozens of children on bicycles being followed by dogs on leashes. The site we were assigned (near the clubhouse) was too small for our rig so we were moved into one that I really liked much better. It faces a little creek that runs along the edge of the property. Everything is neat and well kept here. The campground management has arranged a Labor Day potluck dinner and live entertainment for Saturday night. When that night came around, Wayne and I were especially glad we were relocated as the music was L.O.U.D.

We are but a stones throw from the North Carolina entrance to Smokey Mountain National Park but we didn't go into the park this year. Experience has taught us that our most enjoyable visits into this popular national treasure come during much less crowded times -- not during holidays.

When I posted on Facebook where we were, I learned that a second cousin, whom I'd never met, lives nearby in Greenville, South Carolina.  We met up with Rob in Asheville for lunch at The Noodle Shop, just off the square near the Vance Memorial.

Downtown Asheville is an active Sunday afternoon place. We'd never heard of a "pedal bar" but were fortunate enough to catch this glimpse of this one. For more information.....check out the Amazing Pub Cycle. It seems a bar is in the center of this contraption. Participants pedal to provide power to the rig. Music plays all the while...

After a delicious noodle lunch, Rob was off to tour the Biltmore House with a friend.  We walked the dogs and enjoyed the warm afternoon.

Many people have recommended we see the Biltmore while we are in the area, so we drove out to see what would be involved for the tour. Wayne stayed with the dogs while I went inside to check it out.  A huge line was formed at the $60 per person ticket window. A nice lady asked if she could answer questions for me. I must look like I need help, but anyway, I proceeded to ask for details.  She said six hours (minimum) is recommended to tour the home and gardens. Add a couple of hours for dinner in one of the several restaurants too.  Add 45 minutes each way to and from the campground and you've got yourself a good ten hour day going here.

I asked about accommodations for the dogs and learned they are welcome in the gardens but, of course, not inside the home. The Biltmore kennels were closed, as are other local kennels, due to an outbreak of dog flu. Wayne confessed that seeing the Biltmore isn't really on his bucket list but he will go if it's something I want to see.  I only took a minute to decide we will save the Biltmore tour for another time and perhaps with friends to make it a more enjoyable day. We will make advance arrangements for the dogs. 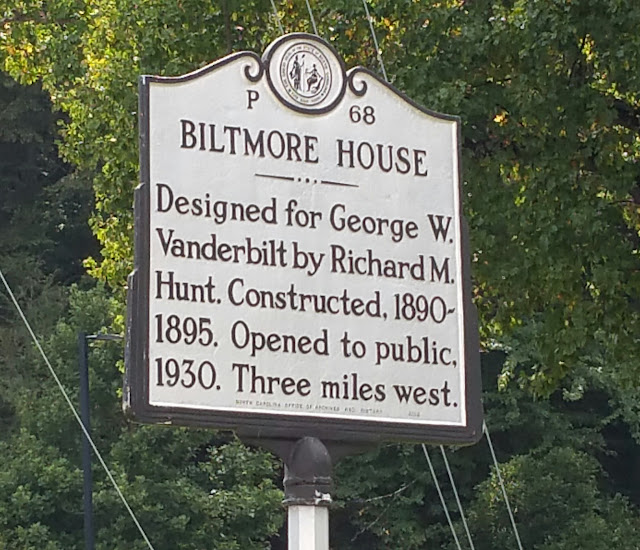 A quick look into my History Now app and we zip around Asheville for other notable sights, including McCormick Field, where "The Bellyache Heard Round The World" caused baseball great, Babe Ruth, to collapse as he disembarked the train in Asheville. For detail reports and pictures, click here and here. 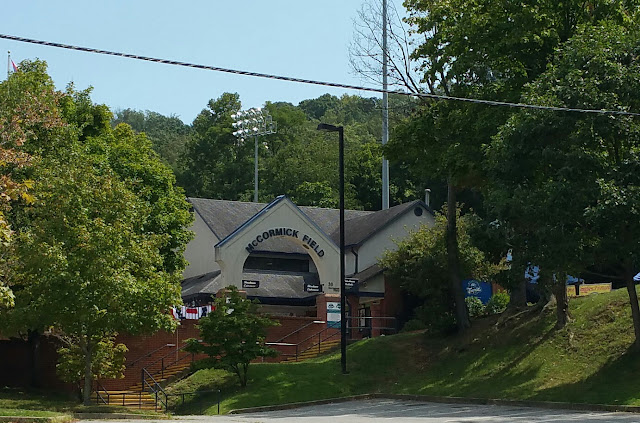 So much for Asheville....

Back in Waynesville, we found ourselves camped just a few miles from Franklin where friends we made while at Buddy Gregg RV (Knoxville) a couple of months ago, were camped. We planned a rendezvous with Sandy and Dave at  Haywood Smokehouse where we encountered some kind of delicious southern barbecue, campfire taters, smoked mac 'n cheese and creamy coleslaw. Sandy and Dave came from Franklin on their Harley-Davidson today and would stop by our campground for a short visit after lunch. We are working hard to convince them to join us on the Great Southwest To Alaska Journey.  The only photo is the one below. I asked the waitress to take a picture and this is what I got.  Cute. Real cute.

There's a public golf course at Lake Junaluska, just a few miles from our campground. One overcast afternoon we took a ride over to play nine holes.  It was the first golf course I've played that had a gravel cart path.  Our play stunk really bad but we had a good time. Here are a few pictures...

In addition to the poor cart path, the course itself was scraggly and cramped. We found ourselves playing the wrong holes at least twice. Seems the course had originally been 9 holes but was stretched to 18. The online price for play was wrong and the cart rental fee was per person not per cart, as advertised, making what was to be an inexpensive short game, a much more pricey round of golf on pretty poor grass. 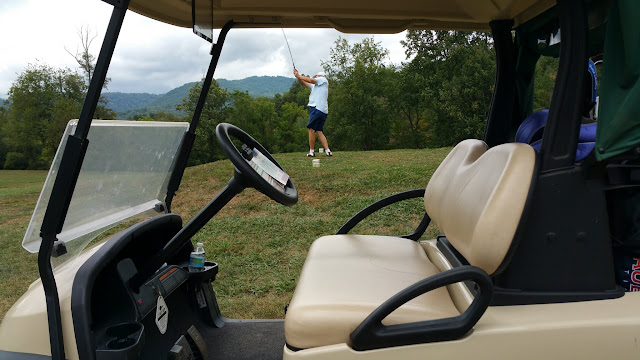 We stayed only seven days at Waynesville and we didn't make the late afternoon trip to the nearby field known for the regular gathering of elk. Something else that will have to wait until the next visit, I guess.

The coach's small electric bedroom slide has developed a "rub" that's worrisome so we decided, at the last minute, to return to Buddy Gregg in Knoxville to have it checked. Hope it's nothing major.
Email ThisBlogThis!Share to TwitterShare to FacebookShare to Pinterest