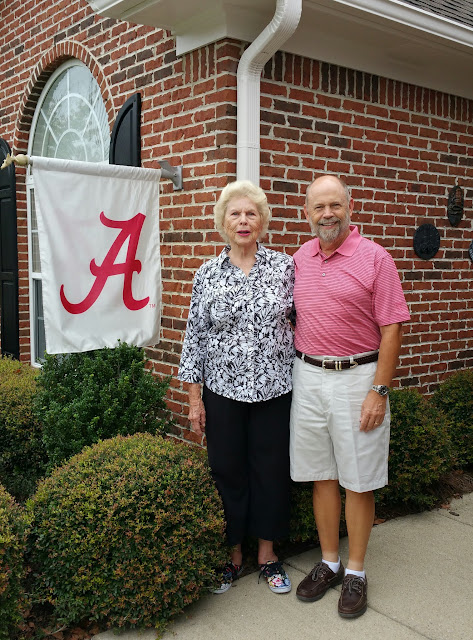 There's an RV park in Birmingham near the Hoover Met ballpark where we stay when we visit. There's not much too it -- just an asphalt parking lot that's well lit and reasonably priced. But it works for us and we stopped here this fall to visit Wayne's Aunt Helen and cousin, Lynn.

Wayne's is a split family -- part Alabama and part Auburn alumnus and of course, Wayne is of the latter group.

It's okay, we love our 'Bama family too.

Everybody can't be for Auburn after all. 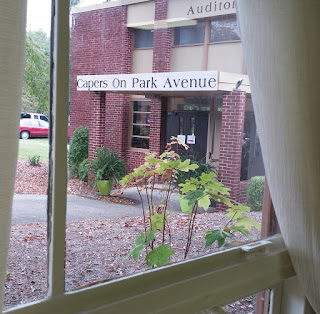 Cousin Lynn and her husband, Jay, recently opened a lunch cafeteria in the Bluff Park area of Birmingham. It's in the old Bluff Park Elementary School lunchroom.

It's called Capers on Park Avenue.

Aunt Helen went with us to lunch there and we had a wonderful afternoon eating and socializing.

As luck would have it, a bit of drizzling rain brought cool temperatures into the area and it felt a bit like autumn. 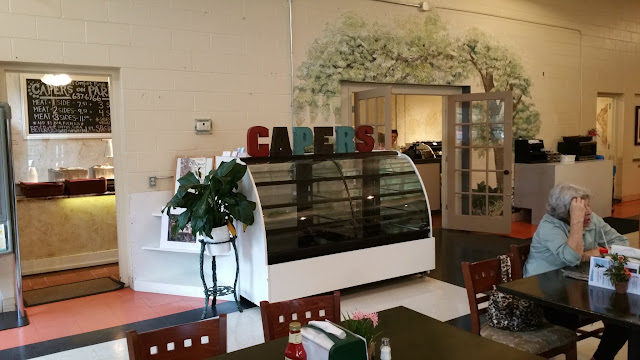 Both Lynn and Jay are chefs and their business is known as "Capers Comfort Foods". In addition to serving lunch Tuesday through Sunday at the school lunchroom, Capers is a catering business. 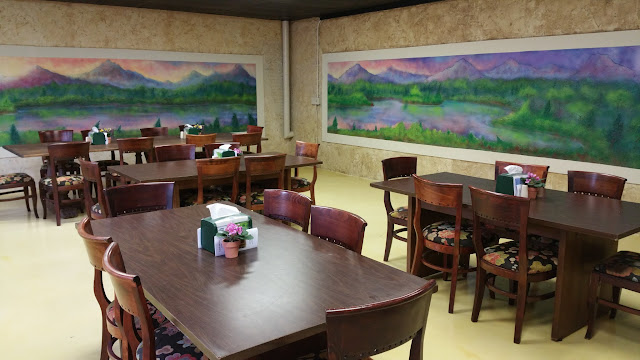 Bluff Park School  has designated this large room as a separate private meeting and luncheon area.

Capers on Park Avenue and Artists on the Bluff are a shared venue at Bluff Park Elementary School. After our lunch, we wandered the halls of the school which have been very nicely renovated to reflect the new character of this repurposed building. 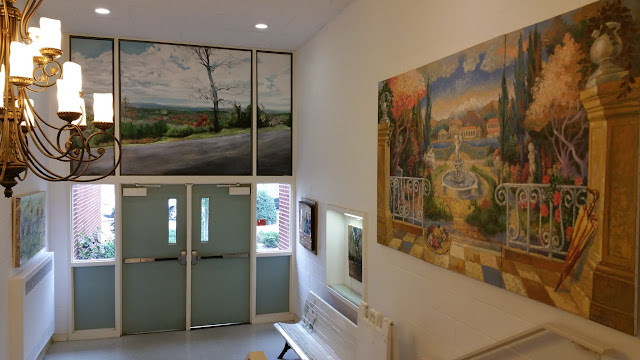 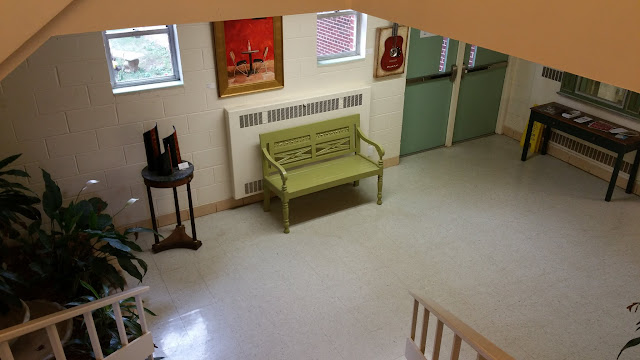 A few of the artists rooms were open and I slipped quietly inside to look around.  These are some of my favorites. They are by an artist named Rik Lazenby. His work is not cheap but it is beautiful and unique.

What a nice way to spend a cool autumn day with Aunt Helen.  Good food and family and a way to walk some of the calories off.

It had been several years since either Wayne or I had toured the famous Birmingham Iron Man, Vulcan. He is the original god of fire and metals. One afternoon we took the dogs out for an afternoon and found ourselves in this nice old park. It's been renovated a few times.

The story goes that Vulcan was the god of the forge who heated and hammered metal. Unlike the handsome gods, Vulcan was ugly and lame and was cast out from Mount Olympus. He found himself on the island of Lemnos working as a blacksmith. Vulcan hammered weapons and armor for all the the other gods but did not make them for himself as he was kindly and peaceful, though horribly ugly. Being a good guy paid off for Vulcan though, as in the end, he was loved by Venus, goddess of Love and Beauty. 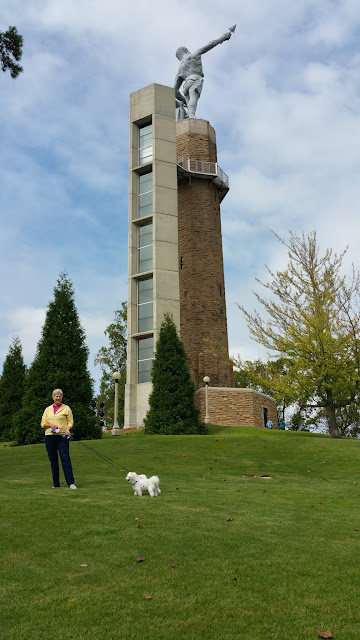 In 1871 (after the Civil War), Birmingham was founded on land of coal, iron ore and limestone.  It didn't take long for the city's founders to realize the area would become an industrial city. Less than 30 years later, Birmingham would become known as the "Magic City" because of it's rapid growth.


City leaders wanted to Birmingham and the state of Alabama to be recognized at the 1905 World's Fair and after much deliberation, decided on a statue of the great Vulcan to best represent the rich southern city.  An Italian immigrant sculptor, Giuseppe Moretti, was selected to create the Vulcan statue.

Vulcan was dedicated on June 7, 1904 at the St. Louis World’s Fair and won the Grand Prize.

The statue has a hammer in his left hand and anvil at his side. In his right hand, extended into the air, he holds a spear he has forged.

After the St. Louis World's Fair, Vulcan was dismantled and brought home to Birmingham where he held a variety of jobs, advertised a multitude of products and was painted several different colors. He was kept hidden from the public except for displays at Alabama State Fairs. Finally in the mid-1940's the citizens of Birmingham made Vulcan a public safety director and replaced his spear with a lighted cone. The cone shined green on days without traffic fatalities, red on days that weren't so good.

All that's behind Vulcan now as he stands on a nice sturdy pedestal and his spear has been returned to his right hand..  Here's more about it.


Next stop... the loveliest village on the plains.
Email ThisBlogThis!Share to TwitterShare to FacebookShare to Pinterest