Temperature high 78 and sunny    As feared, the window tint guy cannot remedy the problem with our windshield so we were free to return to the RV show this morning at a pretty early hour.

First stop today was to see the antique camper display and it was cute. Looking at things like these remind me of my age as I remember seeing these when camping with my family.

Those who know me know I'm from a hard-working family and our first camper was a homemade job my daddy built on the back of his truck. We thought we were camping in high style.  My love of camping, campfires and the great outdoors comes from my father. We never had anything nearly as nice as the beauty below... 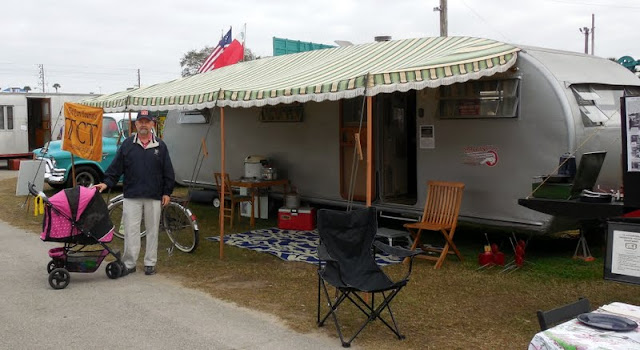 To our surprise the crowds weren't really large on this Sunday morning, the last show day. We did get an early start.  We took advantage of the freedom to wander in and out of all the coaches that ordinarily are crowded. Wayne took in all the Newmar, Winnebago and Tiffin products in addition to seeing the Monaco and Holiday Rambler coaches.  He also did a check of the Entegra and American Coach display models.

We're on the final day of the huge Tampa RV Supershow and alas! I've not succumbed to new coach fever.  Good thing.... I nearly drove us both crazy last year.

We had a great time at the Holiday Rambler and Monaco displays where we ran into several people we met here last year. We were introduced to Judy, in the photo below, owner of Alliance Coach. She is a scream!  We'll  rendevouz in Sevierville, Tennessee with this group in early spring.


Surprisingly, our feet and legs held up all day and we were still going when the displays began coming down.  All our friends had long since left the fairgrounds so we milled around by ourselves -- with the pups in tow.
In late afternoon on Sunday, Camping World was discounting 50% off some display items and we picked up a new folding chair and another grooming table. We'll return the full-price one we bought yesterday.

We would stay one more night boondocking at the fairgrounds.  We had plenty of company as many camping units were relocated into the lot where we were parked. Vehicles were moving around us until late in the night.  Next morning, we were up and gone early and making our way south.

Next stop... North Fort Myers. I'll be in touch with details of where we are.
Email ThisBlogThis!Share to TwitterShare to FacebookShare to Pinterest