I do not like broccoli. And I haven't liked it since I was a little kid and my mother made me eat it. And I'm President of the United States and I'm not going to eat any more broccoli.

Today, while visiting College Station and Bryan, Texas, we took a nice, long, leisurely tour of the George Bush Library and Museum.

President George Bush did not attend Texas A&M University. (He went to Yale as did his father and the second President Bush.) He never called College Station "home" either. We couldn't help but wonder why this location was chosen. We asked one of the ladies at the information desk. Seems that many very well-to-do Bush supporters are Texas A&M alumni and that, coupled with the hard campaigning by Texas A&M to have it built here, paid off.

﻿
The sculpture below is just outside the George Bush Presidential Library and Museum.  Sculptor Veryl Goodnight captured the moment of joy felt around the world when Berlin was reunited on November 9, 1989. That was the day the Berlin Wall suddenly and unexpectedly came down. The horses in the sculpture represent the freedom of the human spirit. The graffiti on the sculpture's crumbling wall was taken directly from a piece of the original Berlin Wall rubble.

The museum tour takes visitors through the Bush family, history (both George and Barbara's), their courtship and marriage.  Photographs and mementos from the Bush's young children, his years as an athlete, his time at Yale (third generation) and the first business ventures are on display.  President Bush's military service includes facts and photographs of the ditching of his airplane and the loss of two crew members. We followed George Bush through his time at the U.N., the Republican National Committee, the CIA, Vice Presidency and Presidency.

If we had not been fans of this great American before the museum tour, we would have been after the tour.  But yes, we do admire both Barbara and George Bush.


We finally reach the are of the Presidency of George Bush.  Many "off limits" locations of the White House were replicated here.  Below, you can see I'm giving a "press briefing".... 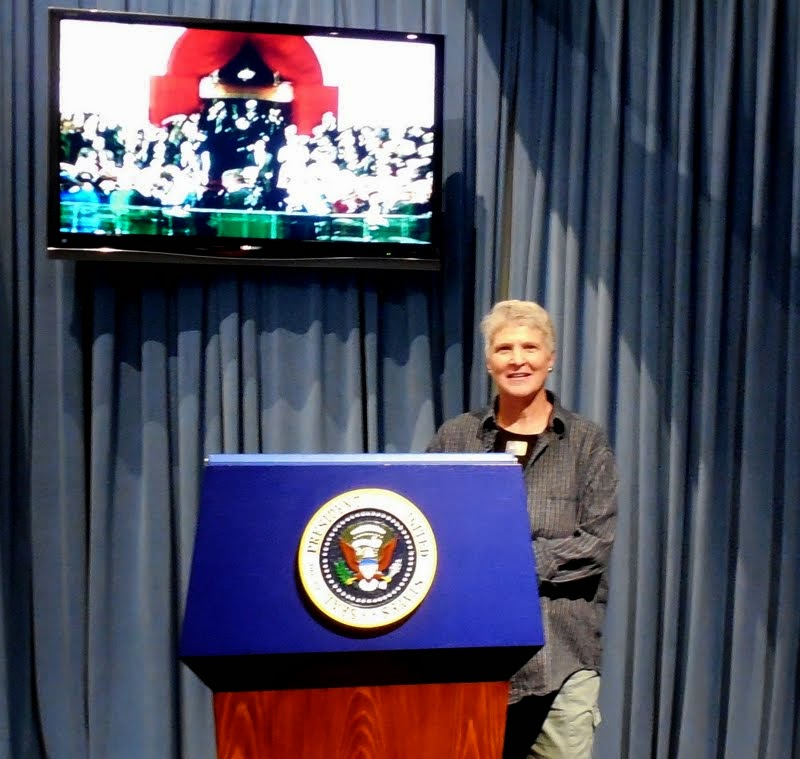 Wayne sat behind the President's Desk in the Oval Office.  Yes, Lexie and Ozzie were there.  Not to worry, they were well behaved.


We visited with the Bush family at Camp David, looked in on a few State Dinners and admired the many Gifts of State, including a large 24 karat gold fort, a gift from Saudi Arabia.

One of the last stops on our tour was to watch the difficult campaign that resulted in the loss of the presidential election to Bill Clinton.

We caught up on life with the Bush family after the White House and were invited to stroll through the gardens and the cemetery where George and Barbara will be buried.  Their second child, a daughter, is already buried here. It's the only grave and it's marked by a small inlaid stone. 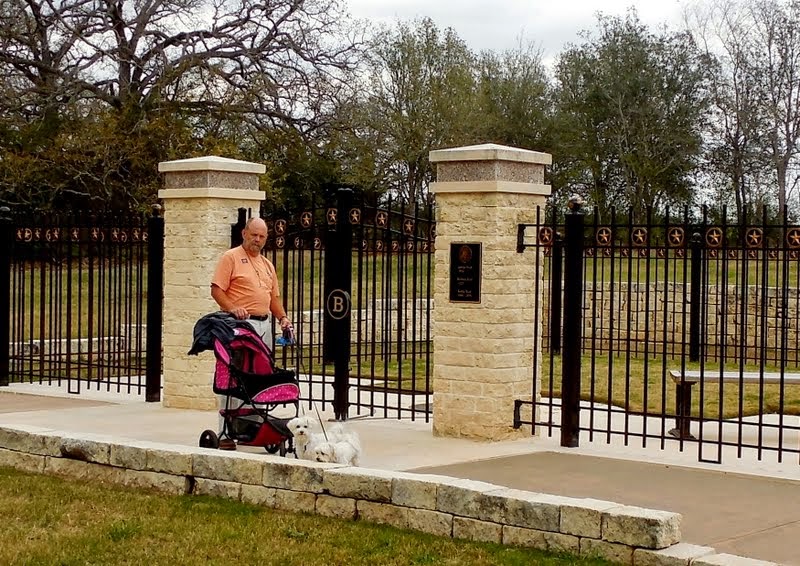 In case you're interested, you can read more George Bush Notable Quotes.
Email ThisBlogThis!Share to TwitterShare to FacebookShare to Pinterest