Our Return To Quebec City

Anyone who's ever looked at the "Favorite Places" tab of our blog knows that Quebec City is special to us.  There's something about the romance of the old cities...

We considered heading south (back to the U.S.) from Montreal, but we've not quite decided whether or not we want to take the Gaspe Peninsula trip. In the end, we delayed making the decision a few more days while we're in Quebec City.

﻿
Our campground is on the south side of the St. Lawrence River in the town of Levis. The day we visited the Old City of Quebec, we decided to take the auto ferry across in order to get a little different view.  No disappointment! 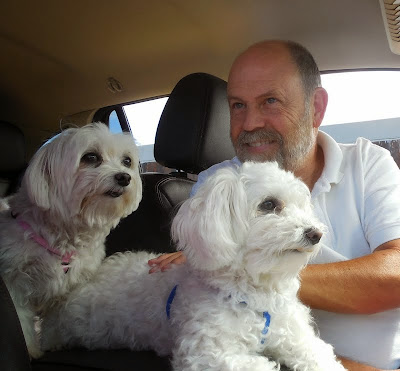 The auto ferry took only about 15 minutes and our open deck view was excellent so we decided we'd  stay in the car with the pups. I'd been a little apprehensive about Ozzie being scared of the diesel noise of the ferry engine, but he seemed calm and relaxed perched on the car's center console. The views were pretty great.

I could have snapped a hundred pictures in the short time it took for the ferry to transport us across the St. Lawrence River, but I took just a few and saved the best views of the city from near the point of dockage.
﻿
Quebec City's most famous structure is, without a doubt, Château Frontenac (photo below), a grand hotel that is now operated by the Fairmont chain. The building is a National Historic Site of Canada. It is generally recognized as the most photographed hotel in the world, in large part because of it's dominance of Quebec City's skyline. We spent hours milling around this area three years ago and Château Frontenac probably had some bearing on my falling in love with this city. It certainly wasn't the Quebecers, after all.
﻿
Another view of  Château Frontenac is in the photo below. Dozens of famous events have taken place at Château Frontenac including the Quebec Conference of 1943, where Winston Churchill, Franklin D. Roosevelt, and Mackenzie King discussed strategies during World War II. 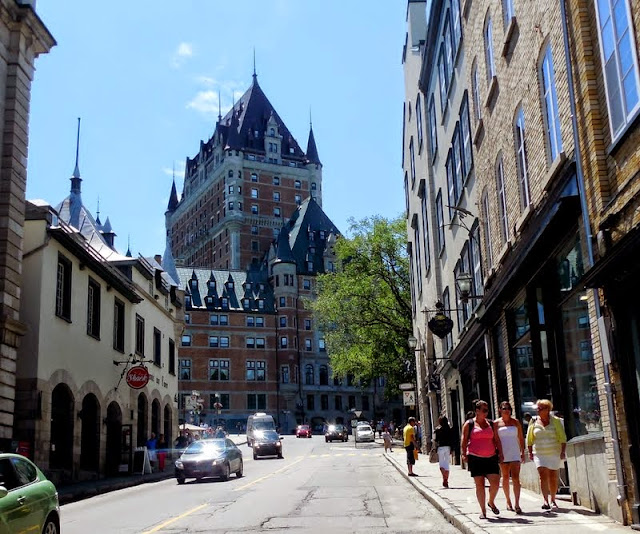 Another often photographed structure is The Parliament Building in the photo below. It is home to the Parliament of Quebec which includes the Lieutenant-Governor and the National Assembly. A wedding was happening on the lawn this day.
There's great buzz all around the area for the Celine Dion concert Saturday night. Of course, it's a sellout; but if it were not, we'd like to go as we enjoy her music. She performed to a crowd of some 40,000 fans in the beautiful outdoor setting at the Plains of Abraham the evening we were there.

﻿
The Battle of the Plains of Abraham was part of the French and Indian War, which was itself part of the Seven Years' War. In September 1759, British troops climbed the steep cliff under the the grassy fields under the cloak of darkness. The British surprised and defeated the French in a battle that was over within 30 minutes. Both the British and the French commanders died of wounds they received there. The short but important battle left Quebec City to the British, eventually allowing them to take control of all Canada the following year.

﻿
﻿
The Plains of Abraham is named for Abraham Martin (1589-1664) who was a fisherman and river pilot.  It seems Martin owned all or part of this land as deeds of the 17th and 18th centuries refer to the "Coast of Abraham". Journals of the defeated and killed French commander (and of soldiers in his command) make reference to the Heights of Abraham and the Plains of Abraham.

Old Quebec City and The Plains of Abraham became increasingly crowded with concert goers late in the day so we decided to take the short drive upriver to the historic site of Montmorency Falls.

The ride was nice and the view of The Île d'Orléans Bridge was too good to pass up. This is the farthest downstream bridge along the Saint Lawrence River, but it does not cross the entire river, going only to Isle Orleans. ﻿


The Montmorency Falls are located on the Montmorency River just a few minutes from Old Quebec City.  The falls and the river eventually empties into the St. Lawrence River.
The falls are 275 ft. high and 150 ft. wide,nearly 100 ft. higher than Niagara Falls. The basin at the foot of the falls is 56 ft. deep.

Montmorency Falls were named in 1613 by Samuel de Champlain. He named them in honour of Henri II, duc de Montmorency, who served as viceroy of New France from 1620 until 1625.

Just prior to the Battle of The Plains of Abraham (where we'd just been) Generals Wolfe and Montcalm would meet here at Montmorency. Remnants of British General Wolfe's earthen forts are still here. Wolfe's troops were repulsed by the French here, resulting in 440 British soldier deaths.  Ultimately, though, Wolfe's successful assault at The Plains of Abraham would cost the French a greater battle and ultimately the war.


﻿
An enormous cliffside staircase offers visitors a panoramic view the falls from several different perspectives. A suspension bridge over the crest of the falls provides access to both sides of the park as well as a spectacular view. There is also an aerial tram that carries passengers between the base and the top of the falls. We took neither. Staying on the ground suited us very well and the view was just fine on this warm clear day.

﻿
John Keats' 1816 poem "Sleep and Poetry" says human life is "a poor Indian's sleep, while his boat hastens to the monstrous steep of Montmorenci."

Well, that's 'bout all the history I can manage for awhile. While we've been in Quebec City, we decided to return to the U.S.A., at least for awhile, though we may return before summer's end.