The term Down East refers to an area along the coast of Maine south a-ways from the Canadian border.  Sailors refer to "Down East" as the ports east of Boston as recalled by those who felt the wind at their backs as they sailed here. They were sailing downwind, so it seemed reasonable that they were "down" east. Naturally therefore, as they returned to Boston, they'd be headed upwind. I'm told that's why many Mainers speak of going "up to Boston" even though, in fact, Boston is south of Maine's southernmost state line.  Ah ha.... another history lesson. 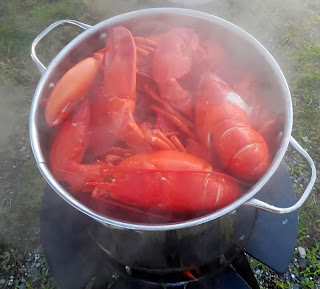 Geographically speaking though, I'm told the towns of Bucksport, Lubec, Calais, Eastport, Machias, Bar Harbor, Blue Hill and Ellsworth are "Downeast".  That's where we are at this point in time.

We're rendezvousing with friends we met here in August 2010. The late summer weather is generally mild in these parts and we look forward to seeing familiar faces, so here we shall stop for awhile.  We arrived on a Thursday and by Saturday night we found ourselves enjoying another fabulous "Lobstah Feast".


The group of friends here were met at Shady Oaks Campground near Bucksport. One of the couples bought a campground here in Ellsworth and the other couples joined him here last year. Because we have dogs (didn't in 2010) we can't camp at Shady Oaks.

It was great to re-connect with Errol, his wife Lori, their daughter, Maddie and her best friend, Allison. They're all true "Down East-a's" and genuine "lobstah" people who do not pronounce "R's".  (More 'bout that later.)

Another family is Gleason, his wife, Barbara and their son, Tim. They introduced us to "whoopie pies"... ah joy!
But the main character in the crowd of Down Easters would have to be Donnie, another lobsterman. His wife, Gina is not pictured here. Donnie and Gina serve as hosts at nearly all the gatherings. I don't think Donnie has ever pronounced an "R"....

For a dinner crowd of a dozen people this night there are at least three dozen Maine lobster, thirty pounds of steamed clams and six pounds of smoked fish. If I exaggerate the numbers here, it's not by much. Everything's cooked outside in huge pots over gas burners.  Clean-up is easy; use the garden hose.

Three years ago, Lori and Errol taught me the to eat lobstah the "Maine way"... that is to find all the best pieces easily with the least amount of mess.  I don't have the "mess" part under complete control.﻿


Surprisingly, I hadn't forgotten all my "lobstah eating pointas" yet and with a few reminders, I was on my way into my second crustacean.
What I did forget from three years ago was that you should absolutely "never, ever sit on the low side of the picnic table" while eating lobstah.  All the water runs into your lap if you're on the low side of the table.
Email ThisBlogThis!Share to TwitterShare to FacebookShare to Pinterest