From the fiasco of our overnight stop at Toronto, we drove to Ottawa, Canada's capitol, a city neither of us has ever visited.  Ottawa did not disappoint. The miserable hot weather trend finally broke and we're blessed with a beautiful clear day with and temperatures in the 70's.  Our campground is just outside the city center and is a pleasant stopover. We'll stay on for several days to see the sights and recover from the rapid pace we've kept lately.


Any visit to Ottawa must include at least a day at Parliament Hill, which is not only the heart of Canada's democratic government, but also the centerpiece of the city.  It is magnificent with spectacular views from so many directions.  Here's a favorite of the ones I took.
We visited on a Sunday when business traffic was replaced with that of tourists and there was plenty of it. A parking place on picturesque Wellington Street wasn't difficult to find though.  Lexie and Ozzie were loaded into their stroller and we were off for our walking tour.

A bankers idea of a good photography setting is the glass wall on The Bank of Canada with the beautiful Confederation Building reflection so beautifully visible.

Canada's Monetary authority is the Bank of Canada. It began in 1935, at the height of the Great Depression (my folks didn't think it was so great), which affected Canada and the U.S. alike.  The Bank of Canada is the agency that sets Canadian interest rates, issues the country's paper currency and protects its security. As Canada's federal government banker, the Bank of Canada helps manage government funds and public debt.
﻿
Ottawa is on a major, but fairly dormant earthquake fault line. The city has seen the occasional earthquake including a 5.2 on New Years Day 2000 and another of the same strength as recently as May 17, 2013.  Surprisingly our visit is just 2 months after that one.

In December 1857, Queen Victoria named Ottawa Canada's capitol specifically because of it's geographic location. It is far enough into the back country to be defensible, yet easily accessible via the Ottawa River. It's situated almost exactly between Toronto and Quebec City.
﻿﻿

The statue in Wayne's photo above, is of Queen Victoria. The monument's creation was part of a lavish celebration of the Queen's Diamond Jubilee in the sixtieth year of her reign. It was first displayed at the Universal Exposition in Paris in 1900.

Nearly twenty statues adorn Ottawa's Parliament Hill including one of Queen Elizabeth II sitting astride her horse, Centenial.  Unfortunately, we missed it completely so there's no photo. Drat.

My favorite of the buildings on Parliament Hill is the main branch of the Parliament Library, in the photo below. This is the research resource for the Canada's Parliament. (I'm guessing it serves the same purpose as our Library of Congress, but that's just a guess). It's behind the Centre Block of Parliament Hill and is the only remaining part of that larger building's original incarnation.

The Parliament Library Building survived, surprisingly undamaged, the terrible fire in February 1916 in which the entire Center Block burned to the ground. The present buildings were begun in September of the same year completed eleven years later.


Another view of the Parliament Library includes the Victoria Tower Bell in the photo above. The bell is the only surviving part of the Parliament Tower fire of 1916.  The story goes that the fire raged as the tower bell tolled at midnight. At the twelfth stroke of midnight, the bell fell to the ground. It was recovered and is placed here in this monument at the exact angle it lay on the ground where it fell that night long ago.

﻿
﻿
We were surprised to see a fairly new Supreme Court Building at Parliament Hill. It is in the traditional, but subdued modern Gothic Revival design but it is evident that it is new.  It was built in 1949.  The old Supreme Court is the only structure on Parliament Hill to have been intentionally destroyed. After the new building was complete and occupied (1949), the old one was first condemned and then demolished. It's site is now a parking lot.  Bad idea but so goes progress. Ugh.

Winding down our beautiful morning, Ozzie and Lexie ran into a friend right there on the grounds of Parliament Hill -- this big, black groundhog. We've only seen brown ones.  This fellow had captured the attention of a dozen or so tourists who took his picture as though he were a celebrity.  Fortunately, Ozzie didn't bark or try to jump out of his stroller to greet his Canadian friend. We found him interesting enough to include here.

Hot dogs from a street vendor served as a delicious lunch when we arrived at our next stop:

Canada is a constitutional monarchy where duties of the head of State and head of Government are distinct. The governor general represents The Queen in Canada and exercises the responsibilities of the head of State on behalf of Her Majesty.  He is the commander-in-chief of Canada. Rideau Hall is where he resides.  We enjoyed a lovely afternoon visit to Rideau Hall, including a close-up visit to the entrance and a view of the changing of the guard.
Rideau Hall has been the home of Canada's governor general since 1867. This property serves as "home away from home" for visiting dignitaries and even England's royalty, including the Queen of England. The grounds are open to visitors who are welcomed right up to the front door and tours of the building are available at certain times.

A few other recognizable names to Rideau Hall include John F. Kennedy, Mikhail Gorbachev, Corazon Aquino, Lech Walensa, Dwight Eisenhower and Prince William and his bride Kate, just after they were married. Their trip to Canada was their first abroad since the wedding.


Visiting dignitaries to Rideau Hall are asked to plant a tree. The park grounds are beautiful and shady with nearly 100 trees, each with it's own small plaque at the base listing the name and office of the person who planted each one. Among the planters... Queen Elizabeth, The Queen Mother; Diana, Princess of Wales; Prince Charles, Prince of Wales; King George VI; and numerous by Queen Elizabeth II. Foreign dignitaries who have planted trees include John F. Kennedy, Jacqueline Kennedy Onassis, Richard Nixon, Bill Clinton, Kofi Annan, Boris Yeltsin, Vladimir Putin, Vicente Fox and Emperor Akihito. 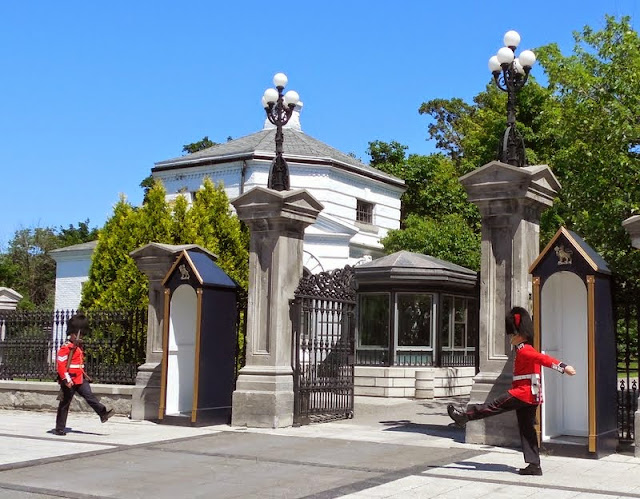 We strolled the grounds of Rideau Hall for several hours and then drove back through the heart of Ottawa.  The location of the Prime Minister's home was told us and we drove by it. Surprisingly different from the home of the U.S. President, this home looks almost like any well-to-do family might live there.  Make no mistake though,  I'm sure it's very well protected. ﻿ 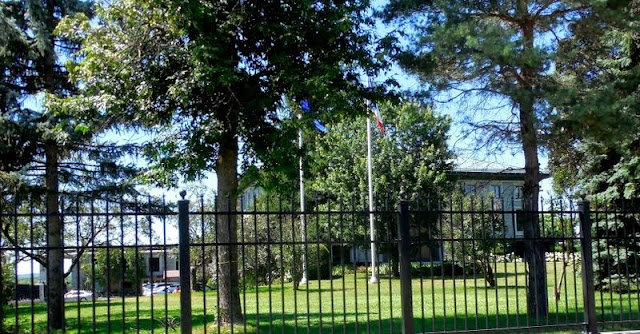 A couple other points of interest in Ottawa... particularly to a retired banker, would include the Royal Canadian Mint. Too bad we couldn't get a better view for a good picture.

﻿
Towards the end of our afternoon, we saw several embassy buildings, including our own in the photo below:
﻿

Ottawa might well go onto my list of favorite places... we'll see.  Our next stop will be Montreal, where we've both been, but are looking forward to again. Come along if you've got nothing better to do.
Email ThisBlogThis!Share to TwitterShare to FacebookShare to Pinterest