Clamming: It's The Maine Thing

As a result of my successful lobstering adventure two weeks ago, I've been challenged to try my hand at clamming in the coastal Maine mud flats. I accepted that challenge and waited for the date, time and location to be set.  These Maine roughens think this old gal will crumple under hard work.  They do not know me.
And so, last Sunday Wayne and I drove to Blue Hill where we met Errol and Lori. The four of us drove on to Stonington, where we'd meet Donnie, Gleason and Tim for the clamming excursion.  Along the way, we crossed Caterpillar Hill where the view of coastal Main is spectacular.  The land closest to the road grows blueberries. Errol and Lori pointed out several bays, islands, towns where they grew up and the point in the far distance where the water became the Atlantic Ocean.


Several winding roads later, we arrived at Donnie and Gina's home. Gina is working today and we've learned that Gleason's wife Barbara is not feeling well (though I think she's faking it).  There will be seven of us to go clamming.
﻿﻿
At Donnie's, I was introduced to the tools of the clamming trade.  The wooden basket used for gathering  clams is called a hod. A trowel may be used for digging the clams from the mud.  The hod in the picture below has a clam measure attached to check the size of clams to be sure they are legal.  What my friends didn't tell me at that time, is that the hod below would not be the one I'd use.  Mine would be larger, therefore heavier. And instead of the small trowel in this photo -- I'd get a heavier, short handled, four pronged, rake-like apparatus to use for digging. 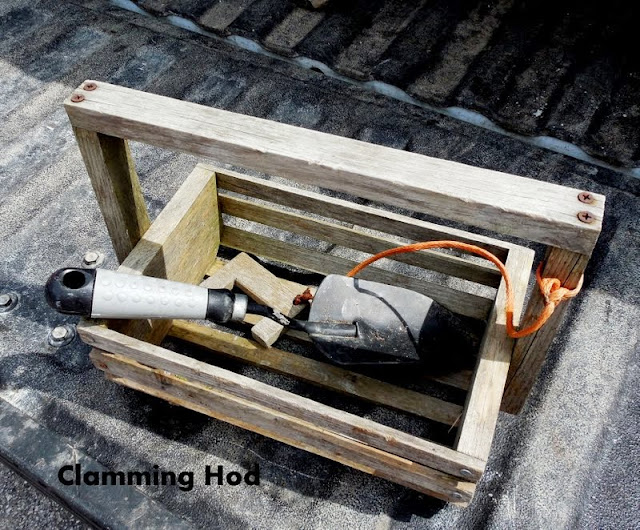 As I've mentioned in earlier posts from Maine, Donnie is a lobsterman by trade. It's all he's ever done an he is quite good at it and well known in these parts.  His Stonington home reflects his love of coastal Maine and his interest in lobstering. On his property, old lobster traps are stacked seven foot high while lengths of old tied rope and lobster marking buoys are piled in great heaps. I was fascinated by all this stuff.

﻿
But low time was near and it was time to move on to clamming. Errol and Lori in their truck and Wayne and I in our car, followed Donnie, Gleason and Tim down winding roads and switchbacks into the most difficult places to reach the "secret clamming spot" Donnie would share with us.  We were deep into coastal Maine when the asphalt ended and the road narrowed to one lane with just enough space for a pick-up truck to maneuver without scraping the roadside tree limbs.  I expected to see a moose or a bear, but didn't.

﻿ From where we left the vehicles, we'd hike another quarter mile through the woods, then into the high grass along the shore before we even reached the mud of the clamming flats.

Low tide in any body of water is stinky and ugly, as far as I'm concerned. But the ugly low tide is required for clamming and somehow this was a pretty setting and I didn't notice the usual bad smell.

﻿ Tall rubber boots are an absolute necessity for clamming. Errol loaned a pair of his rubbers to Wayne and I used a pair of Lori's that were very comfortable I must say. What I didn't know when I accepted the loan of her boots was that Lori would go out into the mud in her flip-flops and I felt terrible wearing her boots while her brand new pedicure was being ruined in the mud.  She insisted she would not have worn her rubbers because she had no intention of clamming.  I still felt terrible.

And so we did reach our destination in the mud of what appears to be a shallow bay. Donnie, Gleason and Tim are already bent over digging clams.  Wayne and I were probably pretty noticeably careful as  we're not sure how we'll manage in the soft, soggy mud.

﻿
There's just simply no way to not get muddy when one is clamming so I didn't attempt to stay clean though I did secretly hope that I wouldn't find myself flat on my rear or my face in the icky stuff.  I brought my rubber palmed gloves and that proved to be a really good thing. Even with them, I'd be cleaning the black mud from around my fingernails for the next two days.

Gleason and his son Tim clammed with us today.  I didn't realize until after the fact that today was Tim's first time clamming too.  Tim is sightless and has been most of his life. He is a fiercely independent young man and is not held captive by lack of vision. He attended regular high school here in Maine and will go away to college next month. Wayne and I were impressed by his ability to maneuver, unaided, through the rocky mud flats today.


﻿
Leaving the area where we clammed, we passed more picturesque low-tide scenery. We're headed back to Donnie and Gina's where we'll steam the clams and have them for suppah (that's supper for all us " non-Mainers"). 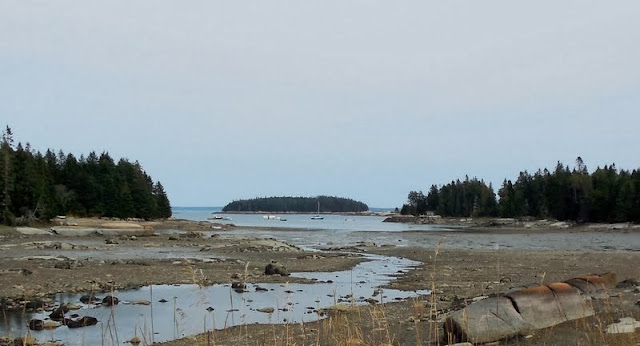 Donnie and Gina have a grand porch that's like an outside living room, complete with a huge table for eating, a grill for cooking and a hammock at one end.  There's also a mounted deer and a moose -- the later of which comes with a great story that can only be told by Donnie. It is hilarious -- and yes, he killed the dear.  It was his first.

﻿ I took a good bit of ridicule over the photo below.  Donnie saw me tossing a few "dead" clams into my hod during the dig. It's hard to tell them apart, after all. I fully expected I'd collected a fair amount of dirt, but a good laugh was had (at my expense, of course) when Donnie found this one in the steam pot.  Not pictured is the clam-shaped stone I'd also collect. Gleason found it.  Oh the grief.


After a nice recovery from clamming and suppah (supper) of hot dogs, hamburgers and steamed clams it came our time to go. All the leftover steamed clams were presented to me with instruction to "make clam chow-dah" later. I have Lori's clam chowder recipe from three years ago so I will freeze the clam meat and make the chowder.

The ride home was especially nice as we had our second Bald Eagle sighting in the past few days. Naturally, we didn't get a picture but it was a real beauty!

Another fun-filled experience with simply fabulous people here in Maine.  We'll certainly never forget these days (unless we become even more senile)... Special "thank you" to all who went to your "workplace" on your only day off.  Wayne and I look forward to the remainder of our time here but can never imagine how we'll ever repay so many for so much they've done to enhance our Maine experience.
Email ThisBlogThis!Share to TwitterShare to FacebookShare to Pinterest