Tonight we're in Wisconsin. But just barely. We're just east of the Mississippi River, in Onalaska, Wisconsin, having left Madison, South Dakota this morning at 9:30.

We did not see the Pipestone National Monument, Hormel's Spam Museum, the Jolly Green Giant or the large ball of twine that were all easy stops along the way.  Wayne has ants in his pants, I think.

The bee-line across Minnesota was made on I-90 along the very southern edge of the state where there are miles and miles of cornfields.  Wayne called it a ride through "Cornfield County" and we both got a chuckle thinking about the antics and corny jokes told on the old TV show, HeeHaw. 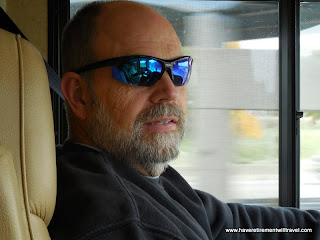 While our route today might not have been through the most beautiful part of Minnesota, the agriculture was beautiful in it's own way and it's nice to know that each Minnesota farmer feeds 177 people every day -- or was that billboard in South Dakota?  It really doesn't matter, we enjoyed seeing it all.

An absolutely gorgeous Harvest Moon led us across the Mississippi River and into Onalaska at dusk tonight. We'll move along in a generally eastward direction tomorrow morning.

Why the hurry?  I'm not sure actually.  Wayne grew tired of being in the drought stricken western states and needed to see some green -- which he will have plenty of tomorrow, I think.  Ultimately, we'll make our way south... perhaps to middle Tennessee, south Alabama and then into Florida for another go of it for winter.  Any or all of that could change...