The Auburn v Texas A and M Game: Not Really A Game At All.

Auburn University, Alabama - Temperature High 60's, Low 40's  Auburn will attempt a second season win tonight against the Texas A and M Aggies.  We're here to cheer the Tigers on but realistically, we know it will be a long shot.

The temperature dropped all through the day and clouds have moved in but we don't expect rain.

We took Auburn's Tiger Transit from the intersection of Woodfield and Donahue streets to witness "Tiger Walk" at Jordan Hare Stadium.  We rode with a nice crowd of Aggie fans and one really obnoxious 'Bama fan who insisted on belting a big "roll tide" every few minutes.

The 'Bama fan received no response from either the Auburn or Aggie fans.  The bus took a very long route but the ride was comfortable and enjoyable with the exception of the 'Bama fool who surely couldn't find her way to the "capstone" else she would have been there, wouldn't she?  Or did she just come to Auburn to show her team spirit?  Wayne was courteous to her, as he always is, when she asked foolish questions to him, addressing him merely as  "Hey, Auburn fan"....


Once off the Tiger Transit, we still had quite a walk around to Gate #10 where the players would enter the stadium.


Naturally a crowd was already assembled but we got a fair place where we could almost see the tops of the player's heads as they filed by.  All the while, the band played the usual spirited pieces and cheerleaders shouted through their giant megaphones.

Despite our long history with Auburn, this would be our first Tiger Walk and I wondered why.  When we ran upon this poster of the history of Tiger Walk, I was reminded that this "rite of passage" was still a fairly new phenomenon. 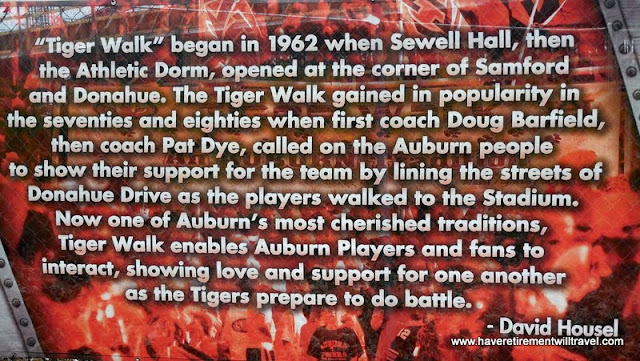 I was glad to be here even though I was embarrassed that Coach Gene Chizik did receive a low roar of "boo's" when he walked by.  I hated that for him. 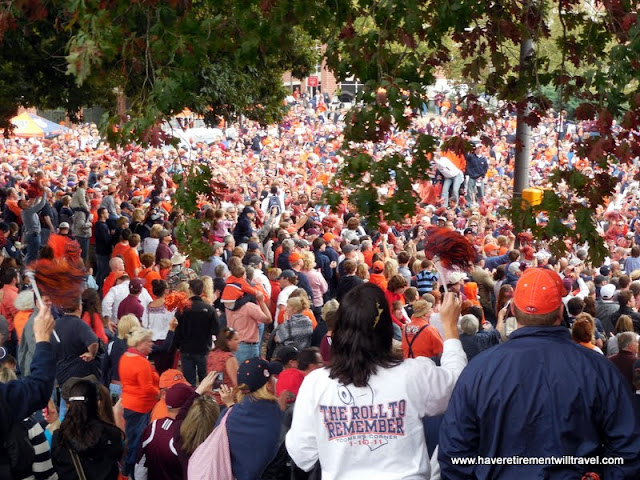 Being around Jordan Hare Stadium is exciting and Wayne really enjoys himself while we're there.  He doesn't enjoy going to night games though, so we'll watch the game from the comfort of home. 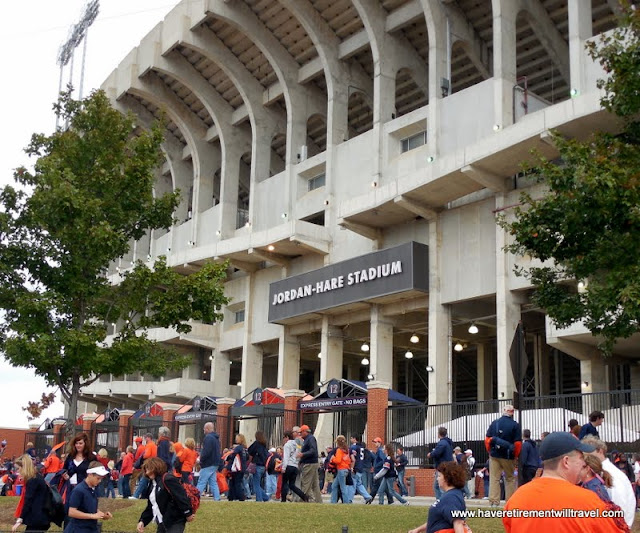 We decided to walk back to the car rather than walk in the opposite direction to take Tiger Transit back to the car. The breeze really picked up while we were on campus and the temperature continued to drop.

The walk back to the car was straight out Donahue.  We enjoyed seeing plenty of revelry and several drunken fans on both sides. 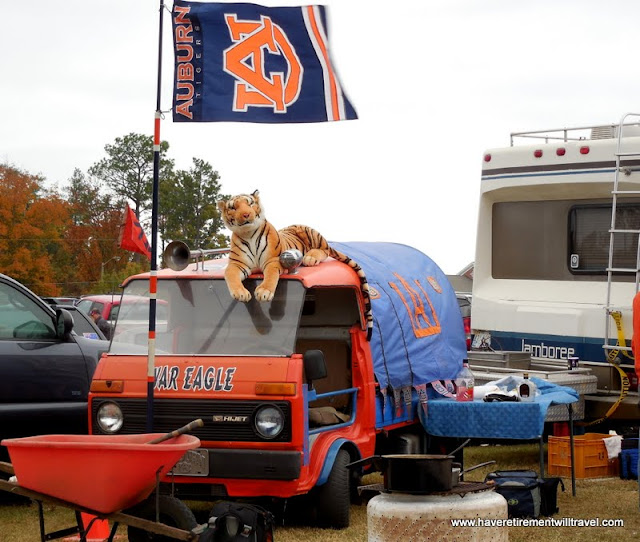 Returning to the coach, we found Lexie and Ozzie had found and destroyed an entire pad of scratch paper, including several important papers I was working on. This means they had found their way from their window sill to the kitchen table and my work station.  Ozzie had put two of his toys in his bed... I think to take the blame for the mischief.

Not surprisingly, Auburn lost to the Aggies and the mood around Auburn, the campus and the campground is not real good.
Email ThisBlogThis!Share to TwitterShare to FacebookShare to Pinterest