Auburn -- The Lovliest Village On The Plain

Auburn, Alabama -- Temperature high 81 (Sunny), low 50:  We arrived in Auburn two days ago, stayed one night in a site at Chewacla State Park from where we couldn't get satellite reception. We promptly relocated ourselves into another spot the next morning -- the same one we spent several weeks in last year.  Here we have good satellite reception and our patio space opens onto a large tree-filled yard. With a full southern exposure, the sun is hot at 81 degrees in full sunshine. Hopefully the temperatures will come down a bit in a few days.  Our plans are uncertain as to how long we'll stay here and there's no real reason to move along for several weeks.  Four home games (Texas A and M, New Mexico State, Georgia and Alabama A and M) remain before the Tigers play 'Bama in the Iron Bowl the weekend after Thanksgiving. The Iron Bowl will be held in Tuscaloosa this year and we will not attend.
Auburn is having a difficult football season, losing all their games except one, which was a near loss.  While the losses have caused a lot of disappointment, we support the team in losing seasons as well as in winning ones.  Today, the Auburn Alumni Association sent a email encouraging everyone to attend a surprise pep rally at the practice field.  We donned our school colors, loaded the pups into their stroller and made our way to the campus.

We stopped in at Walmart for football weekend supplies and came upon the southern traditional favorite, Golden Flake truck with an inflatable "Aubie" alongside. 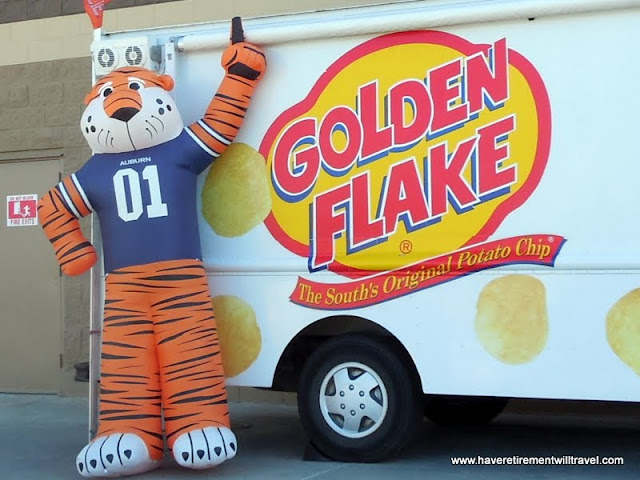 Notwithstanding the Auburn Tigers poor performance thus far in this football season, we're here to support and cheer 'em on against the Aggies this weekend.   Wwwaaaarrrrr Eagle!
Email ThisBlogThis!Share to TwitterShare to FacebookShare to Pinterest