Sightseeing In Ft Worth and the $9,800 Purse

Arlington's ritzy new sports stadiums and Dallas's memorials to tragedy have nothing on Fort Worth.  It is, after all, this is America's Cowtown and it's impressive to visit -- if you know where to look.
As usual, our Texas Travel Guide and companion map gave us the lowdown on things to see and do.  This day, we picked several of the most desirable sites, did a little extra research on some things not listed and then loaded the dogs into the car for the short 45 minute drive to Ft Worth from Denton.

Fort Worth began as Camp Worth when, it 1849 Major Ripley Arnold chose the site because of it's desirable location at the confluence of two forks in the Trinity River.  Major Arnold named the site for his recently deceased former commander and Mexican War hero General William Worth.

Our first destination today is one not included in the travel guide. It is, in fact, one destination that is never in the mainstream tourism publications. It's the burial place of Lee Harvey Oswald, accused assassin of President John F. Kennedy.  Oswald is buried at Rose Hill Memorial Gardens on Lancaster Avenue.
For any of my blog readers who are so inclined (and possibly ghoulish) as to want to find Oswald's grave, here are some of the markers and photographs to guide you.

A very short distance from Rose Hill Memorial Cemetery, along East Lancaster, we passed The Ozzie Rabbit Lodge.  Is it simply an interesting coincidence that Ozzie Rabbit was the nickname given to Lee Harvey Oswald by his Marine pals just before he left the military to join the Communist Party?  I dunno.  Anyway, this Ozzie Rabbit is reportedly a hangout for punks, bikers, hipsters and others who march to the beat of a different drum.
We didn't linger around this area but made our way into the city of Fort Worth to find yet another grave.  This would be the burial place of Ben Hogan at Greenwood Memorial Park.  Lady GaGa (our Garmin's new name) took us directly to the cemetery but alas... she can't find graves!  Wayne being the "all wise" one he is, did not ask for directions so he wandered around hundreds of corridors in the Greenwood Mausoleum before finally asking one of the landscape laborers (yes, you read that right, landscape guy) who could not help but tried -- in another language, of course.

Fort Worth is America's 16th largest city by population and is nicknamed Cowtown.  We passed several beautiful old buildings that were either uninhabited, for sale or totally abandoned and some  lucky ones being renovated.

Lady GaGa took us next to see the Will Rogers Memorial Complex that is the site of Ft. Worth's Southwestern Exposition and Livestock Show.

Sadly, at least to me, these beautiful old buildings here too seem to be falling into ruin while new, glitzy ones are being built on the adjacent property.  There was no one at the Visitors Center except a parking attendant who did not speak English and could not tell us where the Visitors Center was (it was right behind him but it was un-manned).

Leaving here, on the drive through downtown Ft Worth to the Stockyards National Historic District, we got a glimpse of Sundance Square Downtown Entertainment District, named for Butch Cassidy. It's a 35 block area of theaters, galleries, museums, night life and fine dining.  We didn't stop or spend any time there as there was just so much business traffic during the day.

We did stop long enough to take a photo of the mansion known as Thistle Hill.
Next stop: The famous Fort Worth Stockyards National Historic District.  Here we saw the Texas Cowboy Hall of Fame, the Stockyards Museum, the Texas Trail of Fame, Livestock Exchange Building, Cowtown Coliseum, the stockyards and lots more. Before we parked, we drove the very short distance to Billy Bob's Texas.

The streets in the Stockyard District are mostly cobblestone. The stops are short and the intersections have dips, turns, stops, starts and bounces.  We heard Ozzie start to vomit. He got car-sick!  Poor baby.  Wayne quickly found a shady spot to park and we got our sick boy out for a walk.

It was mid-afternoon and the sun was hot. We left the car in the shade, loaded Lexie and Ozzie into their stroller and took a walk around the Stockyard District. 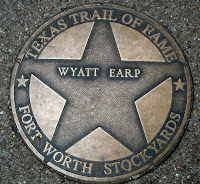 The Texas Trail of Fame is more than 100 bronze inlaid markers that honor men and women who made significant contributions to the Western way of life. Honorees include Roy Rogers and Dale Evans but I never found their markers.

As lovers of good leather work and fine cowboy boots, we ventured into the corner store of M.L. Leddy, famous saddle and boot maker. Surprisingly, I asked for, and received permission to bring Ozzie and Lexie into the store in their pink stroller (Ozzie says real men can ride in pink). 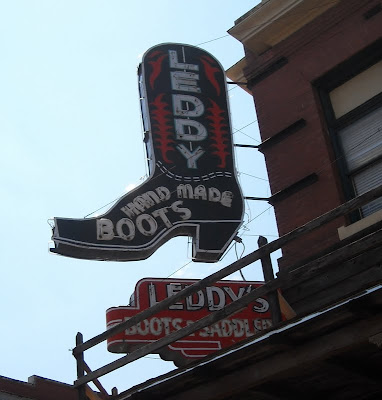 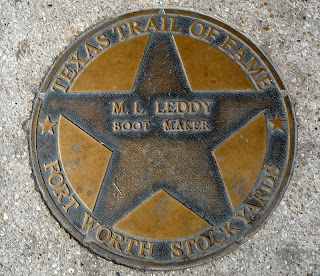 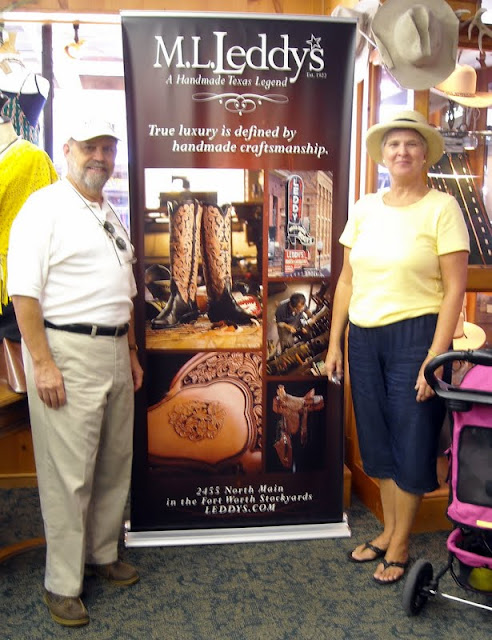 Anybody who knows me knows I'm thrifty so you can imagine the look on my face when I picked up a crocodile handbag with a $9,800 price tag!  It wasn't even locked behind bars!  There were also several $8,000 saddles on display (please don't sit on them though).  Wayne pored over belts, buckles, boots and hats. We bought nothing. 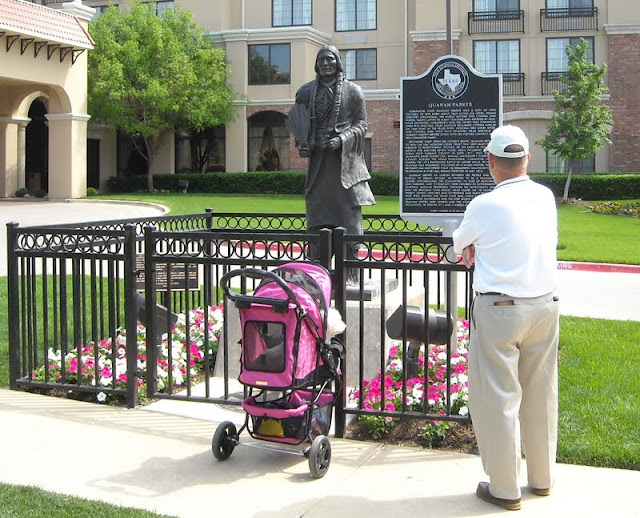 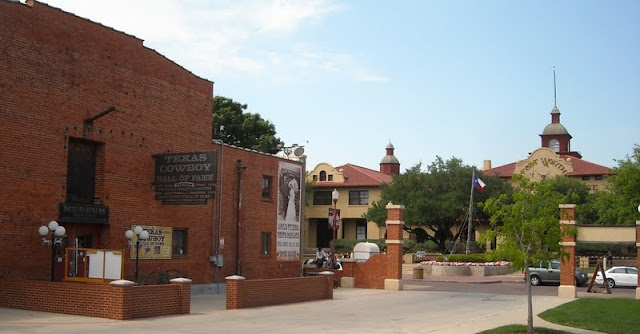 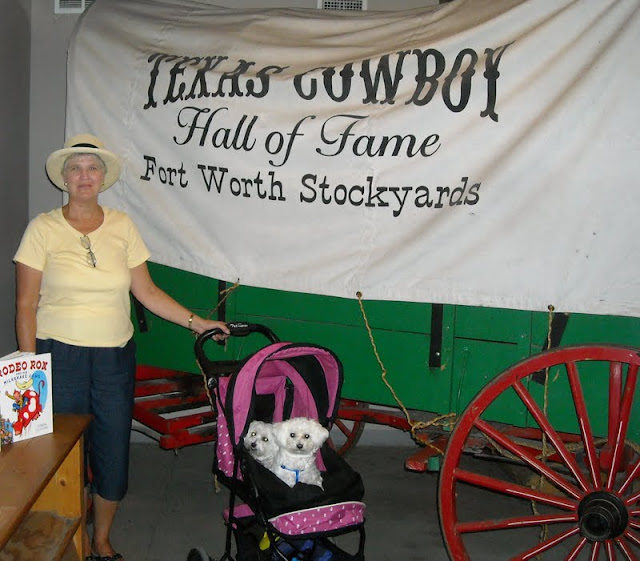 We purposely waited the last hour before 4 p.m. to see the afternoon cattle being driven down the cobblestone street, whiling away some time in the museums and gift shops.  Imagine our surprise and disappointment to have our camera batteries die just before the drive began!  We did not have extras with us.  Duh.  We found a bench under a shade tree in front of the Livestock Exchange  and watched about 20 longhorns being driven by about 10 men in cowboy hats on horses. One of them let out an occasianal "yelp" to the cows.  I couldn't help but wonder if the same cows walk down the street twice a day every day.   Ummmm.

Our last sightseeing visit today would be the campus of Texas Christian University. We drove around the campus and a few of the nearby neighborhoods, which were very nice. This would be a good place to live it it were not so hot here in summer. 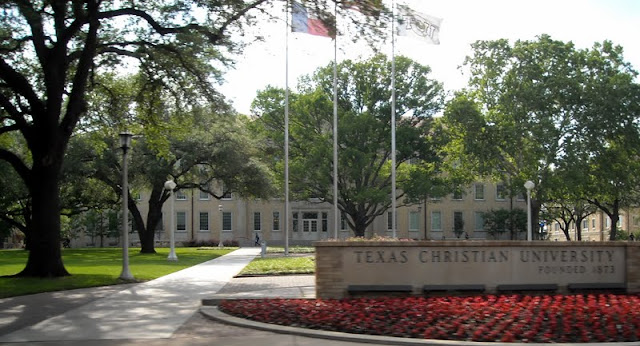 Returning to Destiny Dallas RV Resort in Denton we passed the absolutely huge Texas Motor Speedway. Exhausted and uninterested in car racing (of any kind), we had no interest in stopping, but did take note that there were hundreds of campers in the adjacent campground area. We've been seeing "Welcome Race Fans" banners around town so I suppose a NASCAR event is in the makings.  I think I read that this facility is the second largest in the country and hosts both Indy and NASCAR races.   Goleeeee!
Email ThisBlogThis!Share to TwitterShare to FacebookShare to Pinterest