The GPS makes navigating in large cities so nice. Our Miss Garmin gives so much assistance, but as Wayne says, she does, on occasion, take a "nip" so we don't put blind faith in what she says.
On this day Miss Garmin guided us flawlessly through the maze of highways and streets of downtown Dallas, right to our destination, Dealey Plaza.
﻿﻿

We found a parking meter space just two blocks from Dealey Plaza, alongside the beautiful old courthouse, built in 1892 of red sandstone.

﻿ We loaded Lexie and Ozzie into their pink stroller and made our way over to see the sites.  We both have been here during previous visits to Dallas, but we made sure to take plenty of pictures for the blog this time.

Dallas was founded in 1841, the same year the of the first ever death of a sitting US President, William Henry Harrison. Funny how all the other fascinating history of this beautiful, historic city has been overlooked in the pursuit of resolving the riddle of Camelot.

Tennessee lawyer, John Neeley Bryant, founded the city.  He claimed this exact 640 acre parcel of land and settled here.  The city name was for the vice-president of James K. Polk. The name "Polk" was already taken.  No really, that's what I read.


Bryant caught gold fever in 1849 and went to California, selling land that would become the site of the Texas School Book Depository. Without striking gold, Bryant returned to Dallas, took to hard drink and shot a man in 1855. In 1877, at age 67, he was admitted to the state insane asylum, where he died a few years later. His final resting place is unknown.

Interestingly, Dealey Plaza itself is a landmark outside of the distinction being the location of the JFK assassination. The name honors George Bannerman Dealey (1859-1946), publisher of the Dallas Morning News, for his untiring work to revitalize the area of the beautiful triple underpass -- perhaps the last view of John F. Kennedy before his assassination.
﻿ From the Grassy Knoll, we walked back to the School Book Depository Building and browsed around the lobby of the Sixth Floor Museum and gift shop.
﻿﻿
﻿ From Dealey Plaza we went to see the second most visited site in Dallas: The Pioneer Plaza Cattle Drive located at the intersection of South Griffin and Young Streets. 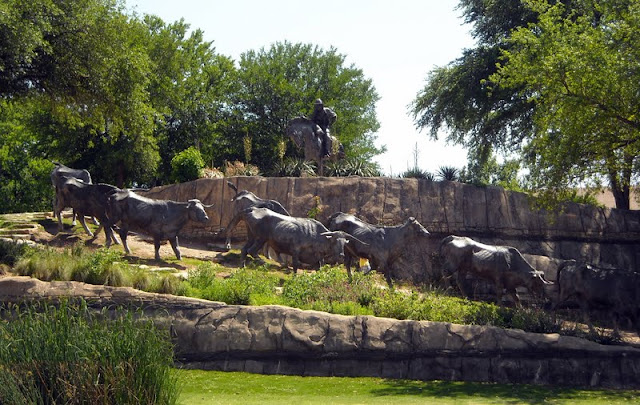 This huge sculpture honors the cowboy past by celebrating the trails that brought settlers to the area. There is a native landscape complete with flowing stream, waterfall and a re-creation of a cattle drive in the form of bronze statues of longhorn cattle being driven by three horseback cowboys. The sculpture is believed to be the largest bronze work in the world.

I had read in our Texas Tourism Book about the Dallas Farmers Market being a favorite attraction we took in a visit before we left the downtown area.  It was, undoubtedly, the largest and most well stocked farmers market I've ever seen.  Because parking was available under the sheds, I got out, left Wayne and the dogs in the car, and had a feast of fruit and vegetable samples.  I loaded up with some of my favorites within a few minutes. 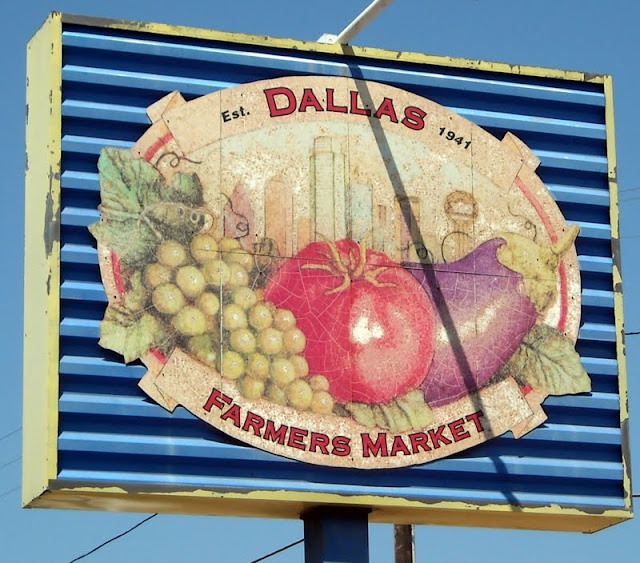 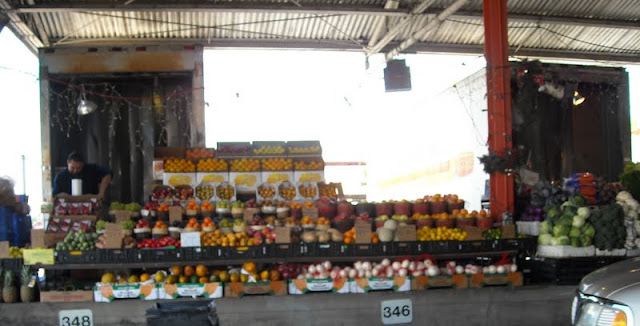 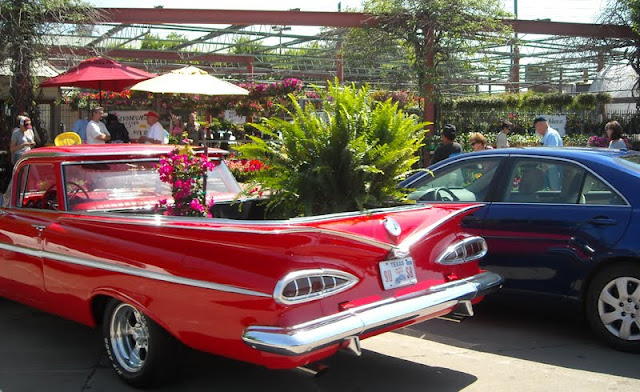 Another spot we wanted to visit was the Cotton Bowl. Wayne's dad had played football in the Cotton Bowl during his time at OU in the 1940's.  The stadium, along with several museums and gardens, are all in Fair Park and there was a long line of cars waiting to get in so we just drove around the perimeter. It's almost noon by now and getting really hot so we wouldn't be able to leave the dogs in the car anyway.  Sadly, because the Cotton Bowl is in the middle of the park, it's almost impossible to get a good photo of the stadium. Here is the best I could do: 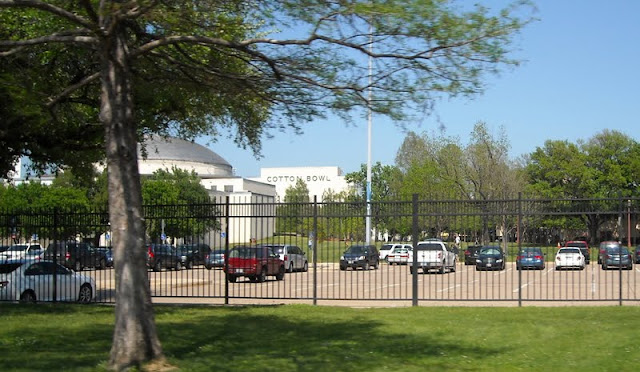 From here, we headed back to the campground in Terrell.  Because of the early heat this spring, we've been uncertain which way to go when we leave this area. We've been looking forward to touring the state during cool spring temperatures, but that might not be possible this time.....
Email ThisBlogThis!Share to TwitterShare to FacebookShare to Pinterest