Along The Road From Denton, Texas to Norman, Oklahoma

In the end, it took nine days to replace and then install the shattered window so we finally left Denton, Texas and went looking for cooler temperatures.  It's already reaching into the 80's nearly everyday.

One of the things I did to occupy my time in Denton was play around with pictures in Picasa and Picnik. The purist in me gave way to a bit of daring and I promised I'd do some fun things with some of the pictures I take and then post on the blog.  Here's some of what I've been doing.

Wayne did some system maintenance checks on Endie while we waited around in Denton and found the batteries were very nearly dry.  This isn't a good thing to find on a brand new coach and he was a bit angry at the prospect of damaging to the pricey replacement. To add water, he had to disconnect the house batteries and  then found the solar panel inoperable.

On our way out of town we passed I-35 RV Center and decided it would be worthwhile to make the U-turn to ask Craig and Johnny Stack to take a look. Johnny came to the campground last week to replace the tan window awning that was mistakenly put on the curb side with the new black one sent to us from Tyson at The RV Shop in Baton Rouge.  We were real happy with the work Johnny did and sure enough, he fixed the wiring problem quickly and we were back on the road quickly. 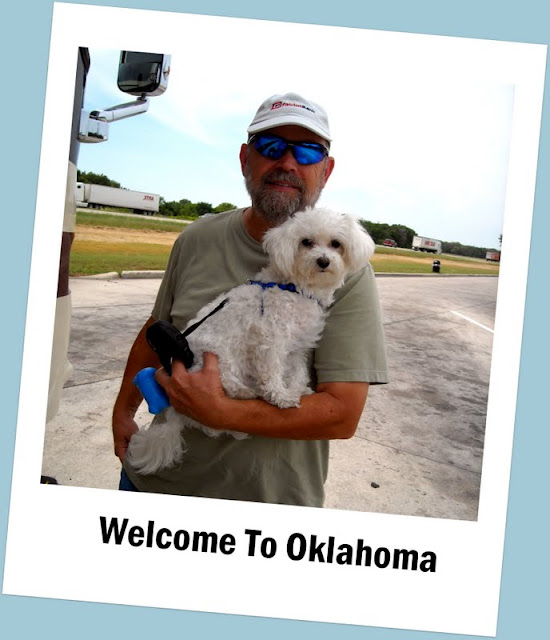 We stopped in at the Oklahoma Welcome Center on I-35 to get a travel guide.  I had to take this photo of Ozzie taking his position on Wayne's arm. He gets into this position every time and just begs to have his picture snapped!


We only got as far as Ardmore, Oklahoma that day. We drove the few short miles east to Elephant Rock Campground at Lake Murray State Park.  Just one night though and we're off again. The temperatures and humidity are so uncomfortable to us we've just got to get into some cooler weather.

Next day, Lady GaGa found a Walmart at the Pauls Valley, Oklahoma exit and to our surprise, we saw a Braum's Ice Cream Store too!  Hamburgers, fries, shakes and two waffle cones later, we returned to the coach to find almost our entire supply of paper napkins shredded all over the sofa and in the dog beds. For a good long time Ozzie has been shredding paper when we leave them alone. This day, he walked along the counter from the window sill to the table where he simply gathered the napkins directly from the dispenser! 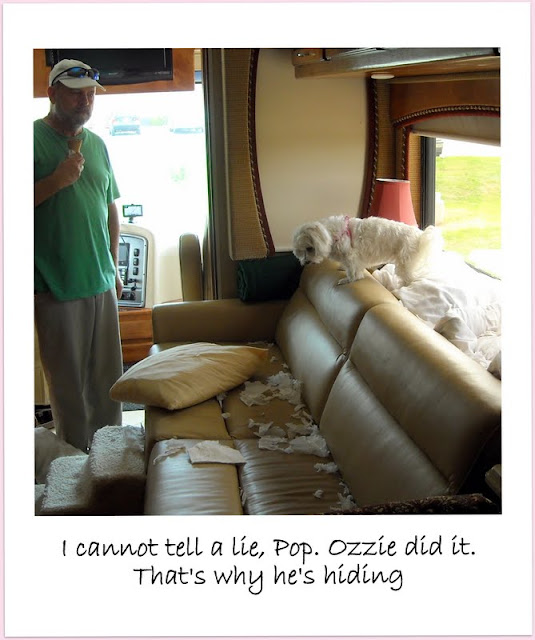 My dear sweet, one-in-a-million husband never looses his cool with me, Lexie or Ozzie.  He simply said, "who did this?" Of course, the Oz-Man was already hiding under the table by this time.

By early afternoon we reached our Norman, Oklahoma destination, Turkey Bay at Lake Thunderbird State Park . It's about 13 miles east of I-35.  The campground has paved interior roads, plenty of trees, concrete pads and lots of empty spaces from which to choose (first come, first serve).  We didn't disconnect the car and found ourselves in one of those tiny circular dead ends with the car at an angle that wouldn't allow disconnect.  The situation quickly deteriorated to the point of requiring Wayne at the wheel of the coach, me at the wheel of the car (still attached) and a good Samaritan coaching us out of the sticky situation.  We were exhausted in the end and appreciated the Camp Host's offer let us park in one of the nice wide handicapped spaces.  Turns out we would have found ourselves in this situation sooner or later as the campground has several of these tight turns. We've been given permission to retreat from the campground going the wrong way on a one-way road.

To add insult to injury, the grounds are covered with tiny burrs that bury themselves in the dogs' paws. They are round and spiky and get twisted all around their hairs.  Uck.  We'll spend one day around the OU campus and then we're outta here!
Email ThisBlogThis!Share to TwitterShare to FacebookShare to Pinterest