Paria Canyon and The Toadstools

From Wahweap Campground on Lake Powell, Page, Arizona    We were near the end of our two week stay at Lake Powell and just couldn't catch a weather break so we must proceed through rain and wind and hail.... well, maybe not hail.

Long before we reached Lake Powell, I saw pictures of Paria Canyon on Amazing Geologist's Facebook page. I swore we'd find Paria Canyon and I looked for it... to no avail. Leave it to my friend Joyce, affectionately called "Ever Ready," to locate it. A gloomy day when Pam, Ernie, Wayne and I were "shut-ins" Joyce and Charlie went exploring... and they found Paria Canyon.

So on Wednesday, April 27th, two days before departing Lake Powell, Pam, Ernie, Joyce, Wayne and I loaded into two vehicles and returned to the place Joyce and Charlie found the day before. Charlie stayed home to rest after a toxic Mexican dinner the previous evening.

What we see today is part of the Grand Staircase-Escalante National Monument. This whole area is cared for by the U.S. Department of the Interior Bureau of Land Management. From Wahweap, we traveled northwest on US 89 into Utah -- through Big Water into the Rimrocks area beyond Cottonwood Road toward Kanab.

Before Paria Canyon though, we made a hiking stop at Toadstools. Distance to the first toadstool is a bit less than a mile from the parking area and is relatively easy. 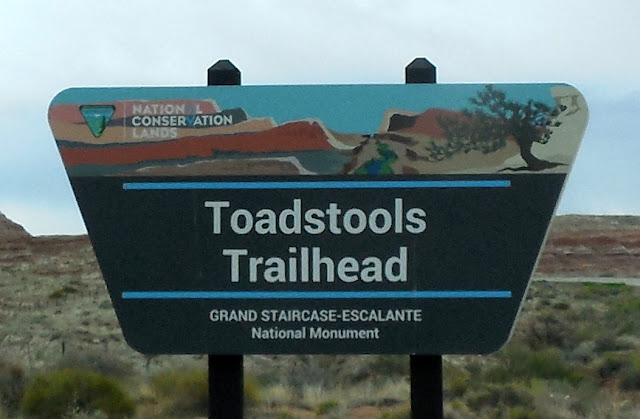 The cliff near the Toadstool parking area gave a glimpse of what was to come. Indeed this is beautiful country. 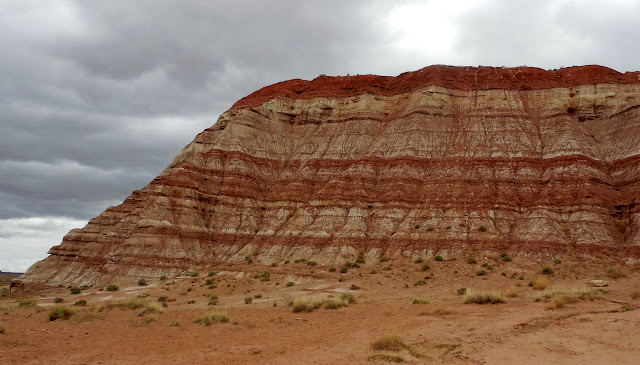 We gathered in front of the Grand Staircase-Escalante National Monument sign for our group snapshot before the hike. I will mostly let pictures tell the story from there.

We reached an area referred to on the sign as a "trail obstacle" -- a narrow path across a ravine of maybe 8 feet deep. In the picture below, Joyce went first (blue jacket) and encouraged us on.  Pam has a height fear and I thought she might turn back but she did not. 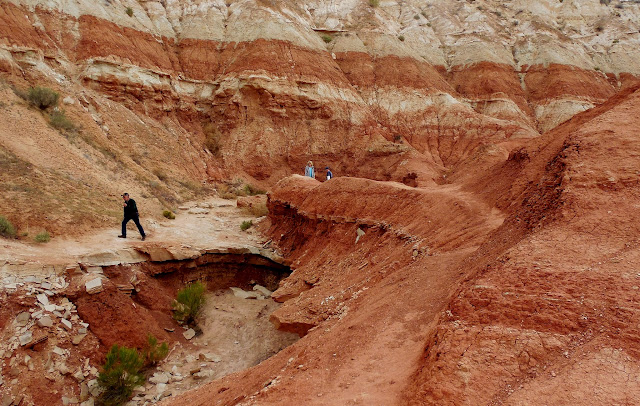 We reached the area of the toadstools and we surely were not disappointed. The smooth slickrock and sandstone made for strange landscape. A few stray raindrops fell but did not hinder our exploration or cause a risk of flood (of which we remained mindful).


It was still well before noon when we finished our Toadstools hike and returned to the parking lot. Lexie and Ozzie took a short pee-pee walk before we headed off to the illusive and colorful Paria Canyon that Joyce is sure she and Charlie found the day prior. 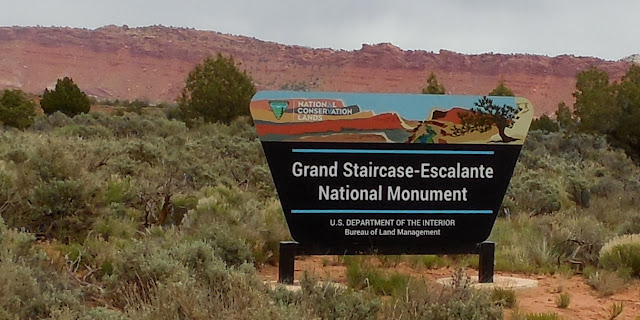 We reached Paria River Valley Road in the two trucks, Joyce, Pam and Ernie in one, us and the dogs in the other.  These are the markers where the road intersects with Highway 89. 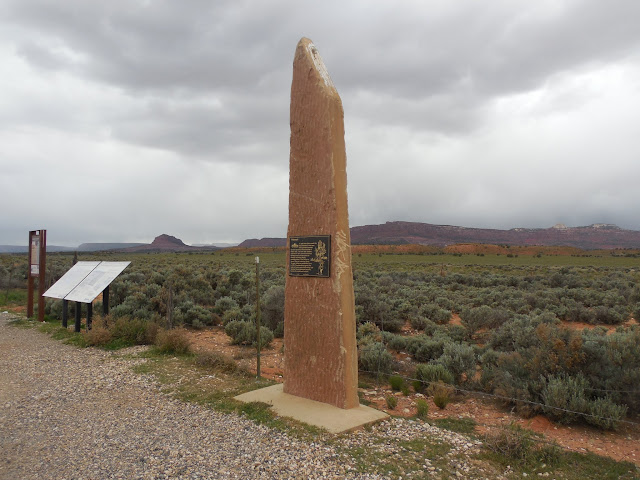 The road decends into a colorful wavy valley. It is breathtakingly beautiful. Wayne stopped the truck and I jumped out for photographs every few dozen yards. 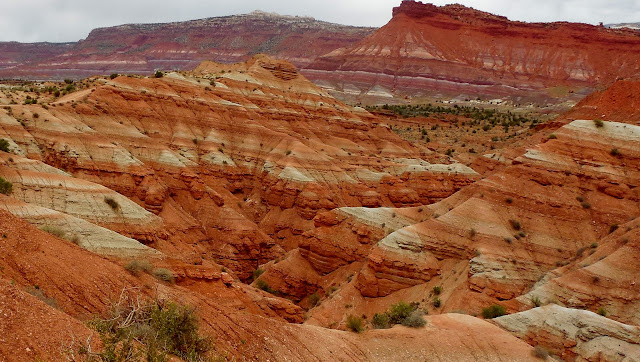 To give perspective to the enormity of Paria Canyon, notice how small Ernie's truck, ahead of us, looks in these pictures. 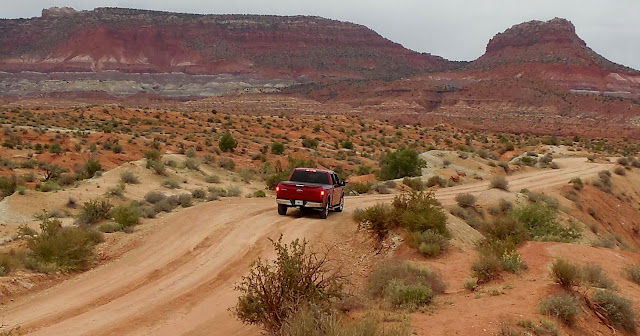 This road was about 6 miles long, and became steep and twisted crossing hills and valleys. The cliffs surrounding us were multi-colored bands -- alternating purple, white, grey, blue and red.

We reached what I believe is the very same section of Paria Mountains I'd seen on Amazing Geologist's Facebook page months earlier.  Surprisingly, the Bureau of Land Management had placed a couple of picnic tables near the base of the mountain. We spread our picnics out but the breeze became so cool, Wayne and I gathered our food and ran back to the truck to finish eating. 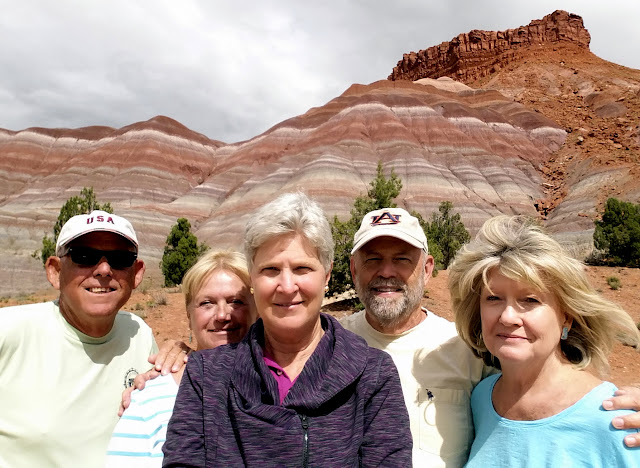 There had been a couple of wooden buildings left from movies (The Outlaw Josey Wales among them) filmed here, but they were burned by vandals a few years ago. Now there's nothing except a small cemetery to show any human has ever inhabited this land. 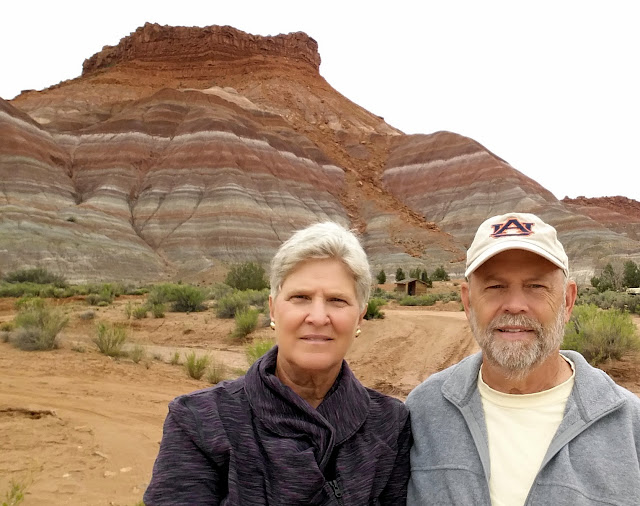 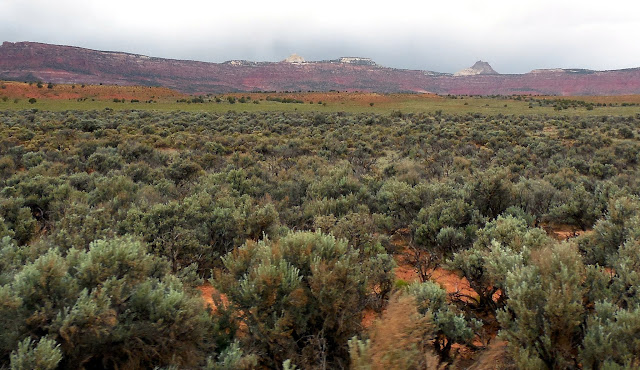 There are many possible hikes starting from this area, including the route to Starlight Canyon, however we did not see the trailhead, nor did we come prepared to take a second hike.

Beginning in 1870, settlers built houses and farmed the land between the crumbly red hills and the water of the Paria River. They worked hard and raised most of what was needed to feed their families.  The town, called Pahreah, thrived and reached 130 inhabitants before the floods of 1883 and 1884 began forcing the families away. By the 1930's only a handful of farm famlies spent only summers in what became the ghost town of Pahreah. 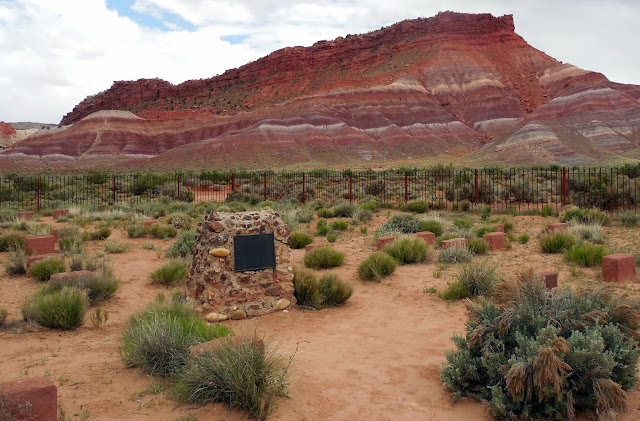 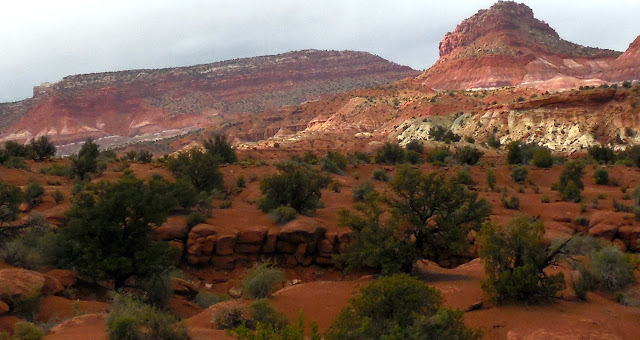 Not many records exist from the Pahreah's heyday. Much of what historians know about these people in this strange land has been recorded from decendants of the pioneers who lived here in the early 1920's.

We took a few minutes to walk among the graves at Pahreah Cemetery. This is a sad and forlorne place. I can't imagine how or why the settlers thought it would be a good place to live. It certainly is beautiful. You can't eat beauty though. 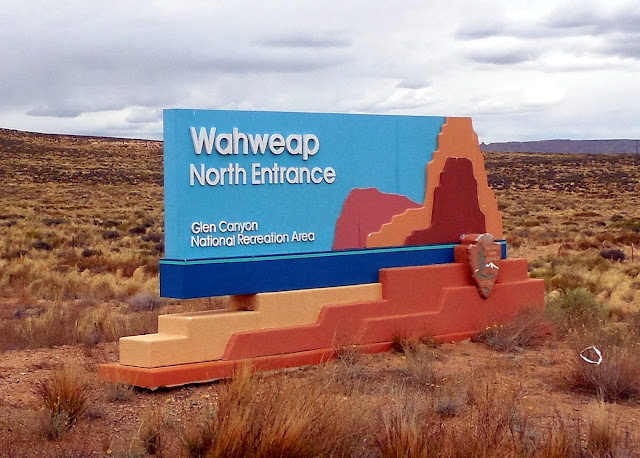 We made our way out of the valley and back to Wahweap, happy to have found Paria Canyon and the history hidden here.  Charlie had mostly recovered from Montezuma's revenge when we returned.
Email ThisBlogThis!Share to TwitterShare to FacebookShare to Pinterest