An Old Bridge For A New City

From Havasu Falls RV Resort, Lake Havasu City, Arizona      London Bridge at Lake Havasu City is second only to the Grand Canyon as Arizona's largest tourist attraction. But what in the world is London Bridge doing here? I set out to learn what I could about the circumstances surrounding this unlikely marriage of Old England and The New World. 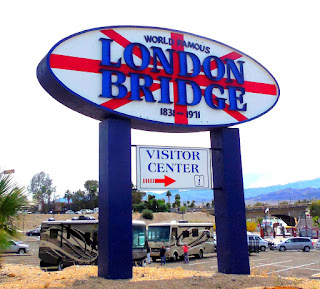 The entrance gate in the picture below was originally made as part of a place called Witley Court in Worchester, England.  The owner's fortune declined though, and the property sold in 1920 and would be resold a few more times before a fire destroyed most everything of Witley Court. The gate was salvaged and through the same weird circumstances as the bridge, it came to Lake Havasu City.

First order of my London Bridge research was to get clear in my mind exactly which bridge we've got here...  Several bridges have been built over the same section of the Thames River after all. The Old London Bridge (think nursery rhyme) dates to 1200 A.D. It has a gruesome history, including the display of severed heads at the gateways, including the that of William Wallace (played so handsomely by Mel Gibson in the movie). This is not that bridge, mind you. Old England still has that one.

This all-granite "New" London Bridge was designed in 1799 and completed in 1831. Once completed, the bridge almost immediately began to sink... at a rate of almost an inch every eight years. By 1924, one side of the bridge was almost four inches lower than the other. Uh oh. The designers didn't know about automobile traffic.

Now to muddy the waters... Four years earlier, in August 1963,  twenty-six square miles of Arizona desert land that would become Lake Havasu City was purchased by a fellow named Robert McCulloch (think chainsaws). He began bringing in prospective land buyers who, upon being wined and dined, snatched up residential lots in the soon-to-be-populated city. Successful in land sales, McCulloch then turned his attention to bringing tourism to the Arizona desert town he'd created -- Lake Havasu. He just needed an attraction... Enter London Bridge sales advertisement. 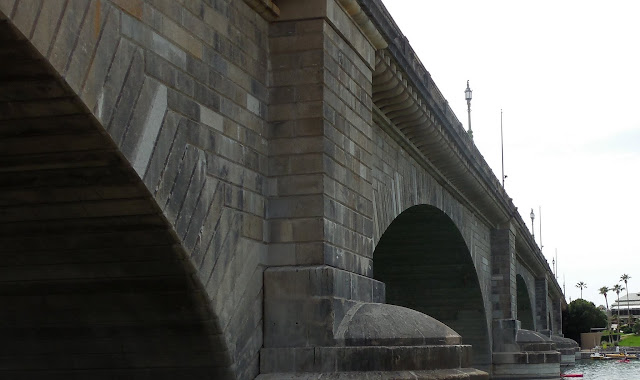 So.... McCullouch bought London Bridge in 1968 for $2,460,000.  How did he arrive at this price? According to the Chamber of Commerce literature, he doubled the anticipated $1.2 million cost of dismantling the bridge and added $1,000 for each year of his age (60) for reassembly when it got to Lake Havasu City.  Seems logical.


So..... 22 million pounds of granite, in 10,276 carefully numbered pieces, was dismantled and shipped, block by block, through the Panama Canal to Long Beach, California. From there it was trucked to Lake Havasu. Re-assembly here took almost three years.

In the end, Mr. McCulloch's total bridge cost reached $5.16 million but his idea worked, as proved by the statistic given in my opening sentence. This proves, once and for all.... "If you build it (or buy and re-assemble it)... they will come."


One thing is certain, London Bridge in Havasu City is a real tourist trap. While the story surrounding the bridge's relocation here is admirable, the area around the bridge is unkempt, dirty and shoddy. It made me think of a good idea that wasn't quite pulled off properly.


I wondered about the London Bridge lampposts. They looked very old but were they part of McCullough's purchase or were they "after market"...?  In fact I learned those very tarnished greenish lampposts are indeed original. In fact they are beyond original as they were forged from the iron of Napoleon Bonaparte's cannons after his defeat.

Armed with the facts (as presented in brochures), I now know all I need, or want to know about this very unlikely arrangement in the desert.
So... Wayne is feeling much better, his cold almost gone completely, we decided to take a boat trip on Lake Havasu.  For a very small price (but I forget exactly how much), we took a narrated pontoon tour to one of the nearby canyons.  The boat tour began and ended at London Bridge. 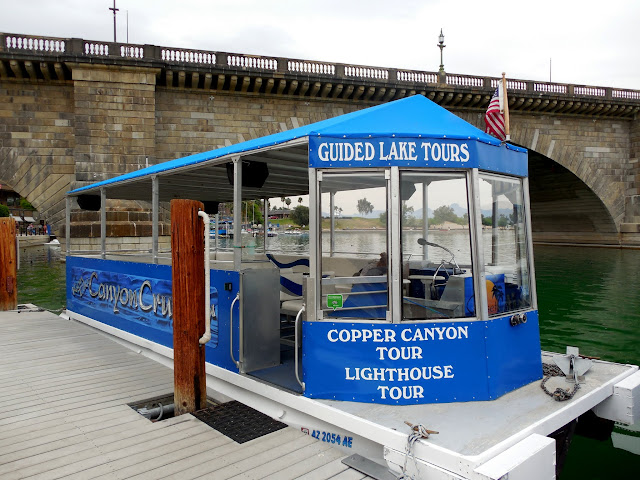 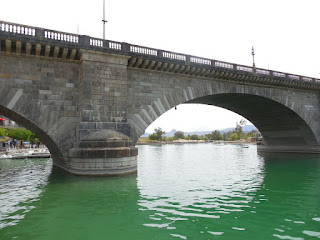 Interesting tidbits from the boat tour included the origin of the name of the lake and city: HAVASU.  Seems the word is Native American for a color that is either blue, green or a mixture of the two... like the the water.

Also, London Bridge, as you might expect, sustained damage from German gunfire in World War II.  Pock marks are easily seen in the granite.  See them in the picture below.

The Canyon Cruise guide (is he a boat captain?) was quite knowledgeable about Lake Havasu City history, the lake and nearby Parker Dam, which is, we learned, the deepest in the world.         *"Deepest" meaning depth of the dam structure into the earth.

Here are some pictures of our destination, Copper Canyon.

The pontoon cruise was well worth whatever price we paid and it wasn't long enough to become boring -- couple of hours, I think.  Adding to our enjoyment, the hot days at had been washed away by rain and left us with really nice days.  The rain was surely welcomed as a seriously out of control wildfire had been burning across lake and north of us. It was completly extinguished by the time we left Lake Havasu City, thank goodness.

As Wayne continued feeling good, we took a day to drive around the city. It seems it to be an inviting playground for water sports. 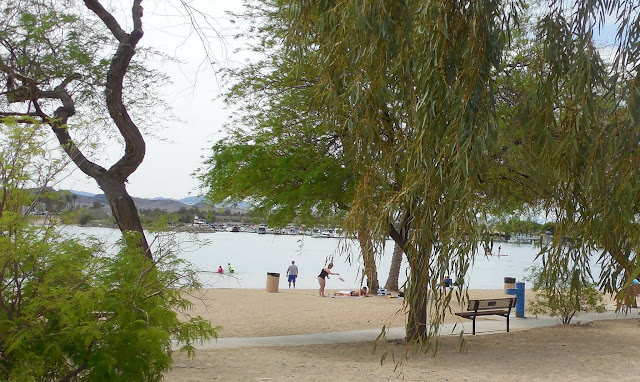 All-in-all, our stay here has been a good one. Not sure I'd jump at the chance to return, but it was okay.

We will soon leave Lake Havasu City to rendezvous with Pam, Ernie, Joyce and Charlie at Camp Verde for a few days before moving on to Lake Powell.
Email ThisBlogThis!Share to TwitterShare to FacebookShare to Pinterest