The Most Vertical City and Montezuma Castle

From Distant Drums RV Resort, Camp Verde, Arizona     On our second day here, we began getting Lexie's Intervertebral Disc Disease (IVDD) pain under control. We are administering steroids, pain pills and sedatives and she's not happy about taking any of it. Despite how careful I am, I always manage to get it into her soft little facial hair around her mouth. It gets sticky and then it hardens. Especially difficult is the pain medication, which, I am told, has a terribly bitter taste. After the first couple doses, we decided it best to dissolve the tiny tablet in warm water, let it cool and squirt it into her mouth -- followed by lots of tasty treats.

This was our last full day at Camp Verde but once again, Wayne and I opted out of making the drive to Sedona with Pam, Ernie, Joyce and Charlie as we couldn't leave Lexie alone and didn't want to take her for too long a ride. Can't afford another setback.

But in the afternoon we developed a plan to rearrange the crew cab of the truck so as to make a large dog pen and we all took a ride. We drove to the town of Jerome, "America's Most Vertical City" located on top of Cleopatra Hill  at 5,246' in elevation. This historic copper mining town was once known as the "wickedest town in the west".

But Jerome has changed it's ways since it's copper mining days of 1880 - 1950. It's now a tourist and artist community. Jerome's overall appearance hasn't changed much though in nearly 100 years, according to the pamphlet I read. Many of the homes and businesses were built after a terrible fire swept through the town in 1894 with another following just five years later.

Jerome sits completely on a 30-degree incline on the mountainside. Gravity has pulled many building down the slope... the jail was among those that slipped away.

Reaching Jerome, we first came upon this historic copper mine headframe, still intact. 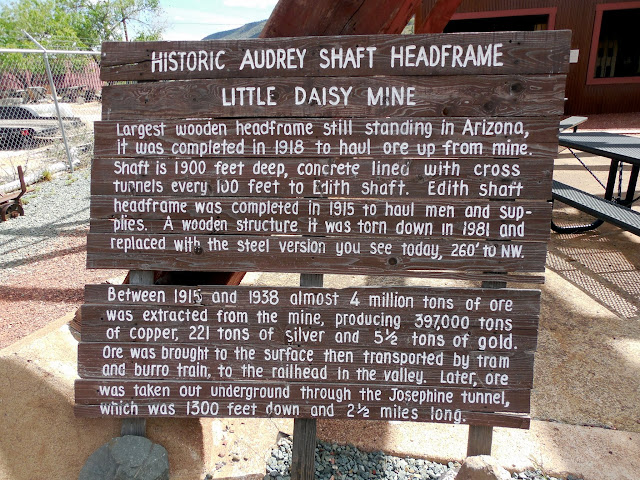 I'm pretty much terrified of heights so when I found myself about to step upon a thick piece of not-so-clear plexiglass, I stopped quick. Looking down, the bottom was nowhere to be seen. About that same time Wayne pointed out this height/depth comparison chart.


The Audrey shaft headframe of the Little Daisy Mine was, for us, the highlight of Jerome. On our best days, we're not really inclined to do typically touristy shopping and that's basically what Jerome is all about. I did snap a couple of pictures of things that interested me.


Leaving Jerome and heading back to Camp Verde, we stopped in at Montezuma Castle. The name is misleading: Montezuma Castle is neither Aztec nor is it a castle. This is a five story, 20-room dwelling built sometime between 1100 and 1300. It's in the recess of a cliff some 100 feet above the valley.  For years, Montezuma Castle was accessible to anyone willing to climb up the cliff wall. Extensive damage was done to the dwelling by vandals and so, in 1959, it was closed to the public.


We spent about an hour at Montezuma Castle, mostly because the area had a nice concrete walkway where we could take Lexie and Ozzie in the stroller. The castle in the cliff on one side and a small river on the other side.  It made for a pleasant afternoon.

Next morning we said our goodbyes to Sherry and Dave who we hope to see again at Lake Powell. Pam and Ernie are headed directly to Lake Powell today. Joyce and Charlie are going to Tuba City in hopes of weather good enough to see the Grand Canyon.

Wayne and I will join Joyce and Charlie in Tuba City but must stop in Flagstaff to have new tires put on Endie.  It's time to bite the bullet.
Email ThisBlogThis!Share to TwitterShare to FacebookShare to Pinterest