We left Wahweap on Saturday, April 30th -- on a third consecutive day of rain.  I can count the number of warm sunny days we had there on one hand. Wind, rain and cold temperatures have been torturous. I am more than ready to move on in hopes of finding sunshine if not warm weather.

Pam, Ernie, Joyce and Charlie pulled out today too -- all headed to Zion and Bryce Canyon National Parks. We will reconvene at Moab to visit Arches and Canyonlands National Parks. Maybe we will get to rendezvous with Penny and Bob too, a couple we met in Chula Vista.

Today's destination for Wayne and me is Goulding's Camp Park at Monument Valley.  It's a mere 71 miles west of Page, Arizona, as the crow flies. That converts to 135 highway miles. 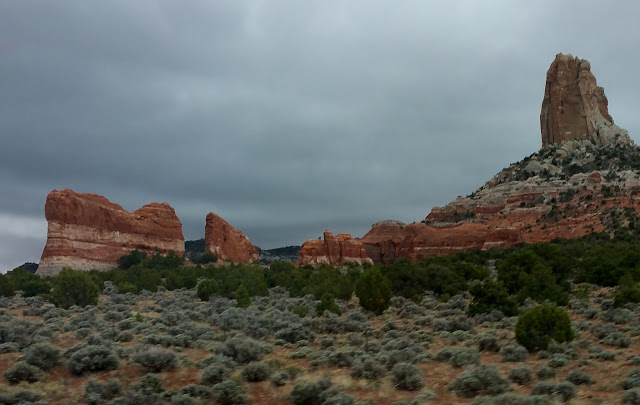 While the scenery was delightful, the weather worsened as we traveled and somewhere along the road, hail and snow were added to the already miserable travel conditions. By the time we reached Kayente, Arizona, the ground was slushy white and we had passed two traffic accidents.


Goulding's Camp Park Campground is in a box canyon on a hill. It's a small place -- just 62 sites on red, sandy earth. No grass... no gravel. The afternoon of our arrival, the ground was simply "red mud". Getting into our assigned campsite proved difficult as the campground's interior roads are narrow and lined with young trees. After a few harrowing minutes navigating Big Endie through the maze, Wayne backed her into a vacant space and set about getting site reassignment. Fortunately for us, the rain cooperated, taking a break while we got settled.

We finished setting up with a little daylight to spare so we visited Goulding's museum and the tiny building referred to here as "The John Wayne Cabin". The building was, in it's former life, a potato cellar of the homeowners, the Gouldings.

Getting this stop out of the way, we will have all day tomorrow to tour Monument Valley. With rain forecast for several more days we won't be able to take the campground's red mud for more than the shortest of time.


An abbreviated history of Goulding's


Harry Goulding (a sheep trader from Colorado) and his wife, Leone, nicknamed "Mike" came to Monument Valley in 1920. They bought this property when the Paiute Indian Reservation relocated and the land was put on the market for sale. For several years the Gouldings lived in tents while operating a trading post. The Navajo people traded hand crafted items for food and dry goods.

During the Great Depression of the 1930's the Navajo people suffered. Harry Goulding began an effort to bring movie production into Monument Valley.  He discussed a plan with Navajo friends who were eager to work in the movies for wages. With their last $60, Harry and Mike drove to Hollywood carrying a fist-full of Monument Valley photographs. They were successful in meeting John Ford and they ultimately left Hollywood with an agreement for filming. Within days, John Ford, along with his crew, arrived and began filming "Stagecoach" starring John Wayne.

It's a place Wayne and I have had on our "must see" list for a very long time.  Only the weather stands in our way now.... and the miserable desert rain continued all night and into the next morning as we drove to the Navajo Tribal Park to take a driving tour of Monument Valley. Clouds hung heavy over the cliffs so we toured the Visitor Center, the Navajo museum and then the gift shop while the skies cleared.

Finally, just before noon, the low hanging clouds began lifting.  Looking down from the visitors center we could see the dirt (or mud today) road that will take us along the 17-mile Valley Drive loop. We are told to watch for small signs to identify each of the great monoliths. With Lexie and Ozzie snuggled warmly in the back seat, we set out on the long awaited journey.


Finally all the clouds lifted to reveal the most beautiful bright red towering spires and buttes I'd ever seen. The road was muddy and full of potholes... and they got worse as we went along but we didn't care.  Here's some of the best of what we saw...


Monument names are based on imagination and description. They were given by early settlers and sometimes have a significant meaning to the Navajo people.

We stopped at the overlook of John Ford Point...

Monument Valley was created from erosion, dating back 570 million years (who decides this stuff?). Then some 65 million years ago, the Colorado Plateau began an "uplift" and a long process of earth shifting that resulted in the initial rocks formations that are the base of what is here today. Hummm. Probably too much information.


We stayed about an hour at John Ford's Point where we ate our lunch and met a nice couple who took these photos of us. Thus far, we've covered only about 1/3 of the Valley Drive. From here, we pass the large Rain God Mesa (to the left in the picture below) that marks the geographical center of Monument Valley. Behind this huge formation, a natural aquifer streaks the base of the sandstone formation.

Rock Types at Monument Valley are:


Valley Drive offered us an overlook at a place called "Artist Point" -- easy to see why it has that name.  Here, we are looking back toward Goulding's as the clouds along with a hearty wind come rolling in again.

The next picture is shot through what's called "North Window" with a view of the lower valley. On the left is the back side of Elephant Butte. Cly Butte, on the right is named for a beloved Navajo Medicine Man who is buried at the base of the formation.

As the clouds became darker, we hurried through the final quarter of Valley Drive. Fortunately, this was where the loop returned to the main road.  I snapped dozens more pictures... 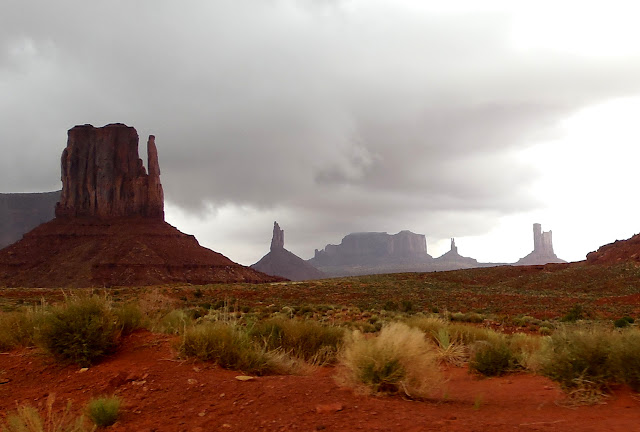 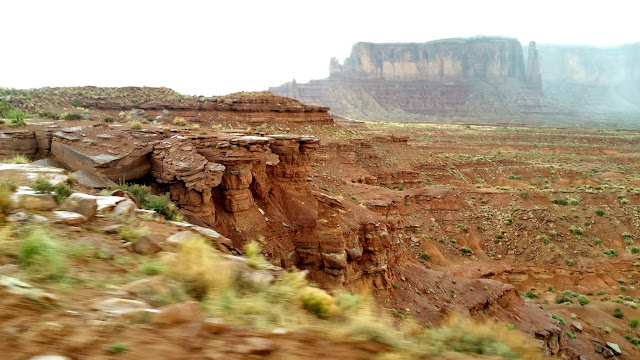 The skies opened as we drove out of Monument Valley and the rain continued nearly all night. Next morning we awoke to sunny, bright blue skies in time to leave the area. 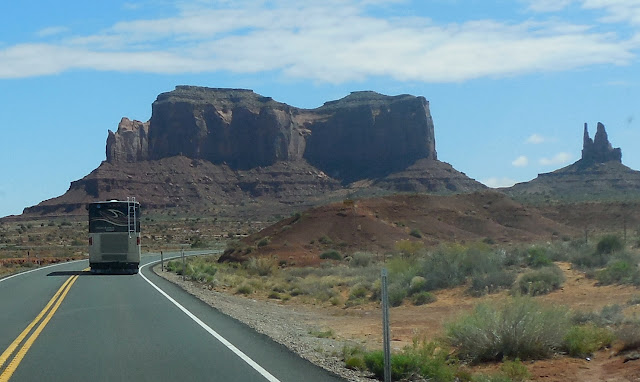 Leaving Monument Valley, I drove the truck, following Wayne in Endie, so I could stop for a few more pictures of this magnificent place.  Here are a couple of them -- one might be familiar.... 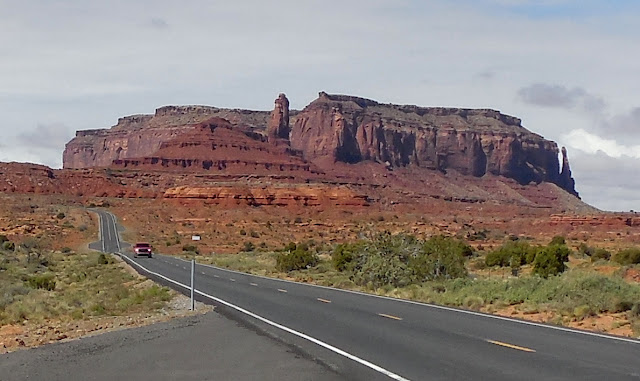 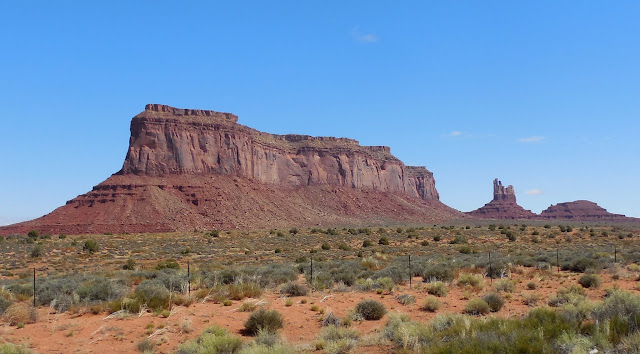 Below is the one that might be familiar. You remember....

Despite the weather, we loved our day visit of Monument Valley. It's no wonder the actor, John Wayne, called this place "God's Treasure"