From Distant Drums RV Resort, Camp Verde, Arizona   It's been over four months since friends Joyce and Charlie left our "Hell's Half Dozen" leaving us as a mere  "Fab Four" and it's no secret we've missed having them travel with us. They had fun during the holiday season with friends and family at home in Kansas though.

Wayne and I missed Pam and Ernie during our week-plus stay at Lake Havasu City too.  In Quartzsite, Ernie won a free week-long stay at The Palms RV Resort so they took advantage of the warm stop in Yuma  on their way east from Chula Vista.

Our plan was that we six would rendezvous today at Distant Drums RV Park in Camp Verde, but we had no idea that all of us would pull in at exactly the same time!  What a great surprise!

Within a few minutes the three rigs were set up and we were all together again.

The campground is nice and our sites face outward into the desert and the setting sun.

The weather is cooperative too, giving us just the right temperature to sit out until dusk.

Right away, we met our neighbors, who pulled in at the same time as all of us. Dave and Sherry are from near Wasilla, Alaska. Yes, they've met Sarah, but no, they don't know her intimately.

Thrilled to fold another couple into our group, we all planned to meet for breakfast next morning at a local eatery, Verde Cafe, where we shared stories and exchanged travel plans. While the four of us are headed to Lake Powell, Sherry and Dave are going another direction.  With a little tweaking and a touch of luck, we hope to be together with them again at Lake Powell.

The immediate plan for "Hell's Half Dozen" had been to visit Sedona and the surrounding area for a couple of days, but an unplanned emergency, in the form of a relapse of Lexie's back pain, came into the picture. After dark that first evening, she stayed away from us (more than usual) and wouldn't allow us to touch her. Overnight, she seemed unable to rest and kept her head up, panting nearly all night. We knew a trip to the local veterinarian was in store for us.

I called Montezuma Veterinary Services -- just down the road from the campground on our way to breakfast the next morning and was given a 4:15 appointment time. We left Lexie and Ozzie in the coach while we ate. Upon our return, Lexie's pain seemed worse. I called the vet office again to give notice that we would be coming earlier. A stream of emergencies had come into their office and they couldn't guarantee we'd get her seen sooner, but we would be there in case we could get in earlier.

Lexie appears to have Intervertebral Disc Disease. She was given a longer prescription of steroids to heal the injury again. Upon advise of the vet, the little foam steps she used to go to and from the sofa have been reduced to two small foam beds and she is now an official "floor" dog. 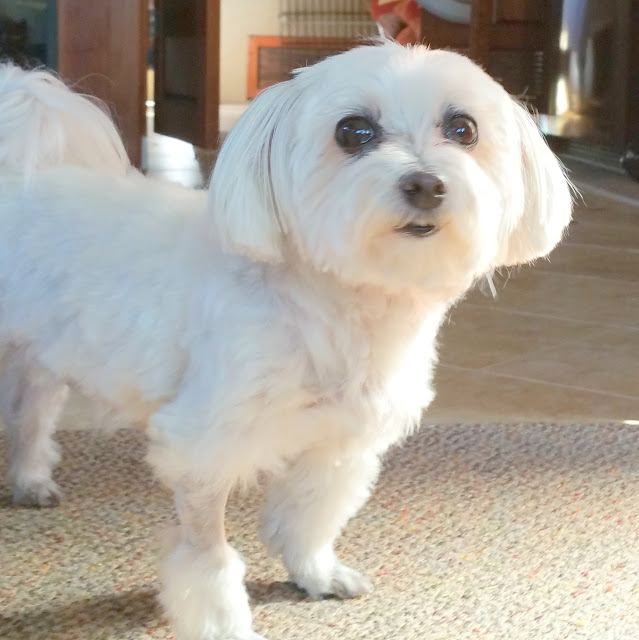 As for our plan to see Sedona today, it's okay... we've been there once already and didn't mind missing it, though we did miss being with Joyce, Charlie, Pam and Ernie who had a great day.
Email ThisBlogThis!Share to TwitterShare to FacebookShare to Pinterest