Northward bound still, our next stop is Sault Ste. Marie in Michigan's Eastern Upper Peninsula. This travel day was rainy, breezy and downright chilly. With a few miles to go today, we stopped for lunch and puppy pee-pee at one of the final rest areas on I-75 before reaching our destination.

When we decided to make Soo Locks Campground our destination for this area, I simply had to find out more about the strange pronunciation of the a word spelled s-a-u-l-t.  Though I am of French heritage, I don't speak French and therefore, didn't know that "Soo" is simply the English pronunciation of "Sault". Now I know. And that's not to be confused with the American Indian "Sioux" ... also pronounced "Soo".  Thanks to the internet. You know they can't put it on the internet if it's not true.

Michigan's Upper Peninsula is very much like Canada.  We're finding this area to be more rugged and rural than the lush green, well-groomed areas on the Lake Michigan coast we left last week.  Moreover, today's overcast skies, dense fog and the industrial "look" of Sault Ste. Marie also reminds us of many places we've visited in Canada. We love it.

Reaching Sault Ste. Marie, one of the first buildings to catch our attention was the fabulous Cloverland Electrical Cooperative Hydroelectric Plant.  It is gargantuan at 1/4 mile in length. Construction began in 1898 and was completed in 1902. Cloverland was, at that time, the second largest hydro facility ever built, second only to Niagara Falls.

The same afternoon we arrived at Soo Locks Campground, after setting up camp, we had to take in the Soo Locks as these kind of operations are simply irresistible to either of us.

A couple of Soo Lock factoids:


The St. Marys River is 63 miles long and drops 21 feet from Lake Superior to Lakes Huron and Michigan. Most of this drop occurs at the St. Marys Rapids.  It's the only water connection between Lake Superior and the other Great Lakes.

The Ojibway (Chippewa) Indians who lived here long ago, carried their canoes around the rapids to reach Lake Superior from the St. Marys River.

The Corps of Engineers welcomes visitors to Soo Locks and have built a fabulous viewing stand from which we could easily watch the freighters move into place in the locks, drop (or raise) to the necessary level and then move on through.  It was a great process to watch.


The Soo Locks Visitors Center posts a schedule of freighters scheduled to arrive for processing through the locks. Right on time, the Cason J Callaway made its way through Poe Lock. 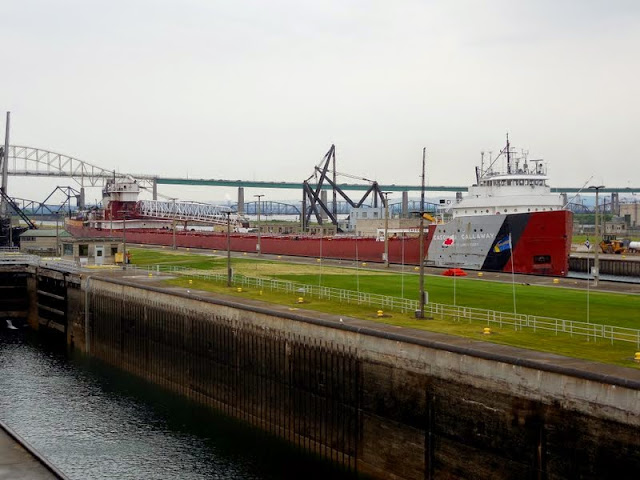 The International Bridge and Railroad Bridge are just upstream from Soo Locks. They provide passage into Canada from the U.S.  The vehicle traffic lines were long coming south from Canada.
Inside the Soo Locks Visitors Center, we found a treasure trove of information about the Great Lakes, freighters, history of the area and engineering feats that resulted in the Soo Locks being built.

I've finally re-learned all the names of the Great Lakes and their respective positions.  I'm sure this was previously memorized somewhere in grammar school, but was long forgotten.  Funny how this knowledge seems so valuable to me as I grow older. 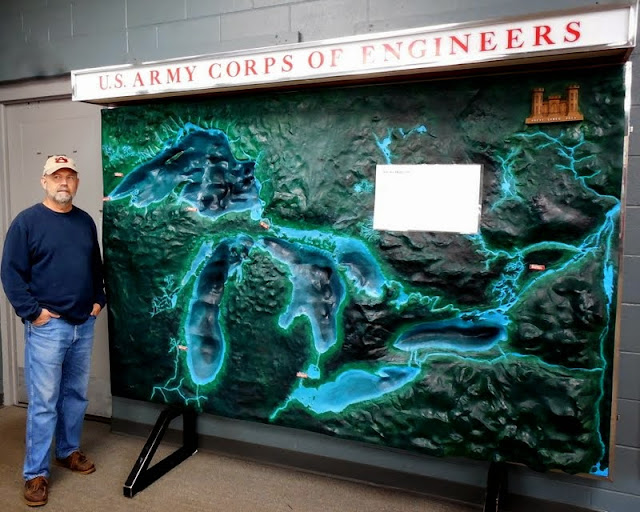 Because I've become so captivated by shipping and the Great Lakes, we simply had to tour the Valley Camp Freighter Museum in Sault Ste. Marie.

The Valley Camp was built in 1917 for the Producers Steamship Company.  It was first named Louis W. Hill. It changed names and hands several times. In 1957, it's final sale was to Republic Steel Corporation. From 1917 until it's last voyage in 1966, the 11,500 ton ship logged some 3 million miles and carried in excess of 16 million tons of cargo. It's 550 feet long with a beam of 58 feet and a depth of 31 feet.  The Valley Camp carried a crew of 32.


The Wreck of The Edmund Fitzgerald

Maybe it's because I liked, and was quite moved by the Gordon Lightfoot song. Or maybe I gave too much though about the loss of the Edmund Fitzgerald, her captain and crew in a storm. It could be that I have a certain fear of sinking ships. Whatever the reason, the Edmund Fitzgerald display inside the Valley Camp Freighter Museum was especially moving.

Wreck Of The Edmund Fitzgerald

Music and lyrics ©1976 by Gordon Lightfoot

The legend lives on from the Chippewa on down
of the big lake they called "Gitche Gumee."
The lake, it is said, never gives up her dead
when the skies of November turn gloomy.
With a load of iron ore twenty-six thousand
tons more than the Edmund Fitzgerald weighed empty,
that good ship and true was a bone to be chewed
when the "Gales of November" came early.

The ship was the pride of the American side
coming back from some mill in Wisconsin.
As the big freighters go, it was bigger than most
with a crew and good captain well seasoned,
concluding some terms with a couple of steel firms
when they left fully loaded for Cleveland.

And later that night when the ship's bell rang,
could it be the north wind they'd been feelin'?
The wind in the wires made a tattle-tale sound
and a wave broke over the railing.
And ev'ry man knew, as the captain did too
'twas the witch of November come stealin'.

The dawn came late and the breakfast had to wait
when the Gales of November came slashin'.
When afternoon came it was freezin' rain
in the face of a hurricane west wind.
When suppertime came the old cook came on deck sayin'.
"Fellas, it's too rough t'feed ya."

At seven P.M. a main hatchway caved in;
he said,"Fellas, it's bin good t'know ya!"
The captain wired in he had water comin' in
and the good ship and crew was in peril.
And later that night when 'is lights went outta sight
came the wreck of the Edmund Fitzgerald.

Does any one know where the love of God goes
when the waves turn the minutes to hours?
The searchers all say they'd have made Whitefish Bay
if they'd put fifteen more miles behind 'er.
They might have split up or they might have capsized;
they may have broke deep and took water.
And all that remains is the faces and the names
of the wives and the sons and the daughters.

Lake Huron rolls, Superior sings
in the rooms of her ice-water mansion.
Old Michigan steams like a young man's dreams;
the islands and bays are for sportsmen.
And farther below Lake Ontario
takes in what Lake Erie can send her,
And the iron boats go as the mariners all know
with the Gales of November remembered.

In a musty old hall in Detroit they prayed,
in the "Maritime Sailors' Cathedral."
The church bell chimed 'til it rang twenty-nine times
for each man on the Edmund Fitzgerald.

The legend lives on from the Chippewa on down
of the big lake they call "Gitche Gumee."
"Superior," they said, "never gives up her dead
when the gales of November come early!"
Email ThisBlogThis!Share to TwitterShare to FacebookShare to Pinterest