The time came to continue travel up the little finger side of Michigan's mitten and we were blessed with some great weather for it.  Our travel today was mostly along US 31 and luckily, around lunchtime, we came upon Friske Orchards at Ellsworth.  It's asparagus season in this region and there have been plenty roadside stands but none that would accommodate the huge rig. Friske's has a great parking area in the rear, lots of grass -- good for walking dogs and just taking a break. 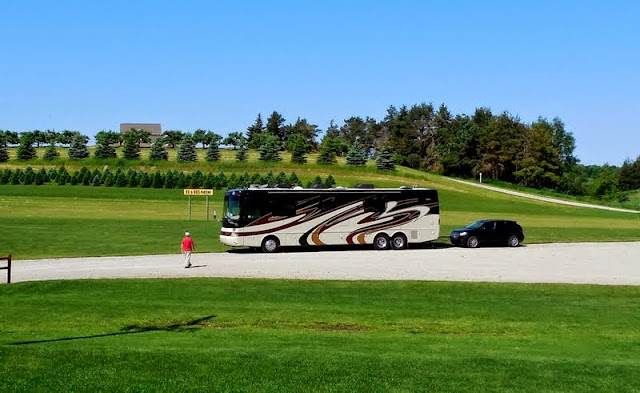 Inside Friske's Orchard store we bought cherry jams, fresh asparagus, cream of asparagus soup, cherry candy and fresh baked cookies.  The soup and cookies were lunch.  Oh how good it was!  After about an hour, we pulled out again to continue today's journey.

I've been looking forward to see another of the Great Lakes and as we finally reached the Strait of Mackinac, I got my chance. Lake Huron is on one side, Lake Michigan is on the other.

And what a beautiful bridge! Mackinac Bridge, like most bridges, is probably always in process of being painted. As we crossed, traffic was reduced to a single lane.  Not enjoyable for someone like me who has a phobia about high bridges. It was thrilling nevertheless.

Just across the bridge, a lovely "Bridgeview Park" offers spectacular afternoon views of the bridge and honors the building of it.  It was completed in November 1957, is known as "Mighty Mac" and is the world's third longest suspension bridge.  Surprisingly the bridge was envisioned as early as the 1880's.  It is Michigan's #1 Civil Engineering Project of the 20th century. Four workers died in it's construction.

And So We Reached the UP (and became Yoopers)...

"Yooper" is a common term for residents of the Upper Penisula of Michigan. It is derived from the initials U.P. which is pronounced you-pee. U.P. stands for Upper Peninsula, as opposed to the lower peninsula of Michigan

St Ignace is where we are based for exploration of the area here on the southern fringe of the upper peninsula. Temperatures are noticeably cooler there than where we've been. Unseasonably so, we're told.

These names were familiar from high school American history, but I had to read to refresh my memory:  In a nutshell...

Marquette and Joliet found and explored the Mississippi River in the 1670's. They were the first Europeans to do so.

Fr. Jacques Marquette was a Catholic missionary and explorer. He was born in France. Sometime around 1669 to 1671, he met Louis Joliet, a French-Canadian trader and explorer born near Québec City.

Father Marquette preached among the Illinois Indians until his death in 1675. The location of his remains was forgotten, then found again. He was finally reburied here in St. Ignace.

Wayne got himself all engrossed in the Marquette and Joliet exploration and then, of course, we visited the grave of the Fr. Marquette.

Another day we went back across the bridge to Mackinaw City and explored an American Revolutionary War site along the waterfront.  Fort Michilimackinac was built by the French in 1714-1715 to control the fur trade and European development of the upper Great Lakes.

The photo below was also taken at Fort Michilimackinack State Park. It's a nice area with exceptional views of Mackinac Bridge with a sandy beach, the lighthouse and park with picnic area.
Since we arrived in the Mackinac Strait area, we've been seeing sighs for PASTIES.  Not pastries, mind you. We didn't know what they were so we stopped in at this nice little pastie shop in Mackinaw City and ordered up!


Wayne hates rutabaga but he sat in the car while I went in to learn about and then order our pasties. Turns out the pasties are made with onion potato and the dreaded rutabaga! Only the meat was optional. I chose ground beef with a side of beef gravy.  I didn't mention to Wayne that he would be eating rutabaga.
Once he had raved about the pastie and when most of it had already been eaten, I told Wayne about the rutabaga.  He's changed his mind about rutabaga.  It was fabulous.  Later, while talking about pasties with some of the locals, I learned they aren't hard to make.  Sometime when I'm in a rare cooking mood, I'll give it a whirl.

Another attraction in Mackinaw City is the United States Coast Guard Cutter Mackinaw docked there. It's a 290' ship decommissioned in 2006 and now serves as a Maritime Museum. We didn't go aboard although the idea of it's work is fascinating. It made a nice photo too, I thought.

We'll be heading north from here... making our way to Sault Ste. Marie to see if we can find out how "SAULT" became pronounced "SOO"....   Hope you'll travel along with us.