We're in Munising on the northwestern coast of the Upper Peninsula of Michigan staying at a municipal campground on the South Bay of Lake Superior.

Munising became our destination so we could see Pictured Rocks National Lakeshore. It was named the country's first National Lakeshore in 1966 during the Lyndon B. Johnson administration.  This area has over a hundred miles of hiking trails, dozens of waterfalls, beautiful rock formations, sandy beaches and at least one shipwreck that can be seen from the water's surface.

The weather here has been warm and humid. The mosquitoes here are healthy and plentiful. The flies are also pretty hearty. We avoid being outside at dawn and dusk and we've made a sport of eradicating the little buggers from the coach every night before bedtime. Otherwise, we awake to a buzzzzzz in our ears. I've smacked my ears 'till they hurt.

The first afternoon here we met a nice couple in a campsite across from us.  He's John and she's Jerilyn. They're from somewhere in the palm of Michigan's mitten. John and Jerilyn have a sweet little girl named Maggie who is a little larger than Lexie, about Ozzie's size, but I'm not sure what breed.  Maggie is a show stopper with cute antics and tons of personality.

Along about the third day here, we learned about a nearby pontoon boat rental business. The prices were reasonable. We decided to invite John and Jerilyn to join us for a half-day excursion, taking all three dogs along; something we can never do when we take a public boat tour.  Happily, they agreed and we planned to leave the dock around 1 p.m. the next day.

John and Jerilyn were easy to like, relaxed and nearing retirement. Wayne and I did our best to convert them to retirement as full-time RV'ers and think we might have gotten them to think about it, at least. It's always such fun to rendezvous with other RV'ers and we would surely like to team up with them again.

The Pictured Rocks stretch for about 15 miles along Lake Superior from Sand Point on the west to just after Spray Falls on the east. They are spectacular!
The name "Pictured Rocks" comes from the streaks of mineral stain that decorate the face of the weather-sculpted cliffs. Sandstone cliffs of ochre, tan, and brown - sandwiched with layers of white, green, orange, and black - glisten against the cloud-streaked sky and clear waters of Lake Superior.

The wild beauty of Pictured Rocks includes sandstone cliffs, beaches, sand dunes, waterfalls, lakes, forest, and shoreline. All this beckoned us to visit the Pictured Rocks.

Colorful and bold, the Pictured Rocks tower 50 to 200 feet directly up from Lake Superior.  Sometimes, a photograph just can't capture the majesty of such places.  Take a look at how tiny the boat looks in the photograph below.

Pictured Rocks Lakeshore hugs the Lake Superior shoreline for more than 40 miles. Our outing barely made a dent in it. 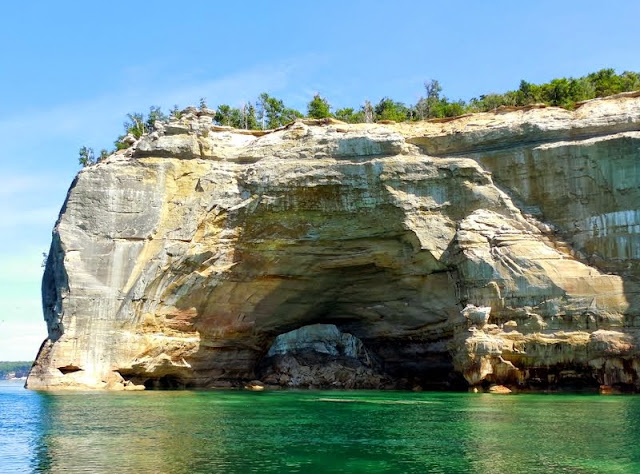 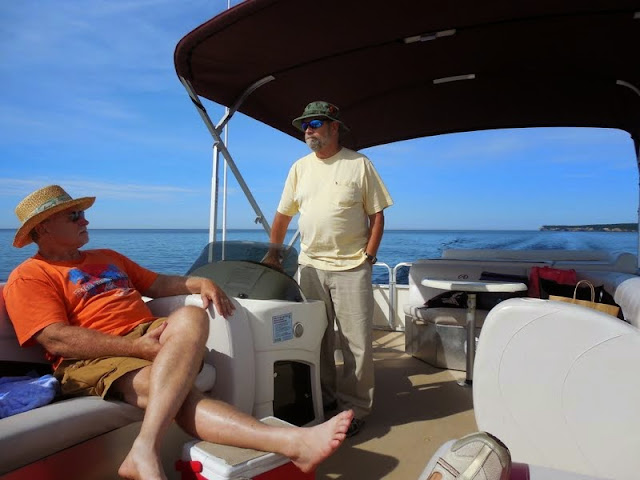 The sun was warm but the air was cool enough that being in the shade made a sweatshirt necessary.  I don't think we could have ordered a better weather day.

The day was memorable and perfect in every way.  Turns out it would be the last pretty afternoon for awhile.  Next day, late in the afternoon, an enormous black cloud and fierce wind came up, followed by rain. Two more days of rain, dense and frequent fog banks and plummeting temperatures came along too.

We'll be pushing on soon -- continuing westward and then north through the U.P.  Come on along.
Email ThisBlogThis!Share to TwitterShare to FacebookShare to Pinterest