Anybody who knows Wayne knows he likes military history. Anytime we're near anything military, we soak up some of it's past.  Our visit to Muskegon today took us to two docking locations: USS LST 393 and USS Silversides.

The USS LST 393 Veterans Museum and tours of the ship are in their eighth year of operation and are open seven days a week during the summer season.  For all the details, check out the website at http://www.lst393.org/.  The ship is at Mart Dock, on the Muskegon Lake waterfront, just off Shoreline Drive in the heart of downtown Muskegon.

From there we made our way to the docking location of the USS Silversides in the Beachwood-Bluffton area. This is at the Milwaukee-Muskegon Channel. The sun was bright, the sky was clear and the breeze was pretty stiff causing the wind chill to be near the point of being uncomfortable.  It was downright cold to me.

That's a torpedo tube at the bottom left of the photo above.  It's 23 foot long and likely came from the aft torpedo room of the USS Barbaro SS 317. It is made of bronze to resist salt water corrosion.

The device in the photo below is a Hedgehog, one of just a handful on display in the whole world. It is an "anti-submarine" weapon. The Hedgehog was first developed by the British Royal Navy and was improved upon by the US Navy. This weapon caused much more damage to submarines (a 25% damage rate) than the old "depth charges" that had a damage rate of just 7%.

Here's another unusual display: a submarine rescue chamber. It is dropped into the sea from the surface ship and attaches to the submarine's escape hatch. Interestingly enough, a chamber like this one rescued the crew of 33 from the USS Squalus off the coast of New Hampshire in 1939. One of the men rescued that day would become the final skipper of the USS Silversides.

The USCSC Mclane, a prohibition era Coast Guard Cutter is docked behind the USS Silversides at this location.  It's part of the ship tour at this location too.  I didn't get a good shot of it though.

But the USS Silversides is the main attraction. Commissioned just a few days after the attack on Pearl Harbor, Silversides completed 14 combat war patrols in the Pacific Theater of Operations during World War II. Silversides is officially credited with sinking 23 major Japanese ships (the third highest total for any U.S. Navy Submarine) for an approximate tonnage of 90,080. Silversides received four Presidential Unit Citations and 12 Battle Stars for her wartime service.

Decommissioned from active service in 1946, Silversides was moved to Chicago where it was utilized by the U.S. Navy Reserve until 1969. Moving to Muskegon, Michigan in 1987, Silversides has been painstakingly maintained in its World War II configuration.
﻿﻿

Leaving the USS Silversides Submarine Museum, we drove along the 2.5 mile sandy Pere Marquette Beach and saw the lighthouse by the same name.


We took a different route back to Trailways Campground in Montague and happened to pass the spectacularly gargantuan "Michigan Adventure" amusement park.  It has, without a doubt, the largest string of roller coaster I can ever remember seeing.  I forgot to take a picture -- we came upon it without warning. 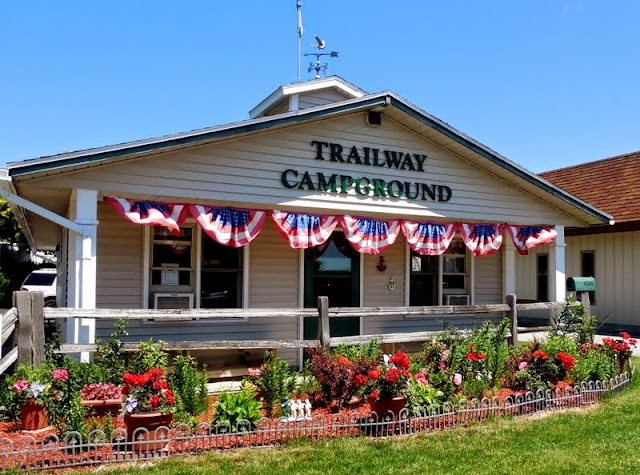 Tomorrow morning, we'll be "shipping out" -- leaving this pleasant lakefront town and campground.  I managed to miss fresh asparagus at the local farmers market on both Wednesday and Saturday.  Drat. Maybe the next stop.
Email ThisBlogThis!Share to TwitterShare to FacebookShare to Pinterest