Smitten By The Mitten

We were in Tennessee a total of eighteen days. The twin grand babies were born before we even arrived -- they came home from the hospital in three days and then returned for five more days to  stabilize their weight and body temperature. Finally they came home to begin life in the loving care of their new mom and dad.

We had nice visits with Wayne's sons and a chance to spend some time with one of the older grandchildren for a three day visit at the campground. This was our first overnight company in Endie. I must say the inflatable mattress on the sofa sleeper makes a better one that the old style. For a few days, we also "dog sat" the sweet little poodle girl who waited patiently for her parents and new twins to come home.

My brother brought in the grand finale of our visit with an electro cardioversion to get his heart back into rhythm. While the procedure name sounds scary, it was actually done on an outpatient basis and he only had to remove his shirt. He was home by lunchtime.

But the weather was sweltering hot in Tennessee and we were ready to leave the next morning.  We will go back along the very same route we took coming here from the Holiday Rambler Maintenance Session in Goshen, Indiana. From Nashville we went through Louisville, Kentucky and straight back through Indiana on I-65.

The tentative plan to visit Alaska this summer were canceled a while back and the idea of exploring Newfoundland never really got off the ground. The new plan is to visit the land who's motto is "Si quaeris peninsulam amoenam, circumspice" which translates to "if you seek a pleasant peninsula, look about you".

The single night we spent the road going north was about 30 miles south of Indianapolis in Edinburg, Indiana.  A small grassy oasis called Driftwood Camp provided a relaxing evening.  Next morning we hit the road again to find ourselves on some of the worst highway conditions of our three year full-time travel.  The photo below was taken on I-65 somewhere in Indiana.  There were miles and miles and miles of this shameful condition.  Everything in the coach shook but luckily, nothing broke. At least nothing we've found at the time of this post writing.

﻿
By early afternoon we reached Van Buren State Park in South Haven, Indiana. This is located about where the very bottom of the little finger would be in the "mitten".  We had made a call and were assured our 43' coach would fit easily into several campsites here.  Liking what we heard we went on in.  The plan is to stay for 3-4 days. Van Buren State Park Campground is a short 1/4 mile walk from the shore of Lake Michigan too! Can't wait.

After what seemed to be an eternity at check-in paying a-la-carte for the campsite, daily fee for the coach and daily fee for the car, we were assigned our site.  Wayne drove the coach  and I drove the car.  The park ranger met us and suggested we take a look at site #142 instead of the one we've been assigned.  We took his advice and pulled around to #142. Wayne backed the coach as I guided him carefully.  Looking around for the hookups, there's no water spigot. The ranger said only electricity was provided at the sites. Bummer. Nobody said anything about that and I hadn't asked.  Wayne pulled around to the dump station and topped the fresh water tank.

Upon return to our site, I guided Wayne back into the site for the second time but something was going wrong.  I could see the sand shifting as the 43,000 rig crept back.  Wayne got out. It was true... we were sinking into the sand -- and getting more stuck with every second. The coach would never get out of this spot on it's own.


Wayne is such a patient man. After a single attempt to drive Endie out of the sandy predicament, he pulled out the little shovel and began moving sand from around the tires. He never complained and fortunately, didn't blame me.  At least not out loud.  I went to the park office to advise them of the situation. They didn't seem surprised but were sympathetic. In a few minutes, one of the park rangers and the campground host arrived on a golf cart with a long handled shovel and several boards.  Let's see how that worked out.


At the end of the afternoon, we opted to leave the coach sitting cockeyed for the night and worry about getting out tomorrow. Life is too short to sweat the small stuff, after all.  We didn't get to walk the path over to see the shore of Lake Michigan. Then insult was heaped on top of injury: Rain came in the early morning hours and it just didn't stop.

Endie was so terribly out of level that night we decided to forgo letting the large road side slide out for fear we'd cause frame damage. Next morning, roadside assistance was called and a wrecker was on site within a quarter hour.  They arrived quickly because they know exactly where to come.  "We pull big rigs from this sight regularly," the driver said. Super bummer.  That park ranger probably sits back laughing at everybody who gets stuck and then collects a kickback from wrecker fees.

Is this what they mean when they say "Smitten By The Mitten"? Hope not.

But we shall not be discouraged this easily!  Our next stop is Trailways Campground in Montague where the town's claim to fame is that it is home to the world's largest working weather vane.  And alas the thing stands right next door to the campground!  This location is about where the second joint of the little finger is on "the mitten".

The tiny cities of Montague and Whitehall are separated by White Lake. Trailways Campground and is across the street from the lake.  It suits us very well. The campground is owned by the city. It is small, clean and neat. Car and coach washing is allowed, the grocery store is next door and a 25 mile asphalt bike path runs alongside. The sites are gravel and level, there are concrete patios, grass and shade trees throughout. 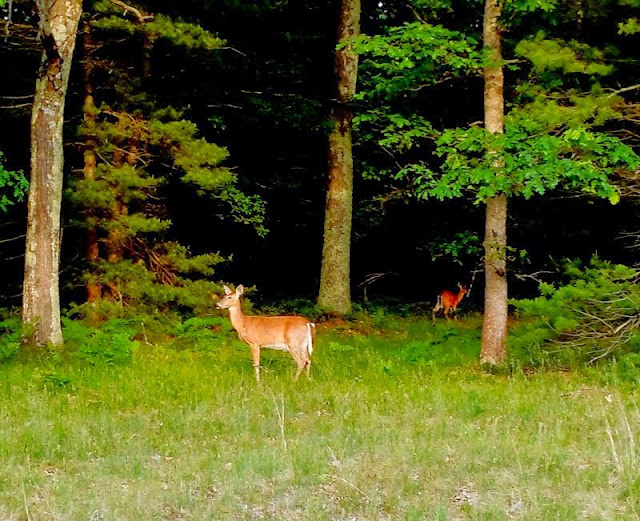 Still looking for our first glimpse of Lake Michigan, we drove westward along some roads that took us quickly out of town and into more of the deep, dark, dense forest that we're seeing so much of in Michigan.  Along with these deep forests, we've noticed that grass here is deep green with very few weeds and people here seem to relish yard care.

Our first look at Lake Michigan finally came when we found ourselves at old spot along the Old Channel Trail where, in the 1800's a fur trading post existed.  We parked the car and walked out onto the sandy shore of Lake Michigan.   ﻿ 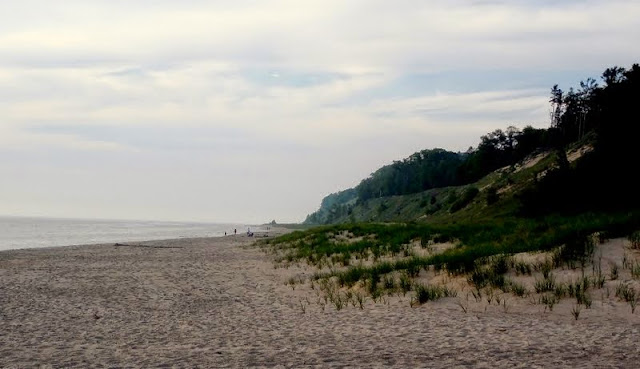 On the way back to the campground we stopped at Medbery Park where we saw the channel to White Lake. Across the channel we could see the White River Light Station and Museum.

The plan is to remain at the campground in Montague for a week. We have a few chores to do, including a thorough wash of Endie, before we move northward.
Email ThisBlogThis!Share to TwitterShare to FacebookShare to Pinterest