What fun we had at this railroad museum!  This was one of those great surprises we didn't expect.

Elkhart is a natural home for this museum: the gargantuan freight yard is the largest railroad freight classification yard east of the Mississippi River.

One of the busiest railroad lines in the entire Midwest runs every 15 minutes alongside this museum, adding a thrilling air of authenticity to our visit. It's the Norfolk Southern mainline.

The red brick building shown in both the picture above, and the one below, is the old Myers Laboratories building from where Alka Seltzer was concocted and shipped way back in the 1930's! Dr. Franklin Miles began Miles Laboratories in 1884 right here on this location in Elkhart, Indiana.

The creation of Alka Seltzer came about during a flu epidemic in 1928. It was then that the president of Miles Laboratories took note that a group of people who took an aspirin and baking soda at the first sign of illness never came down with the flu.  Given the task of creating a simple formula to duplicate the aspirin / baking soda formula into a single dose, the Miles Laboratories chief chemist created Alka Seltzer.  As a bonus, it made a refreshing, fizzy drink.  People liked it and it worked.

The New York Central Railroad was founded in 1853. It was one of the major railroads connecting the East Coast with the nation's interior. The railroad was a consolidation of 10 small railroads. Inside the museum we found a vast array of New York Central Railroad memorabilia and a huge model railroad. Because we happened to be the only patrons in the museum, Brian turned the lights down low and we got a thrilling nighttime view of the spectacular models below, in operation.

I should say here that Brian (photo above) is not an employee of the museum. He just hangs out there on his days off his day job as a dishwasher at Whole Foods.  Brian greeted us at the museum door when we arrived and we weren't sure what was going on with him.  We were never told the museum offered a "guided tour" but we sure got one!  Brian is a lifelong resident of Elkhart and has an extensive knowledge of the city's history and the life stories of both the NY Central railroad and trains in general.


With the removal of the raised roof caboose, the introduction of the bay window caboose came about. Yep, there's one of those in the museum yard too.  It's in the picture below.
﻿﻿
On down the line Brian pulled open a heavy rusted door and plowed through debris to show us inside this old club car.  It is scheduled to be restored. Even in it's terrible condition, it's easy for a train lover to see the excitement of the train passengers sitting at the tables.

The New York Central, at one time, used some 600 Mohawk steam locomotives like the one in the photo below.  Just two of them survive today and this is one of them.

If you find yourself in or around Elkhart, Indiana and if you have an interest in trains, I recommend spending an hour or so at this museum. If you're lucky, Brian will have a day and be there to show you around.  Here's a picture of the sign at the entrance. 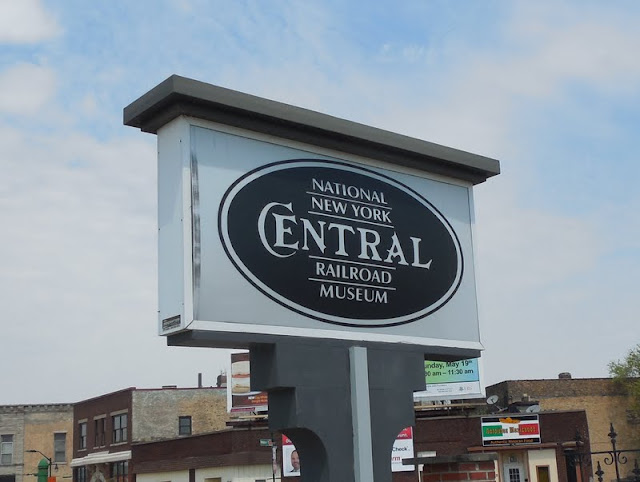 My Personal Connection to Elkhart


When I was born (waaaay back there), my immigrant father was unemployed.  Says so, right there on my birth certificate.  Within a few months, my parents loaded the car with our few belongings and drove to Elkhart from Alabama. My father would find work in the booming "trailer home" building business.   We stayed long enough to save a little money and then we promptly returned to the south where we belonged.  My southern raised mother never liked the north.


Elkhart, like so many cities these days, has a bunch of personalized statues.  Don't know exactly what this particular elk statue is suppose to represent.  It was just convenient for me to photograph.
We're in Elkhart for a few days to get Endie's squealing air bag valve repaired. After so many beautiful weather days, we had a terribly cold snap come through over the weekend. Temperatures will be rising as the week goes on.  Bad weather can't stop our exploration though.

Join us in a few days for a couple of memorable local stops.