We've been full-timing for nearly three years and until now, have not attended a single RV rally. No, we really don't feel deprived.  Rallies held little appeal to us as we enjoy traveling on our own without appointments, timetables or organized group outings.

Last January, while visiting the RV Supershow in Tampa, we were invited to join a loosely organized (or maybe disorganized) group for a spring gathering in Sevierville.  It's the Online Campers Rally.

We arrived at the designated Sevierville, Tennessee campground a week before the rally began. It's time to order the mail and spend a few days cleaning out the coach basement.  Visits to a few of our favorite haunts was needed too.  We are, after all, Tennesseans -- and it's nice to be here.

The afternoon the Online Campers rally was scheduled to commence, the rain began... again. So typical of this area in April.  Fortunately, we caught a break in the rain long enough for a covered dish get together in the pavilion, which is, luckily, just four campsites away. 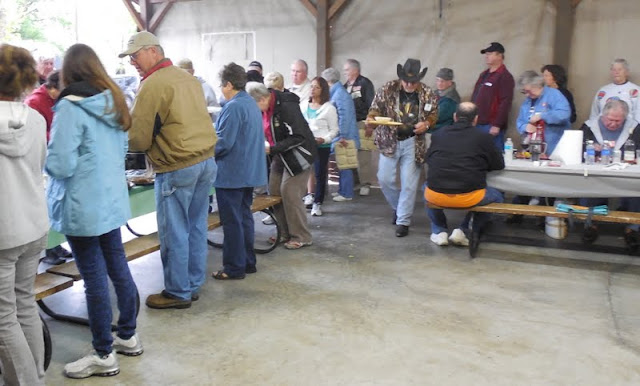 Pretty easy to see from the photo above, that while the temperature isn't real cold, it's not exactly warm here in Sevierville tonight.

The crowd for the rally is large with more than 80 "first time" participants.  Some recognizable names are among us. Florida traveling RV'ers know the Alliance Coach name but might not know the financial backers and owners, Judy and Alan Shapiro. The actor, Johnny Depp's father, John Depp, and his wife, are here too. All are in the picture above but I won't point them out.

Several shrimp boils are scheduled for the Online Campers rally as the schedule is coordinated by a lifelong resident of Louisiana.

The food each evening was great with some really fabulous desserts, but the concrete building was much too damp and cool for me to be comfortable.

We met dozens of nice folks during the four days (out of ten rally days) we were in Sevierville.

Rain fell steadily all day Saturday and Sunday. Wayne and I entertained ourselves by shopping and cooking rainy weather foods in the crock pot.

By Sunday afternoon, this is how the campground looked:
﻿
Because the Holiday Rambler RV Club's Chapter 419 Diesel Pusher's Annual Maintenance Session is scheduled to begin in early May, we'll leave this group early, allowing two driving days to reach Goshen, Indiana.

The final two days in Sevierville were clear and warming nicely and that's good for those who will be staying on for the remainder of the week.
Email ThisBlogThis!Share to TwitterShare to FacebookShare to Pinterest