Getting The Back On Track 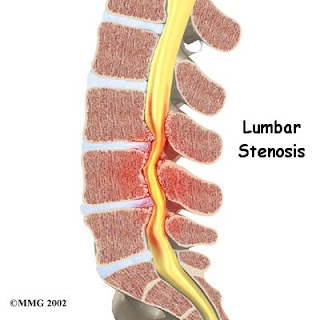 Wayne's back is out.

Two years ago, during his first ever 'bout with sciatica, medical tests showed he has spinal stenosis and degenerative disk disease.  No doubt his spine would look a bit like the image to the right if we could see it.

Since the sciatica episode of December 2010, Wayne has had occasional twinges of pain but this is worse -- much worse. The problem started Tuesday, while we were having the supplemental brake installed at Camping World in Junction City, Oregon.  As the day went along, he became almost unable to stand and finally mentioned the possibility of going to an area hospital in the early evening.  Sleep that night was fitful and by 3:30 Wednesday morning, he was awake. By 4:30, I was up too, worrying about his worsening condition. By 7:30 a.m., we were preparing to go to the emergency room.

In the end, he decided against the ER as we're about certain of the diagnosis and he still has the full Rx of pain medication and muscle relaxers.  I finally convinced him to take a round of his medication; he did and began feeling better within an hour.

Thursday, Friday and Saturday have been progressively better.  He is taking the medications as needed and alternating heat / ice on his lower lumbar. I'm giving him occasional alcohol rubdowns too.  Because the campground here in Harrisburg is having a full-house rally beginning Tuesday, we'll have to be ready to leave here by that time.

Today is Sunday and Wayne feels well enough to take a ride with me to the grocery store. He will stay in the car. This will be his first steps outside the coach in five days. That's unheard-of for Wayne.

Keeping my fingers cross that he will continue to recover without relapse.
Email ThisBlogThis!Share to TwitterShare to FacebookShare to Pinterest