The campground hosted a large wedding Saturday night and a baseball playoff group has been here all weekend. Frankly, the crowds of tough-guy, silly girl teens and the twenty-somethings are getting on my last nerve. It's time to take a day ride.

A cloudy day makes for good photography and today's weather is a bit overcast. It's cooler (60's) than we've had here in the Willamette Valley for the past two weeks (80's).

From the campground at Harrisburg, we drove about 40 miles east to Sweet Home, Oregon and then onto US 20 into the Cascade Mountains.  We're looking forward to seeing a few of the many covered bridges in this area.

Wooden bridges were covered to keep them dry. A covered bridge could easily last 80 years while an uncovered one would likely last less than ten..

Funding to preserve Oregon's covered bridges was established by the legislature in the 1980's.

I snapped the picture of the Crawfordsville Bridge (above) with almost no notice but it did turn out rather nice.  Below is a photo of the other side taken after we turned around and came back. 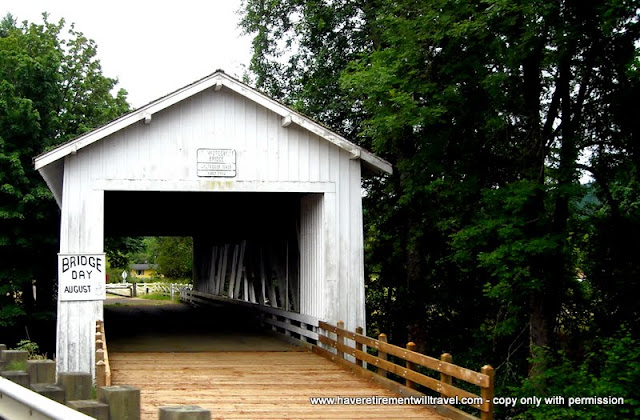 We drove through the tiny town of Sweet Home and came upon Weddle Covered Bridge in Sweet Home's Sanky Town Park.
Sweet Home is a small but pleasant place and seems to be a destination for many RV'ers.   Some are here, it seems, to enjoy nearby Fosters Lake / Reservoir, it's dam and nearby Green Peter Dam. Lots of state and county parks, many boats, fishermen and family campers.

Leaving Sweet Home we took US 20, following Santiam River into Willamette National Forest and into higher elevations. This route is called Oregon's "Over the River and Through the Woods" Scenic Byway.  It got cool and at one point, the car's thermometer reported 55 degrees outside.

All along the road I could see thick moss covering almost everything.  At one stop, I took a few pictures of the mossy trees...

We reached Tombstone Pass and then, at the intersection of Oregon Highway 126, turned south, going down the mountain range toward Blue River, where we found the river water really is blue.  For some reason, I don't have a picture of the blue water..... Blame it on the co-pilot / navigator / photographer / writer / dog momma.

Goodpasture Covered Bridge would be the last one we'd see today. It covers McKenzie River and appears to be the longest of the three covered bridges we saw.

Returning to the campground, we could see that most of the baseball and wedding crowds had left.   The late afternoon and early evening air was much cooler than it's been lately.  Our plan is to leave this area by Wednesday -- more about that later.
Email ThisBlogThis!Share to TwitterShare to FacebookShare to Pinterest