First:  There's Lava Lands
Oregon has a volatile volcanic history. Great piles of jagged black lava rocks give the appearance they've been dumped at a particular location. They're quite pretty in their own way.

Lava Land at Newberry National Volcanic Monument is south of Bend along US Highway 97. We came upon it by chance -- seeing giant heaps of large sharp black lava rock reaching out nearly to the highway.

At the sign bearing the simple name Lava Lands (I couldn't help but think of Lego Land in central Florida), we turned the rig in and then realized the road was narrow and the trees reached into them from above and both sides.  The coach is just four months old so we really worry about scratching it and try hard to avoid branches. Fortunately for us the gate attendant let us travel the wrong way down a one-way lane to park and then leave the park. Other rigs were in the parking lot but none as large as Big Endie and Blackie.

The parking lot at Lava Lands looked like a good place to walk Lexie and Ozzie -- or so it seemed until we got out and felt the cold blast of wind.  Oh my it was cold. We managed to walk to the Visitors Center where we took an abbreviated look over the closest lava field before rushing back to the coach.  After lunch we carefully crept the rig out of Lava Lands and back to Highway 97.

Today's destination is Chiloquin, Oregon from where we'll take in Crater Lake. Last year, traveling with DJ and Tom, we tried to come here but we were deterred by heavy snow accumulations and training cold weather bands.  This year we're "psyched" for winter weather... so much, in fact, that we're hoping we'll be in snow!

Settled in at Water Wheel Campground Friday afternoon, we check the weather for tomorrow's visit to Crater Lake.  Snow is predicted tonight (80% chance) with a freeze warning. Tomorrow's snow chance at Crater Lake is 40%, temperatures just above freezing and little chance of sunshine.  No matter -- we're making the short 30 mile trip, taking whatever layers of warm clothes we'll need.  Lexie and Ozzie have matching red plaid coats they hardly get to wear so they'll be warm too.  Incidentally,  their bed has a new warming pad to keep them cozy on the coldest of nights.

Saturday morning's sunshine was bright and beautiful, which thrilled us. We headed toward Crater Lake's southern entrance via Oregon Hwy 62.  Along the way, we passed the site of Fort Klamath in this beautiful valley surrounded by snow capped mountains.

It isn't far now to Crater Lake and my descriptions seem worthless, so from here, I'll let the photos show you what we saw... 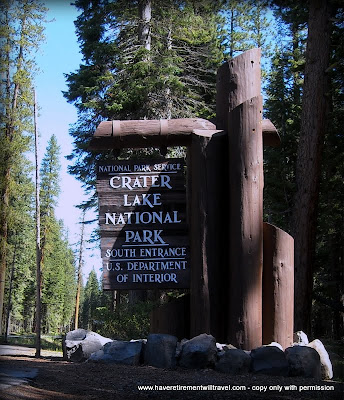 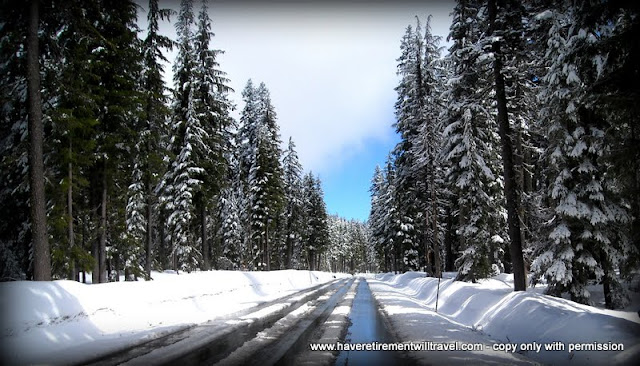 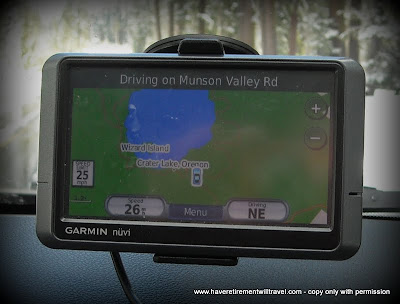 This is part of Cascade Range of volcanoes that start in British Columbia and end in northern California.  About 7 million years ago (who counted?) the Cascades began to rise and then "vented"' themselves. That activity led to the creation of Crater Lake. 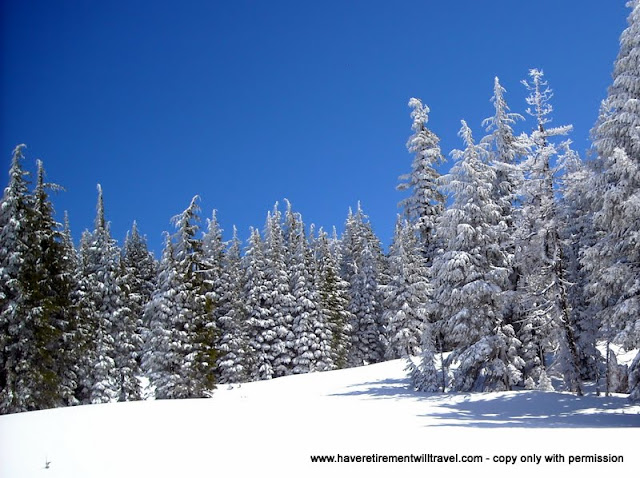 And then we caught our first glimpse of ... 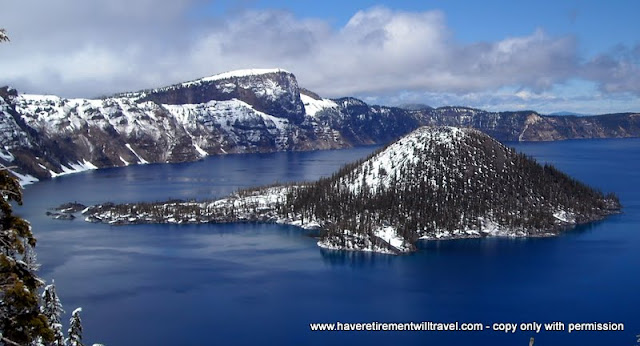 It began as 12,000 foot Mount Mazama until it rose and erupted. In the end, the empty mountain fell from it's own weight and collapsed -- forming a deep caldera where the snow-capped Mount Mazama once stood.  The basin filled with centuries of rain water and snow fall. Wizard Island, the cone-shaped island that stands above the water line, is a volcano formed from later eruptions.  Geologists estimate that it might have taken 800 years for the lake to fill with rain and snow.


Although most of the country enjoyed a mild winter this year, Crater Lake got 31 feet of snow.  The southern route into Crater Lake is open but the northern route is not.   None of the roads around the rim of the lake are open except a 1.1 mile stretch from Rim Village west to Discovery Point. The road in green in the map above is cleared for hiking and biking but not to autos.


Crater Lake Factoids...
6.02 miles (max) across, 4.54 miles (min) across.
1,943 deep at the deepest point. Deepest in the US.
4.9 trillion gallons of water -- and quite possibly the cleanest anywhere.
The water is from rain and snow. No streams or rivers feed into it.

The following photos were taken around Sinnott Memorial Overlook.  It's one of just two overlooks that can be reached by car today.

The Klamath Indians believed two great Chiefs, Llao of the World Below, and Skell of the Above World, fought a battle that ended in the destruction of Mt. Mazama, (the volcano that created Crater Lake). The Klamaths shielded this revered area from white explorers until 1853 when three gold prospectors happened to come here by accident.  But!  Gold being more important at that time than the discovery of this lake, it was soon forgotten.
The depth of Crater Lake was first sounded by US Geological Survey Party Captain Clarence Dutton. From the stern of his survey boat, Capt. Dutton gauged the depth of Crater Lake at 1,996' using lead pipe and piano wire.  That crude measurement was surprisingly close!
From Sinnott Memorial Overlook and Rim Village Visitors Center we drove the short distance to Crater Lake Lodge from where these pictures were taken:

These were taken at Discovery Point : 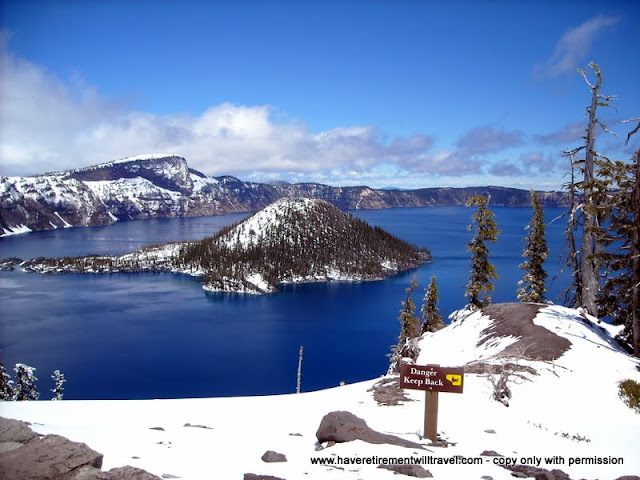 In the end, we feel we had about as perfect a day as possible for a visit to Crater Lake.  The fresh snow from the previous night was perfectly white, the skies were clear.   This could be my new favorite place.  I know... I say that about everything.