There are no water restrictions in southwestern Idaho -- evidenced by the irrigation of exit ramps along the interstate highways.  Hard to believe but true. Water spews, spits, sprays and spouts everywhere.  The Snake River winds throughout this part of Idaho and irrigation ditches funnel river water to farmlands. Endie and Big Blackie would become beneficiaries.  Our campground allows unlimited washing of vehicles so, over four days here, we washed (and waxed) both vehicles.

Our last full day at Caldwell, though, we explored Boise and found....
Boise State University is situated in downtown Boise along the Snake River. As college football fans, we were interested in seeing the campus and stadium. We explored and took these pictures.


Lady GaGa (our GPS) located another historical attraction that interested me. Idaho's Old State Penitentiary.  I find some weird fascination with prisons -- Wayne does not share the interest but indulges me whenever possible. 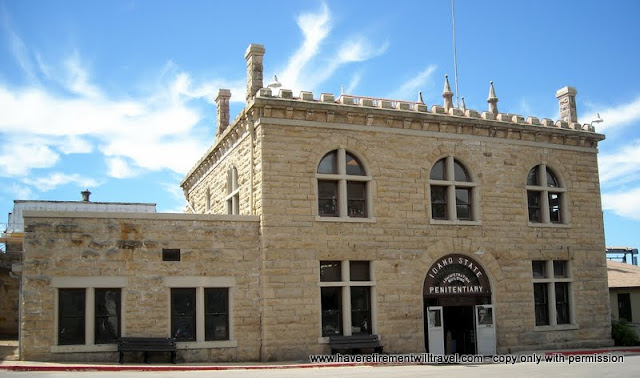 Self-guided tours were available of the old prison and I did so want to tour the dreaded place, but their policy did not allow dogs (imagine the nerve) so I did not take the tour -- settling instead for exterior pictures.


From the old prison we found and devoured yet another lunch of Five Guys Hamburgers and Fries.  About those Idaho potatoes.... Driving across the entire width of the lower part of Idaho, I saw lots of farmland but almost no potato fields.  I'm no farmer mind you, but I do know that potato plants have leaves and that's not what I saw along the highways we traveled.  Plenty of grain and a gazillion bales of beautiful green hay.... but I'm not seeing any potatoes or potato processing facilities.

Now that was odd to me.   I'm just saying what I saw -- and didn't see.
Email ThisBlogThis!Share to TwitterShare to FacebookShare to Pinterest